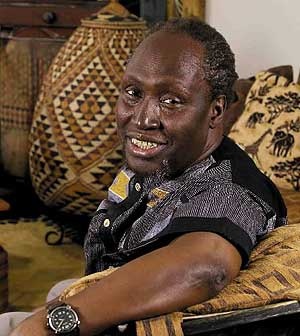 (GIN) – In a new book entitled "Dreams in a Time of War, a Childhood Memoir," acclaimed Kenyan author Ngugi was Thiong'o recounts his life as the fifth child of his father's third wife in a family that included twenty-four children born to four different mothers.
With war the backdrop for his colonial childhood, Ngugi's mothers formed a kind of family government: Njeri was "the defense minister of the household" who "brooked no nonsense from anyone;" Gacoki, "shy and kind" was "the minister of peace;" his hard-working, laconic mother WanjikÅ© was "the minister of works;" and the calm and beautiful Wangari "the minister of culture."
"Somehow, in time, I learned that our land was not quite our land; that our compound was part of property owned by an African landlord, Lord Reverend Stanley Kahahu, or Bwana Stanley as we called him; that we were now ahoi, tenants-at-will. How did we come to be ahoi on our own land?" Ngugi asks in this remarkable book. His answers, over 256 pages, are both provocative and profound.
Professor of English and Comparative Literature at the University of California, Irvine, and director of the school's International Centre for Writing and Translation, Ngugi has written several books including Petals of Blood, for which he was imprisoned by the Kenyan government in 1977. (Pantheon Books.)