Skin: The Story of a Real-Life Nightmare in Apartheid South Africa 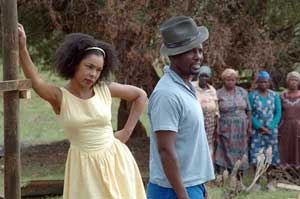 Until 1994, South Africa's system of Apartheid forbade people of different "races" to use the same stores, to attend the same schools or to reside under the same roof. Those oppressive segregation laws came to rip an Afrikaner family apart after the wife gave birth to a baby with dark skin and nappy hair in 1955.
Abraham (Sam Neill) and Sannie Laing (Alice Krige) raised a lot of eyebrows when they brought a brown newborn back from the hospital. While some neighbors suspected that the wife must have cheated, doctors did a blood test which determined that Abraham was in fact the father.
So, the couple had young Sandra (Sophie Okonedo) declared officially White and did their best to raise her in their lily white neighborhood. But as soon as she started school, the little girl was

teased by her classmates and even beaten by teachers until complaints from other parents about the "kaffir" on campus forced the principal to expel Sandra. And when the authorities subsequently reclassified their daughter as "coloured," the Laings had to register her as a domestic servant just so that she could live at home legally.
This real-life nightmare is the subject of "Skin," a heartbreaking bio-pic based on Judith Stone's best seller "When She Was White: The True Story of a Family Divided by Race." Adapted to the screen by Anthony Fabian, the picture effectively exposes the silliness of arbitrary groupings based on skin color.
Unfortunately, apartheid really did exist, and the case of the Laings turned terribly tragic, since Sandra ended up estranged from her parents by the age of 15. She ran away from home pregnant to live on the other side of the proverbial tracks, in a Black township with a married man. There, she proceeded to make a series of self-destructive choices, bearing numerous children out of wedlock she had to surrender to foster care.
Penniless, she attempted to reconcile with her folks, only to be told by her mother never to call or visit again. A frightening primer on how untreated racism can lead someone to abandon, even hate their own offspring.
Excellent (4 stars)
Rated PG-13 for violence, sexuality and mature themes.
Running time: 107 minutes