Special to the NNPA from Gin
Published: 25 August 2009 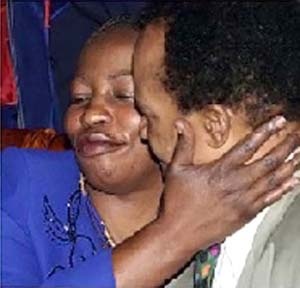 (GIN) – Former Zambian President Frederick Chiluba exulted after he was acquitted of misappropriating half a million dollars in public funds, in a trial seen by some as a test case of anti-corruption efforts.
"Those who thought I was a thief should know now that I am innocent," Chiluba declared after the verdict.
A parallel case against Chiluba and 19 associates held in a British court, tried by the Attorney General of Zambia, had found the former leader guilty of funneling $45 million for his own expenses. These were described as luxury items including hundreds of suits and monogrammed shirts from an exclusive Swiss boutique, as well as 72 pairs of handmade shoes.
In the Zambia hearing, the ex-president refused to cooperate, portraying himself as the victim of a political witch-hunt.
Chiluba, a former reformer and trade union leader, served two terms in office between 1991 and 2002. His wife, Regina, was convicted in March by a Zambian court of receiving stolen goods but was freed pending appeal and was in court with her husband to witness the acquittal.
Meanwhile, in Nigeria, anti-corruption police are seeking 19 bank executives for questioning following a $2.6 billion bailout of five struggling financial institutions by the central bank.
Regulators said lax governance had allowed the banks to become so weakly capitalized that they posed a threat to the banking system in sub-Saharan Africa's second biggest economy.