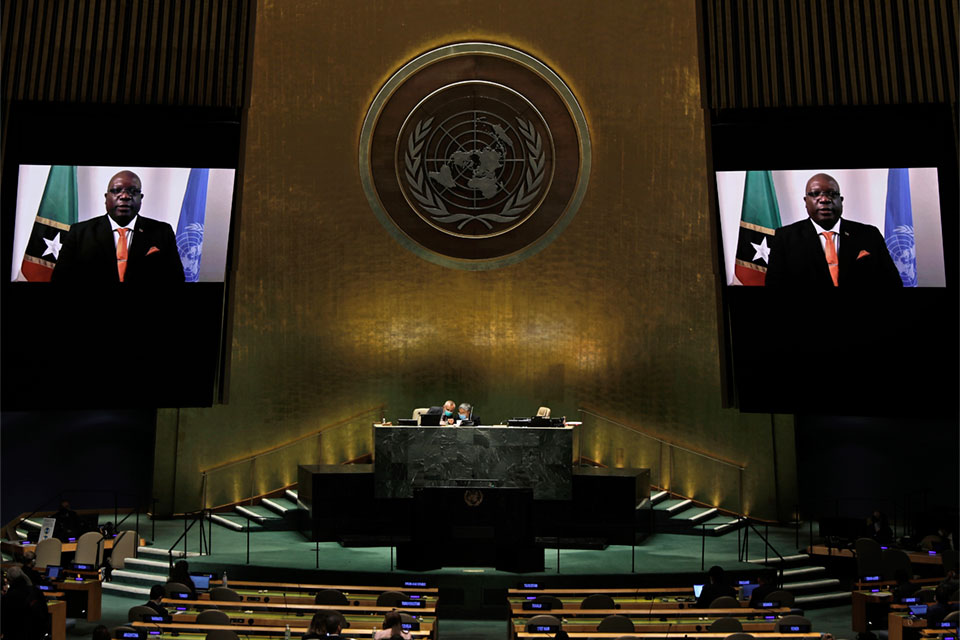 More than a year after Black Lives Matter protests launched a worldwide reckoning about the centuries of racism that Black people continue to face, the question of reparations emerged — unevenly — as a high-profile issue at this year’s largest gathering of world leaders.

At the U.N. General Assembly, African and Caribbean countries that stand to benefit from reparations were backed by other nations, though those most responsible for slavery and colonialism said little about what they might owe to African descendants.

Leaders from Africa (South Africa and Cameroon) to the Caribbean (Saint Kitts & Nevis and Saint Lucia) were joined by representatives of countries that are unlikely to be tapped to pay up — Cuba and Malaysia among them — in explicitly endorsing the creation of reparation systems.

Those missing from the renewed global conversation on the topic, though, were noteworthy as well: the United States, Britain and Germany, wealthy and developed nations built from conquests of varying kinds.

“Caribbean countries like ours, which were exploited and underdeveloped to finance the development of Europe, have put forward a case for reparations for slavery and native genocide, and we expect that case to be treated with the seriousness and urgency it deserves,” said Philip J. Pierre, prime minister of Saint Lucia.

“There should be no double standards in the international system in recognizing, acknowledging and compensating victims of crimes against humanity.”

A look at who is and isn't talking about the issue this past week is a sign that while the movement supporting literal payback to the African continent and the forced diaspora that ravaged it, is growing. The substantive engagement of major powers — however apologetic — is limited.

U.S. President Joe Biden, for example, made no mention of it in his address, though the White House earlier this year said it supported studying reparations for Black Americans. And the office of its U.N. Ambassador Linda Thomas-Greenfield, who is African American, wouldn't comment on the recent reparations discussions.

Monetary atonement for America’s history of slavery is a seminal question in the world’s attempt to reconcile with what South African President Cyril Ramaphosa called “one of the darkest periods in the history of humankind, and a crime of unparalleled barbarity.”

“Its legacy persists in the Americas, the Caribbean, Europe, the Middle East, and in Africa itself,” Ramaphosa said at a meeting on reparations during the General Assembly.

“Millions of the descendants of Africans who were sold into slavery remain trapped in lives of underdevelopment, disadvantage, discrimination and poverty.”

Slavery in what became the United States began more than 400 years ago with slaves forcibly transported by ship from Africa. The debate about reparations has been ongoing ever since slavery was abolished in 1865.

In recent years, the issue has languished in Congress for more than three decades, though reparations have gained traction in a smattering of cities and local governments as the country continues to grapple with fallout from the death of George Floyd in 2020.

Carla Ferstman, an international law expert who studies reparations as a professor at the University of Essex, said the U.N. talks this session mark a significant milestone for the global reparations movement that has been brewing for 20 years.

What remains to be seen is how it unfolds between individual nations — and how transformative the results are. While each reparations program would specifically be between the perpetrators and the victims' descendants, the conversation to rectify wrongs in history has now become universal.

Valued reparations to address harm could come in the form of direct financial payments for individuals, developmental aid for countries, the return of colonized land, treasured artifacts and cultural items, systemic corrections of policies and laws that may still oppress, and the kind of full-throated apologies and acknowledgements that wipe aside certain historical figures that were once celebrated as national heroes.

“People perceive their harms in very different ways — this perception of how the wrongs happened and how they manifested in terms of later generations,” Ferstman said. "One needs to be sensitive to what is important and how to best rectify.”

The latest discussions on reparations came as the U.N. commemorated an important but contentious 2001 anti-racism conference in South Africa that resulted in what is known as the Durban Declaration.

A new resolution adopted at the commemoration meeting last Wednesday acknowledged some progress but deplored what it called a rise in discrimination, violence and intolerance directed at people of African heritage and many other groups — from the Roma to refugees, the young to the old, people with disabilities to displaced people.

There was even a discussion devoted to reparations, though it didn't go unnoticed during that talk that last week’s new declaration stopped short of demanding nations must pay reparations to those their government harmed.

It said only that there should be a way for descendants to seek “just and adequate reparation or satisfaction for any damage suffered.” That was despite the U.N. Human Rights Council’s explicit recommendation for reparations in a major milestone report in June.

“While reparations could not compensate or right all the wrongs that had been done against the people of African descent, they could go a long way in addressing systemic racism that still lingers in the society today, in bringing about a level playing field to realize their true potentials,”

The United States, Britain and Germany were among the dozens of countries that didn’t attend the Durban commemoration last week because of persisting grievances about the conference 20 years ago, when the U.S. boycotted it over references to the Israel-Palestinian conflict.

The U.K. Foreign, Commonwealth and Development Office said it did not dispute the horrors of slavery and colonialism, but that it was focused on solving today's problems. It said in a statement: “While we acknowledge that the wounds run very deep, we believe that the most effective way for the U.K. today to respond to the cruelty of the past is to ensure that current and future generations do not forget what happened, and to address modern-day slavery and racism.”

Germany’s president, in his General Assembly address, didn’t mention reparations, though his is one of the few countries that have directed money to make up for its colonial-era actions.

Early this year, Germany officially recognized the massacre of tens of thousands of people in Namibia as genocide and agreed to provide 1.1 billion euros ($1.3 billion) for projects that are expected to stretch over 30 years to help the communities affected. That announcement pointedly did not label Germany's initiative as formal reparations.

Facing journalists this week at the United Nations who sought answers on Namibia, German Foreign Minister Heiko Maas said his country continues to negotiate proposals with the African leaders.

“(T)he results that have been achieved have been achieved with the desire to finally reach an outcome, though not a conclusion, with regard to this truly difficult chapter of German history," Maas said. “For in fact, it is only the beginning of a period of very, very intensive cooperation between Germany and Namibia.”