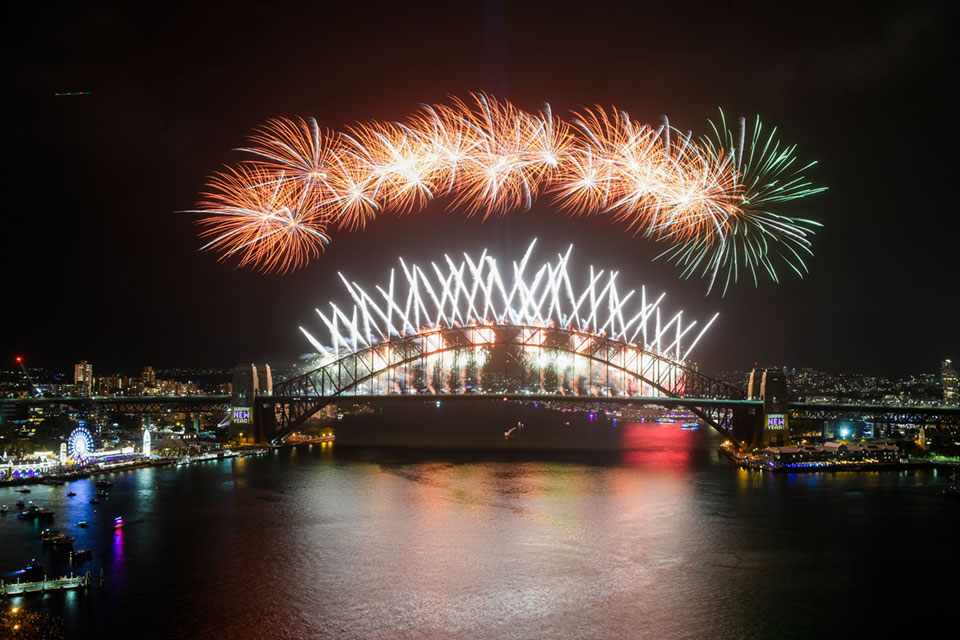 Revelers around the globe are bidding farewell to a decade that will be remembered for the rise of social media, the #MeToo movement and, of course, President Trump. 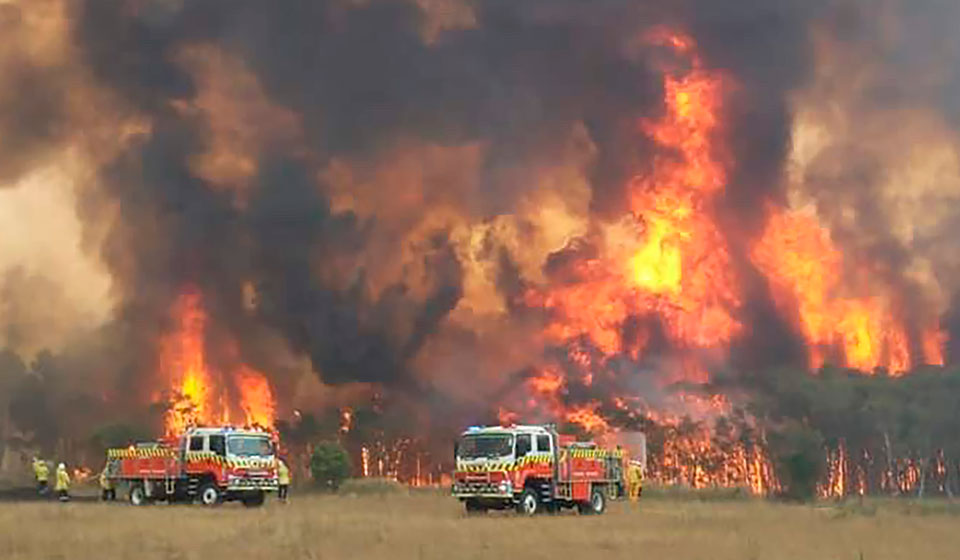 In this image dated Dec. 30, 2019, and provided by NSW Rural Fire Service via their twitter account, firefighters are seen as they try to protect homes around Charmhaven, New South Wales. Wildfires burning across Australia's two most-populous states Tuesday trapped residents of a seaside town in apocalyptic conditions, destroyed many properties and caused fatalities. (Twitter@NSWRFS via AP)

More than a million people descended on a hazy Sydney Harbour and surrounding areas ahead of the ringing in of the new year despite the ongoing wildfire crisis ravaging New South Wales, Australia's most populous state.

The 9 p.m. fireworks over Sydney's iconic landmarks was delayed by 15 minutes due to strong winds, but revelers clearly enjoyed themselves in a desperately needed tonic for the state.

New South Wales has copped the brunt of the wildfire damage, which has razed more than 1,000 homes nationwide and killed 12 people in the past few months.

Some communities have canceled New Year's fireworks celebrations, but Sydney Harbour's popular display was granted an exemption to a total fireworks ban that is in place there and elsewhere to prevent new wildfires. 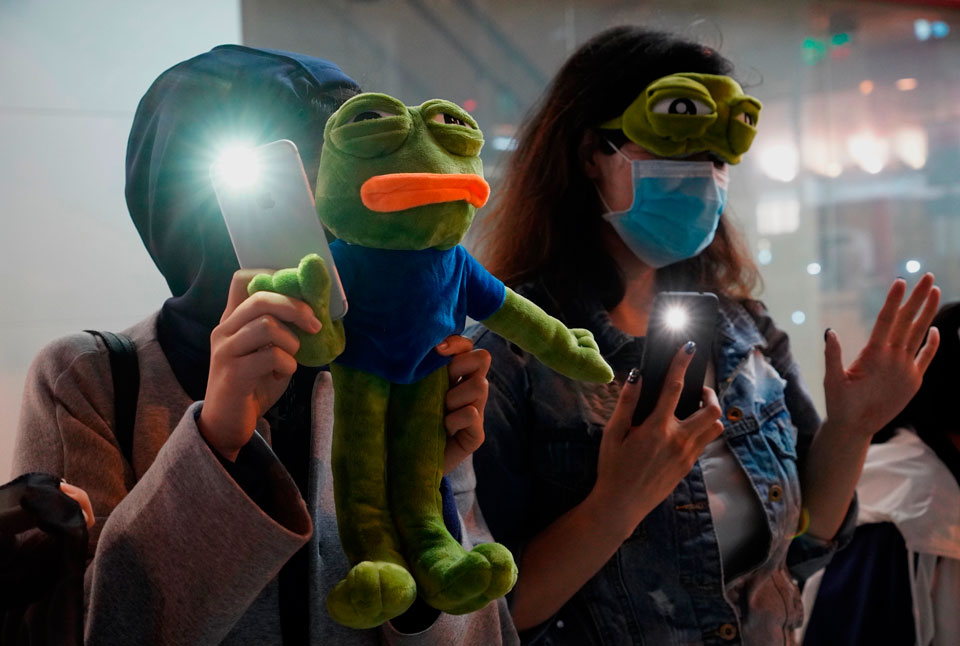 People raise their cellphones lights and stuffed frog toy as they form a human chain on New Year's eve in Hong Kong, Tuesday, Dec. 31, 2019. Months of pro-democracy protests have brought “sadness, anxiety, disappointment and even rage,” the city’s leader Carrie Lam said in a News Year’s address Tuesday. Protests that began in June over a proposed extradition law have spread to include demands for more democracy and other grievances. (AP Photo/Vincent Yu)

Revelers, as well as pro-democracy protesters, flocked to sites across Hong Kong to usher in 2020.

The semi-autonomous Chinese city has toned down New Year's celebrations amid the monthslong demonstrations. The protests have repeatedly sparked pitched battles with police and have taken their toll on Hong Kong's nightlife and travel industries.

A fireworks display that traditionally lights up famed Victoria Harbor was canceled amid safety concerns, while some roads were closed and barriers set up in the Lan Kwai Fong nightlife district for crowd control. 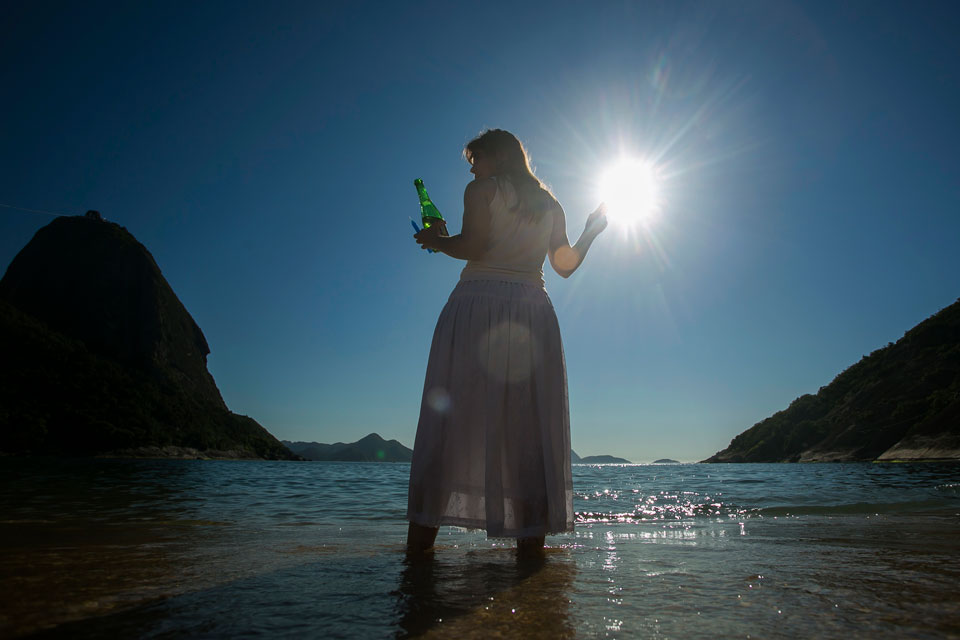 A woman holds a bottle of sparkling cider as an offering to Yemanja, a deity from the African Yoruba religion, during a ceremony in honor of the goddess of the sea, which is part of New Year celebrations on Praia Vermelha beach in Rio de Janeiro, Brazil, Tuesday, Dec. 31, 2019. As the year winds down, Brazilian worshippers of Yemanja celebrate the deity and ask for blessings for the coming year. (AP Photo/Bruna Prado)Russians began the world's longest continuous New Year's Eve with fireworks and a message from President Vladimir Putin urging them to work together in the coming year.

Putin made the call in a short speech broadcast on television just before the stroke of midnight in each of Russia's 11 time zones.

"We are living in turbulent, dynamic and controversial times, but we can and should do everything for Russia to develop successfully and so that everything in our lives can change only for the better," he said.

As is tradition, the recorded message was followed by an image of the Kremlin Clock and the sound of its chimes. State TV showed footage of extensive festive fireworks in cities of the Far East.

But one holiday tradition is missing in Moscow this year — a picturesque layer of snow. The Russian capital has had an unusually warm December and temperatures in central Moscow as midnight approached were just above freezing. 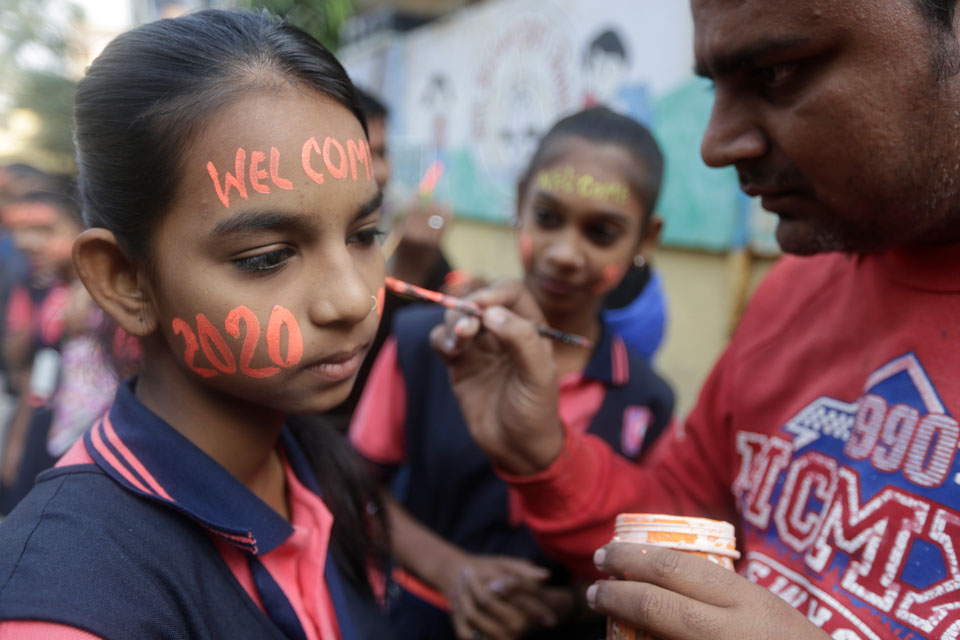 An Indian student gets her face painted during an event to welcome the New Year in Ahmadabad, India, Tuesday, Dec. 31, 2019. (AP Photo/Ajit Solanki)New Zealand's major cities greeted the new year with traditional fireworks. In Auckland, half a ton of fireworks burst from the Sky Tower above the city center.

New Zealanders appeared happy to be done with a year of national challenges, both natural and man-made.

On March 15, a lone gunman identified killed 51 people and wounded dozens at two mosques in the South Island city of Christchurch. In December, an eruption of volcanic White Island off the east coast of the North Island killed at least 19 tourists and tour guides.

The Pacific island nation of Kiribati was one of the first countries to welcome the new decade. The nation's 3,200 coral atolls are strewn more than 3 million square miles, straddling the equator.

As the new year begins, Kiribati finds itself on the front line of the battle against climate change, facing drought and rising sea levels.

In 2020, a project funded by the World Bank, Asian Development Bank, Green Climate Fund and Kiribati's government brings hope of providing safe and climate-secure drinking water to the main island of Tarawa, which is home to most of the nation's 110,000 people. 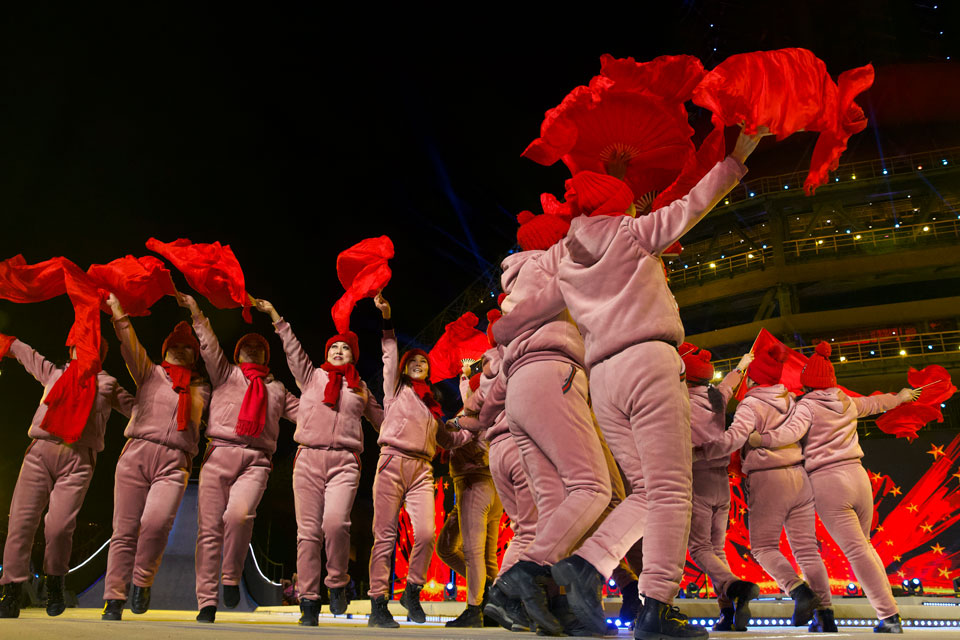 Performers rehearse before a New Year's Eve countdown event at the 2022 Beijing Winter Olympic headquarters in Bejiing, Tuesday, Dec. 31, 2019. Revelers around the globe are bidding farewell to a decade that will be remembered for the rise of social media, the Arab Spring, the #MeToo movement and, of course, President Donald Trump. (AP Photo/Ng Han Guan)In Samoa, New Year's Eve was more somber than usual. While fireworks erupted at midnight from Mount Vaea, overlooking the capital, Apia, the end of the year was a time of sadness and remembrance.

A measles epidemic in late 2019 claimed 81 lives, mostly children under 5.

More than 5,600 measles cases were recorded in the nation of just under 200,000. With the epidemic now contained, the Samoa Observer newspaper named as its Person of the Year health workers who fought the outbreak.

"We have experienced extreme sadness and sorrow," the newspaper said. "Since the first measles death, the pain has only deepened. But amidst much hopelessness and tears, we have also seen the best of mankind in this country's response."

People flocked to temples and shrines in Japan, offering incense with their prayers to celebrate the passing of a year and the the first New Year's of the Reiwa era.

Under Japan's old-style calendar, linked to emperors' rules, Reiwa started in May, after Emperor Akihito stepped down and his son Naruhito became emperor.

Although Reiwa is entering its second year with 2020, Jan. 1 still marks Reiwa's first New Year's, the most important holiday in Japan.

"We have a new era and so I am hoping things will be better, although 2019 was also a good year because nothing bad happened," said Masashi Ogami, 38, who ran a sweet rice wine stall at Zojoji Temple in Tokyo.

Other stalls sold fried noodles and candied apples, as well as little figures and amulets in the shape of mice, the zodiac animal for 2020. Since the Year of the Mouse starts off the Asian zodiac, it's associated with starting anew.

The first year of the new decade will see Tokyo host the 2020 Olympics, an event that is creating much anticipation for the entire nation.

Tens of thousands of revelers in Indonesia's capital of Jakarta were soaked by torrential rains as they waited for New Year's Eve fireworks.

Festive events along coastal areas near the Sunda Strait were dampened by a possible larger eruption of Anak Krakatau, an island volcano that erupted last year just ahead of Christmas Day, triggering a tsunami that killed more than 430 people.

The country's volcanology agency has warned locals and tourists to stay 2 kilometers (1.3 miles) from the volcano's crater following an eruption Tuesday that blasted ash and debris up to 2,000 meters (6,560 feet) into the air. 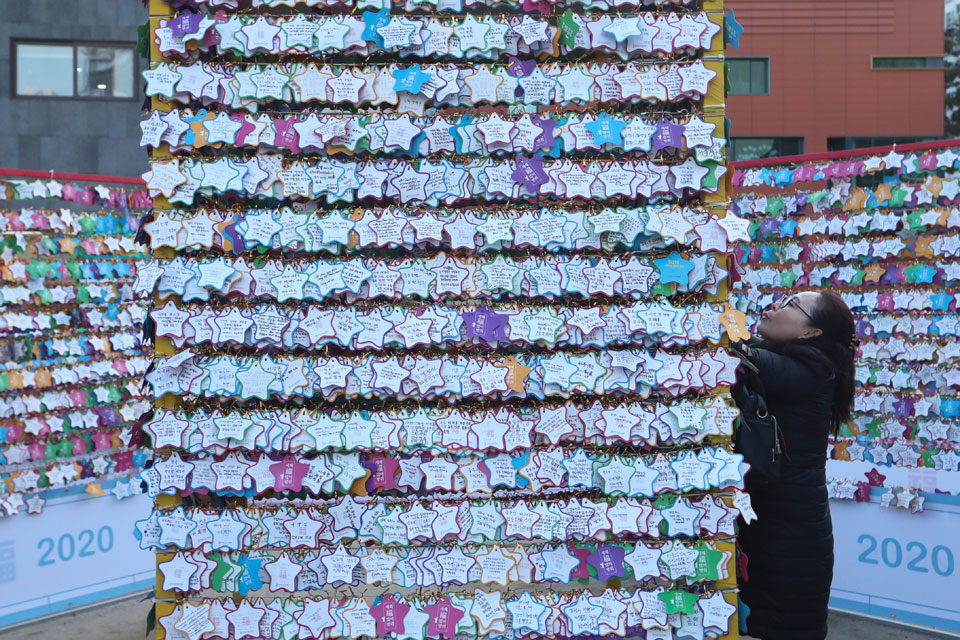 Thousands of South Koreans filled cold downtown streets in Seoul ahead of a traditional bell-tolling ceremony near City Hall to send off an exhausting 2019 highlighted by political scandals, decaying job markets and crumbling diplomacy with North Korea.

Dignitaries ringing the old Bosingak bell at midnight included South Korean Major League Baseball pitcher Hyun-Jin Ryu and Pengsoo, a giant penguin character with a gruff voice and blunt personality that emerged as one of the country's biggest TV stars in 2019.

The annual tolling of the "peace bell" at Imjingak park near the border with North Korea was canceled due to quarantine measures following an outbreak of African swine fever.