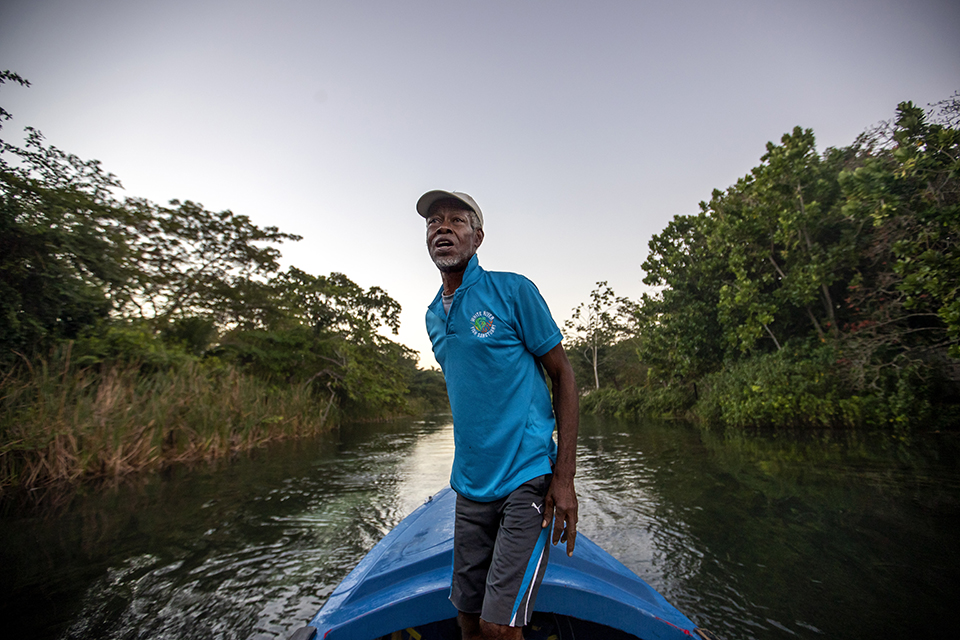 He steers the boat to an unmarked spot he knows as the "coral nursery." ''It's like a forest under the sea," he says, fastening his oxygen tank before tipping backward into the azure waters. He swims straight down 25 feet carrying a pair of metal shears, fishing line and a plastic crate.

On the ocean floor, small coral fragments dangle from suspended ropes, like socks hung on a laundry line. Simpson and other divers tend to this underwater nursery as gardeners mind a flower bed — slowly and painstakingly plucking off snails and fireworms that feast on immature coral.

When each stub grows to about the size of a human hand, Simpson collects them in his crate to individually "transplant" onto a reef, a process akin to individually planting each blade of grass in a lawn.

Even fast-growing coral species add just a few inches a year. And it's not possible to simply scatter seeds.

A few hours later, at an underwater site called Dickie's Reef, Simpson uses fishing line to tie clusters of staghorn coral onto rocky outcroppings — a temporary binding until the coral's limestone skeleton grows and fixes itself onto the rock. The goal is to jumpstart the natural growth of a coral reef. And so far, it's working.

Almost everyone in Jamaica depends on the sea, including the energetic 68-year-old Simpson.

Once a spear fisherman and later a scuba-diving instructor, he started working as a "coral gardener" two years ago — part of grassroots efforts to bring Jamaica's coral reefs back from the brink.

Coral reefs are often called "rainforests of the sea" for the astonishing diversity of life they shelter.

Just 2 percent of the ocean floor is filled with coral, but the branching structures sustain a quarter of all marine species. Clown fish, parrotfish, groupers and snappers lay eggs and hide from predators in the reef's nooks and crannies, and their presence draws eels, sea snakes, octopuses and even sharks. In healthy reefs, jellyfish and sea turtles are regular visitors.

With fish and coral, it's a codependent relationship — the fish rely on the reef to evade danger and lay eggs, and they also eat up the coral's rivals.

After a series of natural and man-made disasters in the 1980s and 1990s, Jamaica lost 85 percent of its once-bountiful reefs. Meanwhile, fish catches declined to a sixth of what they had been in the 1950s, pushing families depending on seafood closer to poverty.

Many scientists thought most of Jamaica's coral reef had been permanently replaced by seaweed, like jungle overtaking a ruined cathedral.

But today, the corals and tropical fish are slowly reappearing, thanks in part to a series of careful interventions.

The delicate labor of the coral gardener is only one part of restoring a reef. Convincing lifelong fishermen to curtail when and where they fish and controlling the surging waste dumped into the ocean are even trickier endeavors.

"When you give nature a chance, she can repair herself," says Stuart Sandin, a marine biologist at the Scripps Institution of Oceanography in La Jolla, California. "It's not too late."

Sandin is studying the health of coral reefs around the world as part of a research project called the "100 Island Challenge." His starting assumption was that the most populated islands would have the most degraded habitats, but he found instead that humans can be either a blessing or a curse, depending on how they manage resources.

When Jamaica's fish populations began to collapse two decades ago, something had to change.

In the past 10 years, more than a dozen grassroots-run coral nurseries and fish sanctuaries have sprung up, supported by small grants from foundations, local businesses such as hotels and scuba clinics, and the Jamaican government.

At the White River Fish Sanctuary, which is only about 2 years old and where Simpson works, the clearest proof of early success is the return of tropical fish that inhabit the reefs — as well as hungry pelicans, skimming the surface of the water to feed on them.

The solution was to create a protected area for immature fish to reach reproductive age before they are caught.

Most of the more established fishermen, who own boats and set out lines and wire cages, have come to accept the no-fishing zone. But some younger men still hunt with lightweight spearguns, swimming out to sea and firing at close-range. These men — some of them poor and with few options — are the most likely trespassers.

Once it became clear that a no-fishing zone actually helped nearby fish populations rebound, however, it became easier to build support. The number of fish in the Oracabessa Bay Fish Sanctuary has doubled between 2011 and 2017, according to Jamaica's National Environment and Planning Agency. And that boosts catches in surrounding areas.

Oracabessa was the first of the grassroots-led efforts to revive Jamaica's coral reefs. Its sanctuary was legally incorporated in 2010, and its approach of enlisting local fishermen as patrols became a model for other regions.

After word got out about Oracabessa, other regions wanted advice.

"The fishermen are mostly on board and happy — that's the distinction. That's why it's working," sanctuary manager Inilek Wilmot says.

Belinda Morrow, a lifelong water-sports enthusiast who runs the White River Marine Association, notes that, in Jamaica, "We all depend on the ocean."

"If we don't have a good healthy reef and a good healthy marine environment, we will lose too much," she says. "Too much of the country relies on the sea."

This Associated Press series was produced in partnership with the Howard Hughes Medical Institute's Department of Science Education. The AP is solely responsible for all content.