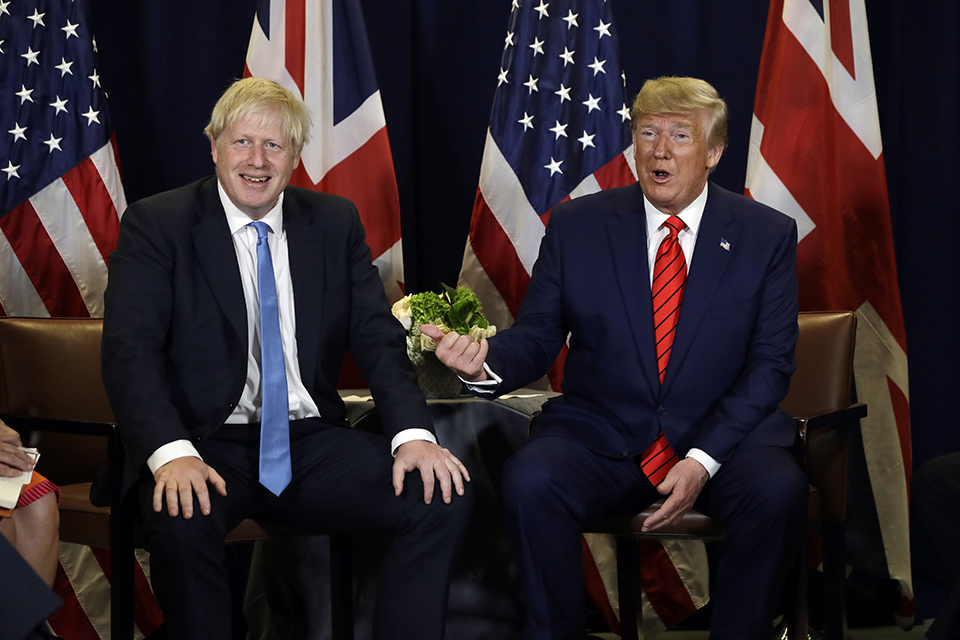 LONDON (AP) — In a decision that badly undermines Boris Johnson's authority, Britain's highest court ruled unanimously Tuesday that the prime minister broke the law by suspending Parliament in a way that squelched legitimate scrutiny of his Brexit plan.

The historic move by Britain's Supreme Court offered a ringing endorsement of Parliament's sovereignty and slapped down what it viewed as Johnson's attempt to use executive power to silence the legislature.

House of Commons Speaker John Bercow welcomed the decision, saying citizens are "entitled" to have Parliament in session to review the government and enact laws.

The ruling was not soft on the prime minister. The court said Johnson's suspension of Parliament never formally took effect, opening the door for Parliament to resume its duties Wednesday morning as if nothing had happened.

It also established that Johnson had involved Queen Elizabeth II — one of the most revered and respected figures in British life — by giving her improper advice when he sought her permission to shutter Parliament for five weeks.

Johnson said he objected to the ruling but will comply.

"I have the upmost respect for our judiciary. I don't think this was the right decision," Johnson said in New York, where he is attending the U.N. General Assembly. The suspension of Parliament "has been used for centuries without this kind of challenge."

The ruling could not have been clearer. Reading a unanimous decision by the 11 highest judges in the land, Supreme Court President Brenda Hale said the prime minister had acted illegally.

"It is impossible for us to conclude, on the evidence which has been put before us, that there was any reason — let alone a good reason — to advise her majesty to prorogue Parliament for five weeks," she said. "We cannot speculate, in the absence of further evidence, upon what such reasons might have been. It follows that the decision was unlawful."

The suspension "had the effect of frustrating or preventing the ability of Parliament to carry out its constitutional functions without reasonable justification," Hale said.

The judges made clear that they were criticizing Johnson, not the queen, who as a constitutional monarch was required to approve his request.

The ruling forced a chastened Johnson to cut short his trip to New York to fly home overnight in time for Parliament's unexpected session, where he will undoubtedly face a crescendo of calls to resign after his judicial humiliation.

The demands started on the courthouse steps moments after the verdict came in when Scottish National Party lawmaker Joanna Cherry, one of the legislators who had brought the legal case against Johnson, said he must step down immediately.

"His position is untenable, and he should have the guts for once to do the decent thing and resign," she said.

The prime minister remains on a collision course with Parliament over his determination to sever Britain from the European Union on Oct. 31 even if no divorce deal is reached. Parliament has passed a law requiring him to seek an extension if there is no deal, but Johnson says he will not do that under any circumstances.

He may be tempted to defy Parliament, but the Supreme Court ruling on the suspension suggests the courts will not look kindly on such a tactic.

Labour Party legislator Jon Trickett said the opposition will seek to have Johnson appear Wednesday in Parliament to explain his actions.

"I suspect we will be summoning the prime minister to Parliament to make a statement," he said. "We want to hear what legal advice he was acting on, why he ended up in court and being ruled in this quite extraordinary way."

Labour Party leader Jeremy Corbyn and other opposition leaders from a wide array of parties called for Johnson to step down.

Johnson strode to power in late July after easily winning a Conservative Party leadership race to succeed Theresa May. He boldly promised Britain would leave the European Union by the Oct. 31 deadline and dominated the news in his first weeks at 10 Downing Street while Parliament was on its summer break.

Since then, however, he has suffered a remarkable string of defeats.

He lost six consecutive important votes in Parliament, saw his working majority in Parliament evaporate, had his own brother step down from a government post in protest and even failed to get the legislature to back his call for a national election.

Now his suspension of Parliament has been nullified, and feisty lawmakers may use the sessions to look for new ways to make sure Britain does not leave the EU without a deal in place.

It is also possible, although no one in the public will ever know, that the queen — who has been holding weekly private meetings with prime ministers since the days of Winston Churchill — will have questions about Johnson's advice and requests.

Nonetheless, Johnson plans to press on with his Brexit strategy. He reiterated Tuesday that Brexit will happen Oct. 31 and said he is focused on reaching a new deal with the EU before then.

"As the law currently stands, the U.K. leaves the EU on Oct. 31 come what may. But the exciting thing for us now is to get a good deal. And that is what we are working on," Johnson said in New York. "And to be honest, it is not made much easier by this kind of stuff in Parliament or in the courts."