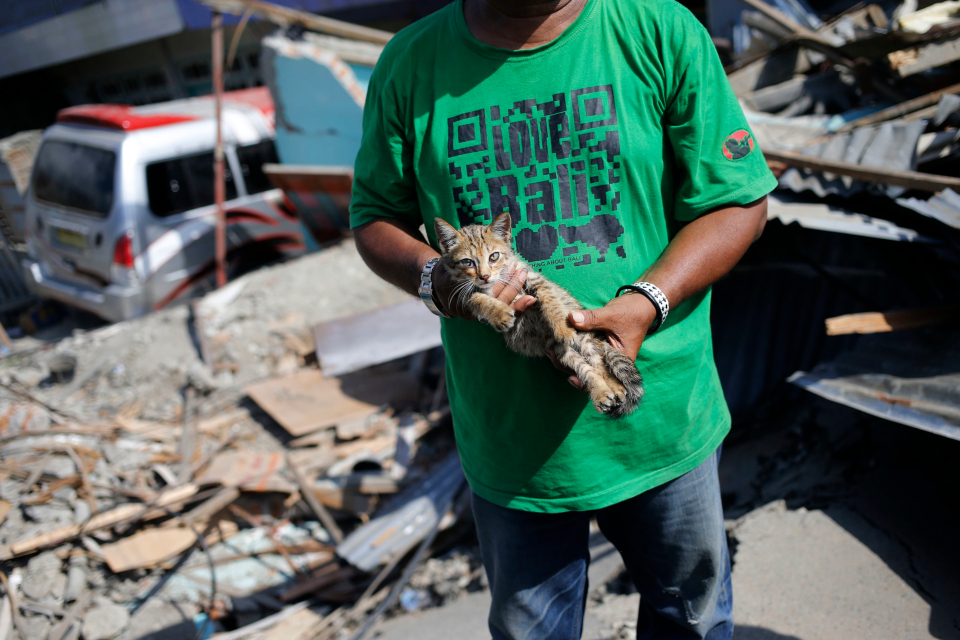 Trucks carrying food for desperate survivors of the earthquake on Indonesia's Sulawesi island rolled in with a police escort Tuesday to guard against looters, while the death toll from the disaster soared past 1,200.

Four days after the magnitude 7.5 earthquake and tsunami struck, supplies of food, water, fuel and medicine had yet to reach the hardest-hit areas outside Palu, the largest city that was heavily damaged. Many roads in the earthquake zone are blocked and communications lines are down.

"We feel like we are stepchildren here because all the help is going to Palu," said Mohamad Taufik, 38, from the town of Donggala, where five of his relatives are still missing. "There are many young children here who are hungry and sick, but there is no milk or medicine."

The death toll reached 1,234, national disaster agency spokesman Sutopo Purwo Nugroho said in Jakarta, the capital. Hundreds of other people were injured, and scores of uncounted bodies could still be buried in collapsed buildings in Sigi and Balaroa under quicksand-like mud caused by Friday's quake.

More than 25 countries have offered assistance after Indonesian President Joko "Jokowi" Widodo appealed for international help. Little of that, however, has reached the disaster zone, and increasingly desperate residents grabbed food and fuel from damaged stores and begged for help.

An aircraft carrying 12,000 liters (3,170 gallons) of fuel had arrived. and trucks with food were on the way with police escorts to guard against looters. Many gas stations were inoperable either because of quake damage or from people stealing fuel, Nugroho said.The frustration of waiting for days without help has angered some survivors.

The town's administrative head, Kasman Lassa, all but gave residents permission to take food — but nothing else — from stores.

"Everyone is hungry and they want to eat after several days of not eating," Lassa said on local TV.

"We have anticipated it by providing food, rice, but it was not enough. There are many people here. So, on this issue, we cannot pressure them to hold much longer."

Nearly 62,000 people have been displaced from their homes, Nugroho said.

Most of the attention has been focused so far on Palu, which has 380,000 people and is easier to reach than other hard-hit areas.

More aid was being distributed, but "we still need more time to take care of all the problems," Nugroho said.

Teams continued searching for survivors under destroyed homes and buildings, including a collapsed eight-story hotel in Palu, but they needed more heavy equipment to clear the rubble.

Many people were believed trapped under shattered houses in the Palu neighborhood of Balaroa, where the earthquake caused the ground to heave up and down violently.

"I and about 50 other people in Balaroa were able to save ourselves by riding on a mound of soil which was getting higher and higher," resident Siti Hajat told MetroTV, adding that her house was destroyed.

A handful of disaster personnel arrived in the neighborhood Tuesday morning. A lone backhoe cleared a path into the jumble of twisted buildings.

Sa'Adon Lawira, who lost a grandchild, was angry that rescue efforts focused so quickly on places such as the Palu hotel where tourists were staying.

"Why did the search-and-rescue agency and others prioritize the search for victims in hotels?" he said, holding back tears as he spoke.

"Neighborhoods like this should take precedence because the bodies of residents are buried, but there are no rescuers who have searched for them."

Near the coast, the tsunami shattered buildings, uprooted concrete and thrust boats inland. The deadly wave reportedly reached as high as 6 meters (nearly 20 feet) in places.

In Palu's Petobo neighborhood, the quake caused loose, wet soil to liquefy, creating a thick, heavy quicksand-type material that resulted in massive damage. Hundreds of victims are still believed to be buried in the mud there.Liquefaction of soil can be compared to walking on a sandy beach.

"If you walk across some wet sand a little back from the water's edge, it is usually firm walking, even though you might leave footprints," said Adam Switzer, an expert at the Earth Observatory of Singapore. "However, if you stand still and wiggle your toes and feet, you will probably sink a little as the sand around your feet becomes soft and unstable. This is similar to what happens during liquefaction."

Nugroho said 153 bodies were buried Monday in a mass grave in Palu and that the operation continued Tuesday.

He said generators, heavy equipment and tents are among the most-needed aid items.

The countries that offered assistance include the United States and China, he said.Australian Prime Minister Scott Morrison said his government has given $360,000 to help victims and is in talks with Indonesian authorities about a second round of aid. The initial funds are to go to the Indonesian Red Cross for the most obvious emergency aid needs, such as tarpaulins.

Nugroho said only two of the 122 foreigners in the area remained unaccounted for — one from South Korea and the other from Belgium.

Indonesia, a vast archipelago of 260 million people, is frequently struck by earthquakes, volcanic eruptions and tsunamis because of its location on the "Ring of Fire," an arc of volcanoes and fault lines in the Pacific Basin. A powerful quake on the island of Lombok killed 505 people in August, and two moderate quakes near an eastern island on Tuesday reportedly damaged a bridge.