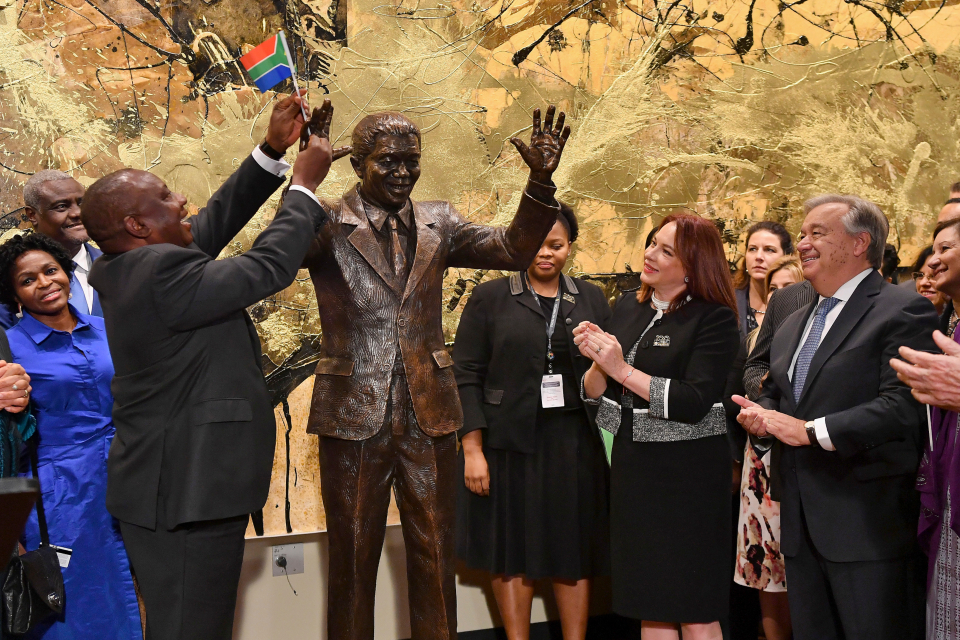 Nelson Mandela's widow challenged world leaders celebrating his life on Monday to put their egos and partisan politics aside and honor his legacy by ending the "senseless violence" plaguing too much of the world.

"History will judge you should you stagnate too long in inaction," Graca Machel told a U.N. "peace summit" commemorating the 100th anniversary of Mandela's birth. "Humankind will hold you accountable should you allow suffering to continue on your watch."

With peace a scarce commodity, Machel's challenge was echoed by U.N. Secretary-General Antonio Guterres and other leaders who acknowledged the world is far from achieving Mandela's ideals which also include human rights and global cooperation.

"Today, with human rights under growing pressure around the world, we would be well served by reflecting on the example of this outstanding man," Guterres said.

"We need to face the forces that threaten us with the wisdom, courage and fortitude that Nelson Mandela embodied."

The tributes to Mandela began with a rare U.N. honor — the unveiling of a $1.8 million statue of the South African anti-apartheid campaigner who became the world's most famous political prisoner, played a key role in ending white-minority rule, and became president in the country's first democratic election. The statue is a gift to the United Nations from South Africa.

His arms are outstretched in the statue, as if to embrace people everywhere. But after the cover was pulled off, South African President Cyril Ramaphosa, with help from Guterres, placed a small South African flag in his lapel.

The day-long summit, with nearly 160 scheduled speakers, set the stage for Tuesday's opening of the General Assembly's annual meeting of world leaders, where conflicts from Syria to South Sudan, rising unilateralism, and tackling a warming planet and growing inequality are among issues expected to be in the spotlight.

With a bang of the gavel by General Assembly President Maria Fernanda Espinosa Garces, the leaders on Monday adopted a political declaration resolving "to move beyond words" to promote peace and prevent, contain and end conflicts. "Dialogue is key, and courage is needed to take the first steps to build trust and gain momentum," it said.

Garces said Mandela "represents a light of hope for a world still torn apart by conflicts and suffering."

Like others, she warned of the rise of populism and unilateralism and its threat to the 193-member United Nations.

"Drifting away from multilateralism means jeopardizing the future of our species and our planet," Garces said.

"The world needs a social contract based on shared responsibility, and the only forum that we have to achieve this global compact is the United Nations."

The appeal for collective action to tackle the world's many conflicts, hotspots and challenges is being tested by the "America First" agenda of U.S. President Donald Trump and populist governments in Italy, Hungary, Austria and elsewhere as well as Britain's impending divorce from the European Union.

But Rouhani appeared to be taking aim at Trump and his pledge to build a wall on the U.S.-Mexican border when he said Mandela was a model for the "historical reality that great statesmen tend to build bridges instead of walls."

Alluding to the Trump administration, Cuba's President Miguel Diaz-Canel Bermudez said recent announcements about military expenditures are "alarming" and are pushing the world into a new arms race "to the detriment of the enormous resources that are needed to build a world of peace."

South Africa's Ramaphosa said his country's "deepest hope" is that the summit, "in the name of one of our greatest exemplars of humanity, serves as a new dawn for the United Nations."

"We hope we will rediscover the strength of will to save successive generations from war, and to overcome the hatred of our past and the narrow interests that blind us to the vision of a common future that is peaceful and prosperous," he said. "We hope we will prove ourselves worthy as the bearers of the legacy of Nelson Mandela."