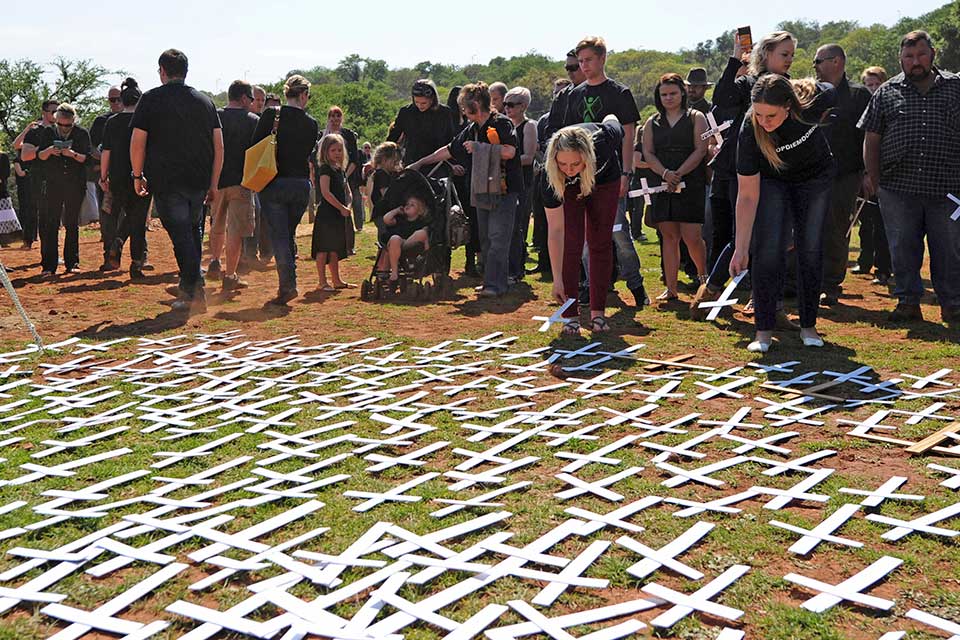 JOHANNESBURG (AP) — South Africa's government lashed out at President Donald Trump on Thursday after he tweeted that his administration would be looking into farm seizures and the "large scale killing of farmers" in the country.

The government said Trump's tweet was based on "false information" and reflected a "narrow perception which only seeks to divide our nation and reminds us of our colonial past." It was meeting with the U.S. Embassy as it sought to clarify Trump's remarks.

I have asked Secretary of State @SecPompeo to closely study the South Africa land and farm seizures and expropriations and the large scale killing of farmers. “South African Government is now seizing land from white farmers.” @TuckerCarlson @FoxNews

South Africa is in the throes of a racially charged national debate over land reform, a lawful process that seeks to correct the legacy of decades of white minority rule that stripped blacks of their land.

Today, nearly a quarter-century after the first democratic elections, black South Africans comprise 80 percent of the population but own just 4 percent of the country's land, according to the government.

Though the ruling African National Congress, which has been in power since 1994, has pledged to close that gap, progress has been slow. In July, President Cyril Ramaphosa said his party would amend the constitution so the state could expropriate land without compensation to speed up the land reform process. Debate over the issue has grown ahead of next year's election.

Trump's tweet followed a segment on Fox News on Wednesday in which host Tucker Carlson claimed Ramaphosa had already started "seizing land from his own citizens without compensation because they are the wrong skin color," calling the alleged seizures "immoral."

Though South Africa's constitution has not yet been amended and the government has not seized any major agricultural land, the prospect has sent panic through some white farming communities who worry the policy will strip them of their land, cause land prices to plummet or make them the target of potentially violent land seizures.

For years, a small but vocal group of white South Africans have claimed white farmers are the target of violent, racially motivated farm attacks.

Experts say the attacks reflect the country's generally high crime rate and that there is no evidence connecting them to victims' race.

Farm murders have been declining since their peak in 2001, according to research by Agri SA, an umbrella group of South African agricultural associations. In 2016-17, there were 74 murders during farm attacks, according to Africa Check , compared to 19,000 murders across the country in the same period.

"People are not being targeted because of their race, but because they are vulnerable and isolated on the farms," said Gareth Newham, head of the crime and justice program at the Institute for Security Studies in the capital, Pretoria.

"There is no white genocide in South Africa," Julius Malema, leader of the opposition Economic Freedom Fighters party, told reporters.

"There is black genocide in the USA; black people are killed every day.

"There is a black genocide here in South Africa; just recently a farmer was convicted for the murder of a black farmer."

AfriForum, a group that represents some white South African interests, welcomed his comments. In May, its leaders went to the U.S. to lobby institutions and politicians about Ramaphosa's proposal to expropriate land and the alleged targeting of white farmers.

Earlier this month the group posted a list of farms it said were earmarked for expropriation, a list that the government said was fake.

"Everyone in South Africa should hope that the pressure from the USA will lead to the (ruling party) reconsidering the disastrous route that they want to take South Africa on," AfriForum's CEO Kallie Kriel said in a statement on Thursday.

AfriForum and other critics say the government's proposal to expropriate land without compensation could lead to economic disaster, pointing to the collapse of the agricultural sector in neighboring Zimbabwe after the government of former President Robert Mugabe began seizing white-owned farms, sometimes violently, in 2000.

"We are going to take back the land and we'll do it by any means necessary," said Lindsay Maasdorp, national spokesman for Black First Land First, a group that condones land seizures in South Africa.

Proponents of South Africa's policy, including Ramaphosa, say it is necessary to address historic injustices and can be done in a way that is lawful and will not compromise the beleaguered economy or food security.

"It is absolutely unbelievable that a head of state at that level can be so disrespectful to issues of dispossession that South Africa is painfully trying to address in a democratic way," Vuyo Mahlati, president of the African Farmers' Association of South Africa, said of Trump.

In parliament on Wednesday, Ramaphosa said land expropriation could make more land available for cultivation, and that the process would begin by seizing state-owned land, not privately held land.

"This is our South Africa, this is our land, this is where we live," Rural Development and Land Reform Minister Maite Nkoana-Mashabane told South Africa's public broadcaster SABC.

Trump has never experienced apartheid and doesn't know its legacy of inequality in which the majority of South Africans own nothing, Zizi Kodwa, a member of the ruling party's national executive committee, told The Associated Press.

"He is part of the right-wing lynch mob using the fear factor in order for us to maintain the status quo," Kodwa said. "Donald Trump is a weapon of mass destruction."