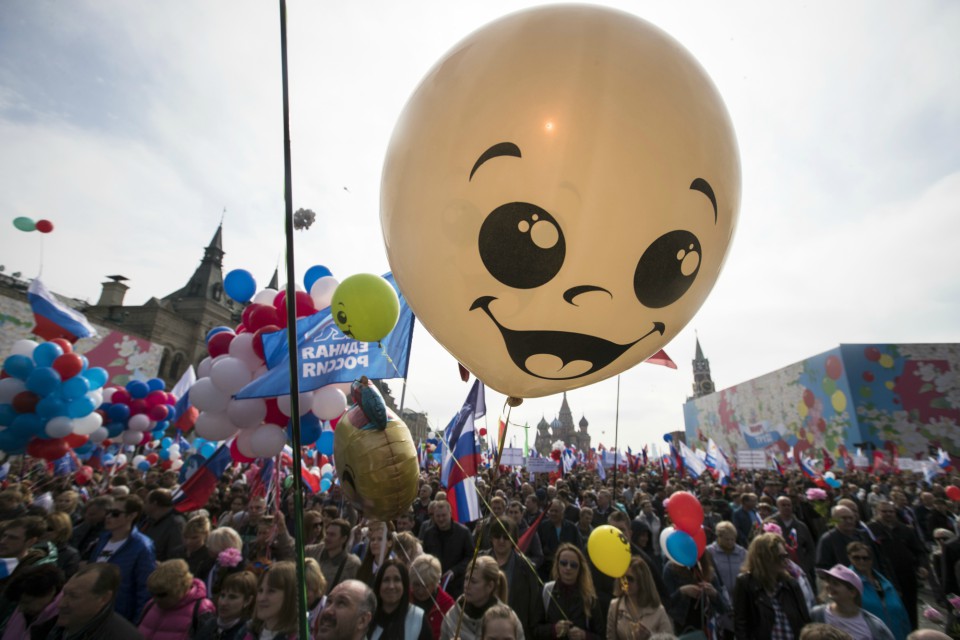 International Workers' Day is a public holiday in many countries, though activities are restricted in some places, sometimes leading to confrontations.

Here’s a look at some of the events around the world:

More than 100,000 people came out on the streets on Moscow to march in the traditional May Day parade.

Moscow's Federation of Trade Unions said about 120,000 people marched from the Red Square on the main streets of the Russian capital to mark May Day.

Over recent years, the parade became a highly orchestrated show of power by Russian authorities and the ruling United Russia party, with the demonstrators refraining from criticizing the government.

In St. Petersburg, Russia's second-largest city, however, Russians unhappy with the Kremlin's attempts to curtail internet freedom joined the official May Day demonstration.

About 10,000 people rallied in Moscow on Monday to protest the blocking of Telegram.

Police detained dozens of demonstrators during May Day events around Istanbul, most of them protesters who tried to march toward the city's symbolic main square in defiance of a ban.

Still, small groups of demonstrators, chanting "Long live May 1" and "Taksim cannot be off limits on May 1" tried to push their way into the square throughout the day, leading to scuffles with police. At least 45 demonstrators were detained.

Major trade unions gathered at a government-designated area in Istanbul for a large rally. At least six people were detained following scuffles with police at a security checkpoint leading to the rally ground.

Taksim holds a symbolic value for Turkey's labor movement. In 1977, 34 people were killed there during a May Day event when shots were fired into the crowd from a nearby building.

Scattered vandalism marked May Day in France as hundreds of demonstrators marched across Paris to oppose economic policies pursued by President Emmanuel Macron.

Some participants smashed the windows of a McDonald's restaurant and set furniture inside on fire as the demonstration in the French capital heated up. Protesters also wore masks and threw firecrackers.

Television cameras captured vandals overturning a car on Tuesday afternoon and setting it on fire.

During the march, workers and students waved anti-capitalist flags and brandished banners with phrases such as "Risks to Disrupting the Peace," ''Let's Derail the Government" and "Macron Gives Us a Dark Hatred."

Organizers hope nationwide May Day protests will send a robust riposte to the centrist Macron's plans to end some worker protections.

Thousands of Greeks are marching through central Athens in at least three separate May Day demonstrations.

Museums were also shut while ferries remain were tied up in port and public transport operated on a reduced schedule in strikes marking labor day.

Police said at least 7,000 people were at the first demonstration in Athens, which was organized by a communist party-led union. The protesters marched by parliament and headed up a major avenue to the United States Embassy.

Another four demonstrations were planned in Greece's second largest city of Thessaloniki in the north.

Trains, the suburban railway, urban trolleys and ferries to and from the islands suspended operations for the day, while buses and the Athens metro system were operating on reduced schedules.

Tens of thousands of workers marched across Germany and Austria rallying for their rights in the face of globalization.

In Vienna, some 12,000 people gathered in front of city hall, some carrying banners with slogans against planned welfare cuts by the new government.

Meanwhile, around 4,000 union supporters marched on different routes through Berlin, before assembling at the German capital's landmark Brandenburg Gate.

"We have more rich and even richer people than we ever had before," said protester Aimo Tuegel in Berlin. "And, on the other hand, work and working conditions for workers continuing to get worse."

In Nuremberg, where the German Confederation of Trade Unions, or DGB, held its main event this year, some 6,500 protesters cheered as the group's leader, Reiner Hoffmann, said the unions "managed to civilize industrial capitalism some 100 years ago" and would also be able to tackle contemporary challenges like digitalization.

The DGB said that altogether some 340,000 people participated in almost 500 May Day events across Germany.

Danish labor union officials and left-leaning lawmakers started the day with traditional addresses to employees at work places throughout the Scandinavian country. Later in the day, thousands gathered in large parks around the country, despite rain, chilly temperatures and winds, to listen to May Day speeches that often criticized the center-right government.

While May Day was mainly a left-leaning event in Denmark, the right and the left flanks held speeches in Sweden and Norway.

In Norway, Sylvi Listhaug, a former justice minister until she resigned in March for writing a Facebook post claiming the opposition Labor Party was more interested in protecting the rights of terrorists than the Norwegian people, lashed out at its leader Jonas Gahr Store who heads Norway's largest party, for not being folksy, and warned against a weak immigration line.

More than 70 cities across Spain have held May Day marches calling for gender equality, higher salaries and pensions now that the country's economy is back on track.

The demonstration in Madrid was among the biggest, with thousands rallying behind the slogan "Time to win."

CCOO union official Unai Sordo says that "a social majority is emerging from the psychosis of the (global financial) crisis" in 2008 that hit Spain hard.

Pepe Alvarez, the secretary general of UGT, the other main union in Spain, said that meeting the demands of feminists, youths and pensioners are necessary to "redistribute wealth" in the country.

Spain's economy, the fourth-largest in the 19-country eurozone, has in recent years posted some of the fastest economic growth in Europe.

Hundreds of trade union members gathered outside the Macedonian government building in the capital on May Day to protest poor labor conditions and to call for the protection of workers' rights.

The National Federation of Trade Unions led Tuesday's protest march from downtown Skopje to the government building, seeking legal changes that would protect workers and improve collective wage agreements in both the private and public sectors.

"We have received many promises, but the situation has not improved at all," union head Tamara Chausidis said.

Sri Lanka's government has postponed the rallies and processions that mark May Day because the weeklong celebrations of the national festival of Vesak carry on until May 2 this year.

The government said in a statement that the decision was taken following requests by leading Buddhist monks, who are very influential in this majority Buddhist country. Vesak is also known as Buddha Purnima and marks the enlightenment of Lord Buddha.

The government has asked political parties and trade unions not to hold rallies on May 1. Some have said they will ignore the government directive and mark the day.

The government said it will mark International Workers' Day on May 7.

About 5,000 people from various groups rallied near the presidential palace in Manila to protest the failure of Philippine President Rodrigo Duterte to fulfill a major campaign promise to end contractualization, the widespread practice of short-term employment.

Thousands of labor union members rallied in downtown Seoul for a higher minimum wage and other demands.

They chanted slogans urging the government to implement a 10,000 won ($9.34) minimum wage and convert all non-regular employees to regular workers with equal pay and treatment.

The rally was organized by the Korean Confederation of Trade Unions. The police estimated the crowd at 10,000 people.

The union members also demanded that the government scrap the restructuring of the shipbuilding and automobile industries, and reform the huge conglomerates that dominate the South Korean economy.

About 10,000 workers from various labor groups rallied near the presidential palace in Jakarta to voice their demands.

Most of the workers came from Jakarta and nearby suburbs, but some traveled from West Java and Surabaya.

About 2,000 garment workers gathered at a park in Cambodia's capital, Phnom Penh, for a rally organized by a garment union coalition.

The workers wanted to march to the National Assembly to urge lawmakers to help them address labor-related concerns, but the group was stopped by riot police.

Prime Minister Hun Sun spent May Day with some 5,000 garment workers just outside Phnom Penh. He thanked the workers by announcing that each of them will receive 50,000 riel ($12.50). With a general election coming up in July, Hun Sen for the past year has been courting the large bloc of garment workers, whose unions traditionally have been strong supporters of the opposition.