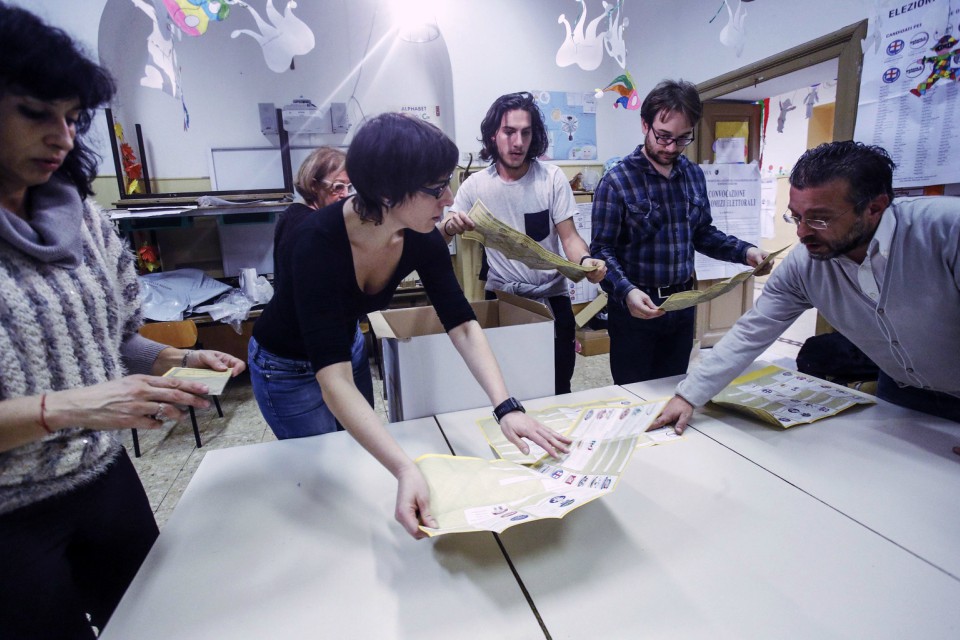 ROME (AP) — Italy's voters have spoken, and the populists ruled the day. But whether these euroskeptics can put aside their distrust and rivalries to rule together was the big question Monday as the nation embarked on a new era following a quarter-century of largely predictable coalition-formula politics.

More than half the ballots cast Sunday went to two populist forces that knew how to read the angry mood in a country where the brightest youths must go abroad to find decent careers and where hundreds of thousands of migrants were essentially marooned when many European Union partners slammed the door on these asylum-seekers rescued at sea.

The math added up to big dilemma, though. Because no party or coalition captured enough seats to rule alone, and because the populists went into the election as sharp rivals despite their similar "Italy, first," stances, it was unclear if a government with the potential to last could be forged to tackle Italy's pressing economic and social problems.

No one seemed to have the answer Monday.

"The (next) government is an enigma," read the front-page headline of the daily Corriere della Sera.

Emerging on top — and the pick of nearly a third of those who cast ballots — was the anti-establishment 5-Star Movement, founded in 2009 by comic Beppe Grillo and the largest opposition force in the just-ended legislature.

The other main player in maneuvers to try to form a government is the anti-immigrant League, led by Matteo Salvini, which expanded beyond its northern base to outpoll the conservative Forza Italia, the party created in the mid-1990s by Silvio Berlusconi.

"March 4's vote represents a watershed, with the maximum affirmation of anti-establishment parties in the Western Europe panorama, from the post war to today," said Rome's LUISS university's center for Italian electoral studies.

For roughly a quarter-century following the political upheaval in Europe set in motion by the demise of Eastern bloc communism, Italy's elections had largely alternated power between a center-right coalition headed by Berlusconi, who served three terms as premier, and a center-left bloc built around the Democratic Party, many of them former communists.

That system had been dubbed the "second republic." It followed the so-called "first republic" of the post-war generation, in which Christian Democrats anchored government after short-lived coalitions, cobbled together with the aim of keeping what was then Western Europe's largest communist party out of power. That system crumbled in the early 1990s amid corruption scandals that swept away virtually an entire political class.

"Today for us is the start of the third republic. And the third will finally be the republic of the citizens," exulted Luigi Di Maio, the 5-Star Movement's 31-year-old candidate for premier.

But how that new era will take shape is very unclear.

Berlusconi, sidelined from holding office due to a tax fraud conviction and relishing the prospect of playing kingmaker after Sunday's vote, suffered what could be a definitive blow for the 81-year-old media mogul.

Berlusconi's Forza Italia captured only 14 percent of the vote, compared to 18 percent for coalition partner Salvini's League, which achieved virtual dominance in Italy's prosperous northern regions, where Berlusconi made much of his immense wealth.

The League's votes, along with Forza Italia and those of a smaller partner, the far-right Brothers of Italy, totaled 37 percent of ballots cast — nowhere near the absolute majority needed to win the confidence votes in each chamber of Parliament required under Italy's system for governing.

The 5-Stars Movement's better-than-expected 32 percent showing was boosted by its dominance of the south, where Forza Italia had long held sway.

This north-south divide is a new element that could complicate any power-sharing, political analyst Angelo Panebianco said.

"Government formation will take longer because of this division" as leaders adjust to new territorial equilibriums, he said on Sky TG24.

Further complicating the path toward a new government are campaign vows by the 5-Stars Movement never to govern in a coalition.

Savoring the center-right's performance, Salvini vowed that the bloc had won "the right and the duty to govern." Berlusconi and Salvini huddled on Monday at the mogul's estate on Milan's outskirts, but there were no indications what strategy the two leaders might chart.

"I am and I will remain a populist," Salvini told reporters. He sought to assure financial markets that his leadership wouldn't be anything to fear, even as he reaffirmed his belief that Italy's membership in the euro common currency was a mistake.

Asked about the possibility of joining forces with the 5-Stars Movement to govern, Salvini replied: "No, no, no."

For its part, the 5-Stars Movement has insisted it would never dirty itself by joining a government alliance. But as the first results were trickling in early Monday, 5-Stars leaders started sending another message, saying they expected Italy's parties will have to come to them to work out a deal for government.

Shaping up to be the largest opposition party in Parliament was the Democrats of former Premier Matteo Renzi, which had been the main coalition partner in government since 2013. Splintered and squabbling under what was seen by critics as a heavy-handed leadership, the Democratic Party plunged to 23 percent.

Renzi vowed to stay on as party leader until a new government is formed to ensure the Democrats don't lend support to any "extremist" force. He described both the League and the 5-Stars as embodying an anti-Europe spirit he couldn't embrace. He also noted that during the campaign both Salvini and Di Maio had branded Democratic lawmakers as Mafiosi and corrupt.

"If that's who we are, govern without us," Renzi said, declaring that his party's place in the new legislature was in the opposition.

The virulently anti-immigrant League's big jump in popularity came through a remarkable transformation. For this election, Salvini shed the name "Northern" from the party's label, seeking to expand influence beyond its geographic stronghold. In the south, where it made virtually no impact at all in the 2013 election, it polled 6.7 percent, a respectable showing he can use to strengthen his hand in maneuvering to create a government.

Salvini also cozied up with like-minded Europeans. He met privately with Russian leader Vladimir Putin in 2014 in Milan, has aligned himself with France's populist leader Marine Le Pen and praised Hungary's leader Viktor Orban, who similarly took a hard stand on migrants.