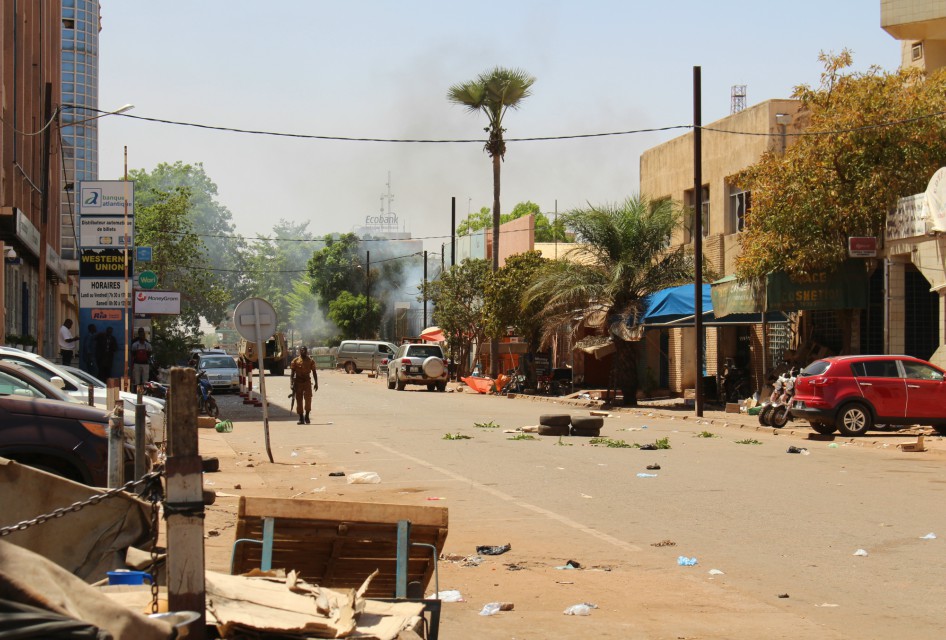 More than 90 people were wounded in the violence in the former French colony in West Africa, and officials called it a terrorist attack. There was no claim of responsibility.

Five emergency centers were set up in hospitals, a military barracks and at a stadium in Ouagadougou to treat the casualties, said Col. Amade Kafando, director general of Burkina Faso's army health department. There were fears that the death toll could rise.

Gunfire and explosions resounded for hours but subsided by midday. Workers fled offices near the site of the violence, and helicopters were seen above the embassy.

Witnesses at state TV offices that face the embassy told The Associated Press that five attackers arrived in a pickup truck, shouted, "Allahu Akhbar," and began shooting. They also set fire to the truck, the witnesses added.

The neighborhood also houses other embassies, the prime minister's office and U.N. offices. The French Foreign Ministry later said the situation near the embassy had stabilized.

Across central Ouagadougou to the west, heavy smoke rose from the army joint chief of staff's office, where witnesses reported loud explosions. Windows were broken there and in the surrounding buildings.

The assailants there also arrived in a pickup and starting shooting at soldiers, said Moussa Korbeogo, a trader at a nearby market.

"Some of the soldiers ran into a nearby bank to seek shelter. Several were killed outside and inside the premises," Korbeogo said.

Five of the extremists were killed at the embassy and at least three were killed near the army headquarters, according to Communications Minister Remy Danguinou.

The Paris prosecutor's office said it has opened a preliminary attempted murder investigation into the attack because the embassy was among the targets, a judicial official said on condition of anonymity because he is not authorized to talk to the media identified.

It was not clear how many militants took part in what Jean Bosco Kienou, director general of Burkina Faso's police, and French Prime Minister Edouard Philippe called a terrorist attack.

French Foreign Minister Jean-Yves Le Drian said in a statement that Burkina Faso's security forces had received the support of the French to "reduce the threat." He said the safety of French citizens in Ouagadougou "is my priority."

The ministry's website recommended that people stay off the streets and remain in a safe place.

The landlocked nation of Burkina Faso is one of the poorest countries in the world. It shares a northern border with Mali, which has long battled Islamic extremists.

Ouagadougou has been attacked by Islamic extremists targeting foreigners at least twice in the past few years.

Al-Qaida in the Islamic Maghreb claimed responsibility for the 2016 killings along with the jihadist group known as Al Mourabitoun. But the terror threat in Burkina Faso is increasingly homegrown, experts say.

The northern border region near Mali is the home of a local preacher, Ibrahim Malam Dicko, who has claimed responsibility for recent deadly attacks on troops and civilians. His association, Ansarul Islam, is considered a terrorist group by Burkina Faso's government.

Among his objectives has been ending the use of French, the former colonizer's language, in regional schools. Forces backed by the French military have failed to capture Dicko.

But he is not the only threat. Northern areas near the border with Mali have been a regular target of attacks by various extremist groups, some of them vowing to step up deadly assaults in response to the recent deployment of a regional G5 Sahel force. The 5,000-member force combines troops from Burkina Faso, Mali, Niger, Chad and Mauritania, with France leading the efforts to bring in international funding.

The countries' troops join forces where they can. In response to the new violence in eastern Burkina Faso, troops from Burkina Faso and nearby Mali and Niger have increased patrols. Extremists are thought to be hiding in forested areas in the border region.

Longtime President Blaise Compaore was ousted in a popular uprising in late 2014, and a coup was mounted the following year but ultimately failed. Some critics say the military has suffered during the years of political upheaval.

During the 2016 assault, security forces waited for hours before trying to intervene.

Threats by Islamic extremists also moved into new parts of Burkina Faso in February with an attack by 10 people in an eastern town that killed an officer and wounded two others.

Increased attacks at the border with Mali have forced thousands to flee in the past year. An Australian doctor who had spent decades treating civilians was also abducted along this border and remains missing.