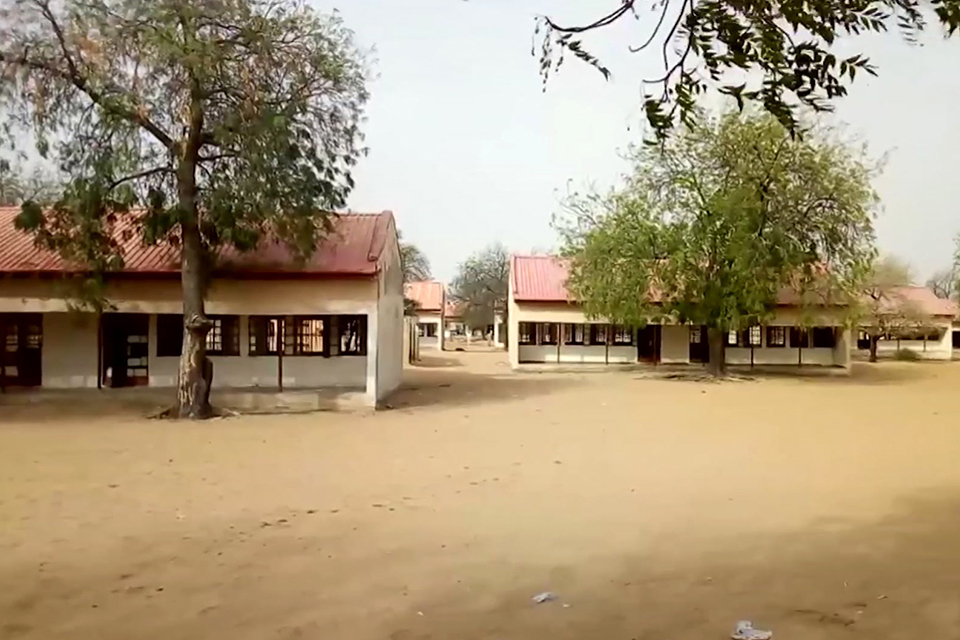 LAGOS, Nigeria (AP) — Frightened students on Monday stayed away from the school in northern Nigeria where Boko Haram extremists seized 110 girls in a raid a week ago, while the military said it had handed over the town's security to police ahead of the attack because it was "relatively calm."
The mass abduction from the Government Girls Science and Technical College in Dapchi has reminded many of Boko Haram's kidnapping of 276 girls from a boarding school in Chibok in 2014.
Anger has been growing as the government struggles to respond to the latest attack. Teachers resumed classes a day after Nigeria's government for the first time acknowledged the number of girls missing, but students were absent.
"They are too frightened to go there. We parents are equally frightened to see our daughters go there," said Mohammed Mele, who has two children in the school. "Many other parents are not likely to send their children back," another parent, Mohammed Ibrahim, told The Associated Press.
The school will reopen when "frayed nerves cool down," Yobe state education commissioner Mohammed Lamin said.
The fate of the 110 girls is not known, but witnesses have said the Islamic extremists specifically asked where the girls' school was located. Some witnesses reported seeing young women taken away at gunpoint. Information Minister Lai Mohammed said 906 students were in the school at the time.
The military rejected reports that its recent withdrawal from Dapchi caused the Boko Haram attack, but in a statement it confirmed having handed over security of the town to local police "on the premise that Dapchi has been relatively calm and peaceful." The military has not said when that handover occurred.
The Bring Back Our Girls movement that brought the Chibok mass abduction to world attention has embraced the cause of the Dapchi families, though with some astonishment that the tragedy has happened again. As the fourth anniversary of the Chibok kidnappings approaches, the movement says 112 of those schoolgirls are yet to be found.
"It is terribly EXHAUSTING but WE SHALL STAND. WE SHALL," one of the movement's organizers, Oby Ezekewsili, said on Twitter of the Dapchi attack.
The latest mass abduction is a major challenge for President Muhammadu Buhari, who has called the Dapchi kidnappings a "national disaster" and vowed that no effort will be spared to locate the girls.
Buhari won elections in 2015 while making the fight against Boko Haram a priority. His government has repeatedly claimed that the extremist group has been defeated, but it continues to carry out deadly suicide bombings in the north, often using women and children who have been kidnapped and indoctrinated.
In a reminder that some of those kidnapped have been freed, Buhari on Monday met with three University of Maiduguri lecturers and 10 police officers who were seized in June by Boko Haram extremists and recently released.
"The government remains unrelenting towards rescuing all those abducted," the president said, adding that he has ordered all security agencies to "immediately ensure that every effort is directed to ensure the safety of our schools and students."
Many fear the girls seized last week were abducted to become brides for Boko Haram extremists. Some of the schoolgirls taken in the Chibok mass abduction were forced to marry their captors. About 100 of the Chibok girls have never returned to their families.
Nigeria faces another presidential election next year.
___
Associated Press writer Ibrahim Abdul'Aziz in Yola, Nigeria contributed.
___
Follow Africa news at https://twitter.com/AP_Africa