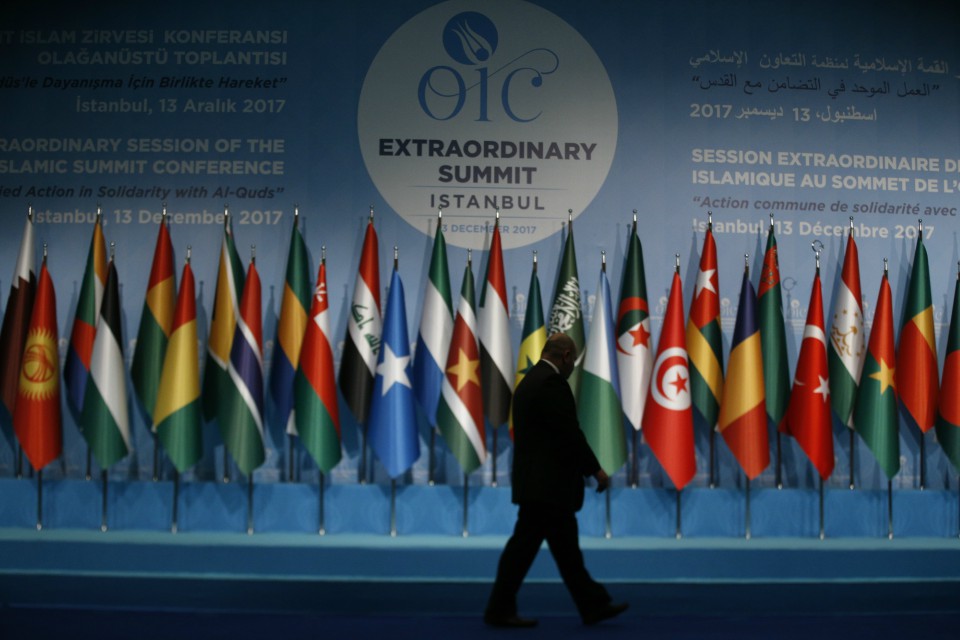 He announced the shift, which came in response to President Donald Trump's declaration of Jerusalem as Israel's capital, at a summit of Muslim leaders that condemned the U.S. move and called for world recognition of a Palestinian state with its capital in east Jerusalem.

Abbas said Trump's decision was a "crime," which came at a time when the Palestinians were engaged with Washington in a new push to reach a long-elusive peace agreement with Israel, the "deal of our times."

"Instead we got the slap of our times," Abbas said. "The United States has chosen to lose its qualification as a mediator ... We will no longer accept that it has a role in the political process." He suggested the U.N. should take over as mediator.

The summit of the 57-member Organization of Muslim Cooperation concluded with the so-called Istanbul Declaration, outlining the bloc's response to Trump's declaration. It called the decision "null and void" and urged Trump to reconsider the move, which it said was an "unlawful decision that might trigger chaos in the region."

Turkish President Recep Tayyip Erdogan, who hosted the summit, said it is "out of the question" for Washington to continue mediating between Israel and the Palestinians. "That process is now over," he said. An earlier draft communique had similarly declared the U.S. role over, but it was not clear if that language was ultimately adopted by the attendees.

Erdogan said OIC members should look for a new mediator and consider taking the matter to the U.N. In earlier remarks to the summit, he called Israel a "terror state."

Jerusalem's status is at the core of the decades-long Israeli-Palestinian conflict and Trump's Dec. 6 announcement was widely perceived as siding with Israel. It also raised fears of more bloodshed as past crises over Jerusalem have triggered violence.

Abbas said the Palestinians remain committed to international resolutions, which have formed the basis of the peace process, urging Muslim nations and countries with relations with Israel to take measures "to force it to abide by international consensus" to end its occupation of Palestinian territories, including east Jerusalem.

Last week, Abbas' aides said the Palestinian leader would not meet with Mike Pence during the U.S. vice president's planned visit to Israel and the West Bank next week. Abbas had initially planned to meet with Pence in the biblical West Bank town of Bethlehem, but two senior aides have said the meeting would not take place because of Trump's pivot on Jerusalem.

King Abdullah II of Jordan told the gathering that Trump's "grave" decision threatened the resumption of any peace talks.

Most countries around the world have not recognized Israel's 1967 annexation of east Jerusalem. Under a long-standing international consensus, the fate of the city is to be determined in negotiations.

Saudi Arabia did not participate in a high-level capacity. But in Riyadh, King Salman and his powerful son and heir, Crown Prince Mohammed bin Salman, met Wednesday with Abu Dhabi Crown Prince Mohammed bin Zayed Al Nahyan, who also leads the United Arab Emirates' armed forces. A statement said they discussed "the serious repercussions of the negative decision of the U.S. to recognize Jerusalem as the capital of Israel."

In an emergency meeting in Cairo last weekend, Arab League foreign ministers demanded that the U.S. rescind Trump's decision. In a resolution long on rhetoric but short on concrete actions, the ministers also called for the U.N. Security Council to adopt a resolution condemning Trump's decision, but acknowledged that Washington would most likely veto it.

Israel has considered Jerusalem its capital since the state's establishment in 1948 and sees the city as the ancient capital of the Jewish people. In the 1967 Mideast war, Israel captured the city's eastern sector and later annexed it in a move that is not recognized internationally.

The Old City, located in east Jerusalem, is home to sites holy to Jews, Christians and Muslims. These include the Western Wall, the holiest site where Jews can pray, and the Al-Aqsa Mosque, Islam's third holiest site.