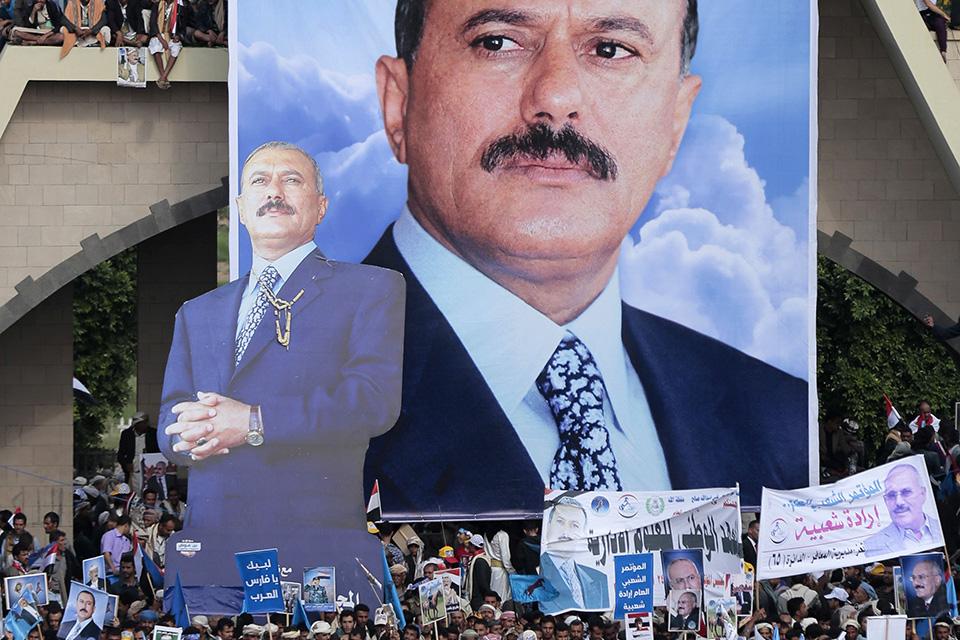 SANAA, Yemen (AP) — The Latest on the conflict in Yemen (all times local):

Yemen's President Abed Rabbo Mansour Hadi has urged Yemenis to unite against the country's Shiite Houthi rebels, describing them as "Iranian militias" and a "nightmare."

Hadi, who has been self-imposed exile in Riyadh in recent past years, delivered his televised speech hours after the Houthis killed their onetime ally, former president Ali Abdullah Saleh.

Saleh's forces and Houthis joined ranks in 2014 against Hadi's government, forcing him to seek military intervention by his Gulf neighbors. When the Saleh-Houthi alliance began to unravel, Hadi offered the opportunity of a fresh start in relations with Saleh, days before his death.

"Yemen is passing through a decisive turning point that needs our unity and steadfastness in the face of these sectarian militias," Hadi said, referring to the Houthis.

He offered condolences for the death of Saleh, describing him and others who were killed in the past days of clashes as "martyrs."

"Let's put our hands together to end this nightmare," said Hadi, who succeeded Saleh in 2012. He added that government forces would support an "uprising" against the Houthis in Sanaa.

Germany's foreign minister says that the situation in Yemen is "probably the worst humanitarian catastrophe right now worldwide," worse than the Rohingya Muslim refugees in Bangladesh whose plight has captured global attention.

Sigmar Gabriel said after a Monday meeting in Paris with his French counterpart that Yemen "is even more dramatic" now than that of the Rohingyas, who fled Myanmar by the hundreds of thousands to escape a crackdown.

How to enable access to humanitarian aid to people caught in a war supported on one side by Saudi Arabia and by Iran on the other is a topic the European Union and the U.S. must try to resolve, he said.

The humanitarian crisis worsened after a rocket was fired in November to Riyadh, and Saudi restricted access to Yemen.

The U.N.'s human rights chief has appointed experts from Tunisia, Britain and Australia to a panel tasked with monitoring and reporting on rights abuses in Yemen.

The U.N. Human Rights Council in September approved the creation of the group of "eminent international and regional experts." The high commissioner for human rights, Zeid Ra'ad al-Hussein, said Monday it will be chaired by Kamel Jendoubi of Tunisia and will include Britain's Charles Garraway and Melissa Parke of Australia.

The group is to submit a report to Zeid by September 2018.

Zeid said its creation "is an important step toward accountability and ending impunity for the serious violations of human rights committed by all sides in Yemen amid a worsening humanitarian crisis in the country, and ensuring justice and remedy for the victims."

Witnesses say that fighting has subsided in the Yemeni capital Sanaa hours after the announcement of the death of Yemen's former president Ali Abdullah Saleh.

Residents said that they saw fighters hand themselves in and others withdraw from their positions. Al-Masirah TV network, run by the Shiite Houthis rebels, also showed footage of what appeared to be Saleh's forces handing themselves in. The channel had earlier carried a broadcast in which the Houthi's leader, Abdul-Malek al-Houthi, said his forces had killed Saleh for "treason."

In other areas like Fag Attan, Saleh's forces are still surrounded by Houthis. It was not immediately clear if the fighting would resume again in the morning.

The Houthis have also seized the homes of Saleh and some of his family members in a southern district of Sanaa — the so-called Political District — which witnessed some of the heaviest clashes.

The Interior Ministry, affiliated with the Houthis, said that Houthi-allied security forces are carrying out raids and arrests at the homes of Saleh's associates and supporters.

The leader of Yemen's Shiite Houthi rebels says his forces have killed the country's former president Ali Abdullah Saleh for his "treason."

Abdul-Malek al-Houthi, in a lengthy speech aired on the Houthis' TV network al-Masirah, described Saleh's killing as a "historic defeat to the forces of the coalition," referring to the Saudi-led alliance of Arab states fighting them.

Without mentioning Saleh by name, he said that he knew about Saleh's communication with the coalition and his efforts to turn against the Houthis. He added that he had sent several warnings to Saleh.

"We have notified the leader of the traitor and criminal militias to retract, be wise, to stop his militias from continuing committing crimes," he said, "Today is the day of the fall of the conspiracy of betrayal and treason. It's a dark day for the forces of the coalition."

He stressed that the Houthis, also known as Ansar Allah, have no enmity toward Saleh's party, the General People's Congress, which was Yemen's ruling party under Saleh but is now divided.

Officials from various sides, including the Houthis' opponents, have confirmed that the video shows the former powerful president.

Abdel-Rahman al-Ahnomi, a top Houthi media official, told The Associated Press that Saleh was killed near Marib, the eastern province bordering Saudi Arabia. "He was trying to flee to Saudi," he said.

The video, apparently shot by one of the attackers, showed a Houthi crowd picking up Saleh's dead body, wrapped in a colorful blanket, off the ground and lifting it onto a pickup truck. Saleh's eyes appear wide open, the back of his head badly injured, and his shirt blood stained under a dark suit.

A senior Yemeni government official affiliated with Houthis' rivals and some of Saleh's associates, such as Nabil al-Soufi and Ali al-Bukhiti, confirmed his death on social media and TV interviews.

Yemen's Houthi rebels say former President Ali Abdullah Saleh, who ruled the country for more than three decades and played a pivotal role in the country's ongoing civil war, has been killed.

The Houthi-run Masirah TV announced the death of the "leader of the traitors" on Monday, referring to Saleh, who until last week was in a fragile alliance with the rebels. It gave no further details.

A senior official with Yemen's internationally-recognized government confirmed to The Associated Press that Saleh had been killed. He sent a video purportedly showing Saleh's body being carried away by a group of armed men chanting, "God is Great."

The official spoke on condition of anonymity because he wasn't authorized to speak to the press. It was not immediately possible to confirm the authenticity of the video, which was circulating widely.

Saleh ruled Yemen for more than three decades until he was forced to resign following an Arab Spring uprising in 2011. He remained in the country, however, and continued to wield power from behind the scenes. In 2014, his forces allied with the Houthis despite the fact that as president he had gone to war with them on more than one occasion.

The rebel alliance splintered last week, setting off heavy clashes between the Houthis and Saleh's forces.

Yemenis in the war-torn country's capital crowded into basements overnight as Saudi-led fighter jets pounded the positions of Houthi rebels, who are now fighting forces loyal to a former president for control of the city.

Fighting erupted between the Iranian-allied Shiite rebels and forces loyal to Ali Abdullah Saleh last week, unraveling their fragile alliance, formed in the face of the internationally-recognized government and Saudi-led coalition.

The breakdown of the alliance has led the coalition to step up its bombing of Houthi positions, in support of Saleh's forces.