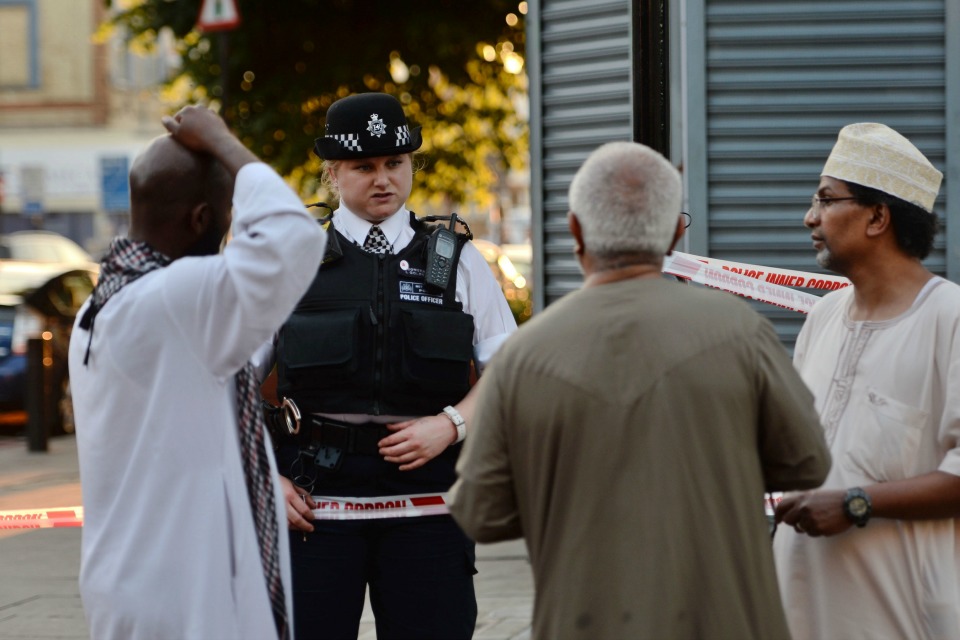 LONDON (AP) — British authorities and Islamic leaders moved swiftly to ease concerns in the Muslim community after a man plowed his vehicle into a crowd of worshippers outside a north London mosque early Monday, injuring at least nine people.

One man died at the scene, although he had been receiving first aid at the time of the incident and it wasn't clear if he died as a result of the attack or from something else.

Police are treating the incident as a terror attack. The chaos outside the Finsbury Park Mosque follows three Islamist-inspired attacks over the past three months that have triggered a surge in hate crimes around Britain.

The Metropolitan Police Service, already stretched by its investigations of the earlier attacks and a high-rise apartment fire that is believed to have killed 79 people, immediately announced it was putting extra patrols on the streets to protect the public.

Police will assess the security of mosques and provide any additional resources needed ahead of celebrations marking the end of the holy month of Ramadan, Prime Minister Theresa May announced.

"This was an attack on Muslims near their place of worship," she said in a televised address. "And like all terrorism, in whatever form, it shares the same fundamental goal. It seeks to drive us apart — and to break the precious bonds of solidarity and citizenship that we share in this country. We will not let this happen."

The attack occurred about 12:20 a.m. when a speeding van swerved into worshippers who were giving first aid to a man outside the mosque. That man later died.

Police said the 47-year-old white man who drove the van has been arrested on suspicion of the commission, preparation or instigation of terrorism, including murder and attempted murder. A mob surrounded the man and witnesses said the crowd began attacking him. A local imam, Mohammed Mahmoud, said he organized a group of people and shielded the man until police could take him away.

"By God's grace, we were able to protect him from harm," he said.

"We have a witness saying that the guy who did what he did, the driver of the van, said 'I did my bit,' which means he's not mentally ill," Kacimi said. "This person was conscious. He did what he did deliberately to hit and kill as many Muslims as possible, so he is a terrorist."

But Kacimi said there was no need for the community to panic, because police and government officials have been "very, very supportive."

"At this stage, we are calling for calm," he said.

Mayor Sadiq Khan, London's first Muslim mayor, urged residents to focus on their shared values and to stand together during an unprecedented period in the capital's history. The attack Monday hits a community already feeling targeted in the fallout from the London Bridge killings and other attacks blamed on Islamic extremists.

British security officials, speaking on condition of anonymity in line with official policy, said hate crimes directed at Muslims have increased nearly five-fold in the wake of several attacks in Britain.

"While this appears to be an attack on a particular community, like the terrible attacks in Manchester, Westminster and London Bridge, it is also an assault on all our shared values of tolerance, freedom and respect," Khan said.

Vowing "zero tolerance" for hate crimes, Khan declared "we will not allow these terrorists to succeed ... we will stay a strong city."

The attack laid bare the frustrations of Muslims who feel they've been unfairly equated with the extremists who carry out atrocities in the name of Islam. Early police caution about declaring the incident terrorist-related was interpreted by the community as discriminatory.

Ali Habib, a 23-year-old student, said residents are angry that the mosque attack hasn't been portrayed in the same light as other attacks across Britain.

"There has been an outpouring of sympathy for all for the recent terror attacks but hardly a whisper on this attack," he said. "People are both scared and angry. Parents are scared to send their children to evening prayers. I don't think people understand how much these attacks affect all of us."

May attempted to counter that feeling in her speech, declaring that police arrived at the scene within one minute, and that it was classified as a possible terror attack in eight minutes. The prime minister, who has been criticized for failing to show compassion to victims, traveled to the mosque attack site within hours, and met with community and faith leaders.

Standing outside the door of Downing Street, she sought to convey that Britain would not fold in the face of the unprecedented series of horrific events — and that London in particular would stand as a bulwark against anything that sought to undermine freedom.

The Finsbury Park Mosque was associated with extremist ideology for several years after the 9/11 attacks in the United States, but it was shut down and reorganized. It has not been associated with radical views for more than a decade.

The mosque's current leaders say they support inter-faith dialogue and want to serve the nearby community in north London, which is located near Emirates Stadium, home of the Arsenal soccer club. Labour Party leader Jeremy Corbyn, who represents the area, uses the mosque as a place to meet with residents.

Britain's terror alert level is at "severe," meaning security officials believe an attack is highly likely, and a series of extremist attacks have struck across the country in the last few months.

On June 3, Islamic extremists used a vehicle and then knives to kill eight people and wound dozens of others on London Bridge and in the popular Borough Market area. Police shot and killed the three Islamic extremists who carried out the attack.

In March, a man plowed a rented SUV into pedestrians on London's Westminster Bridge, killing four people before stabbing a police officer to death outside Parliament. He was also killed by police.

To the north, Manchester was hit by a deadly attack May 22 when a suicide bomber killed 22 people at an Ariana Grande concert.