When Neo-Nazis Have Doubts, There's a Number to Call 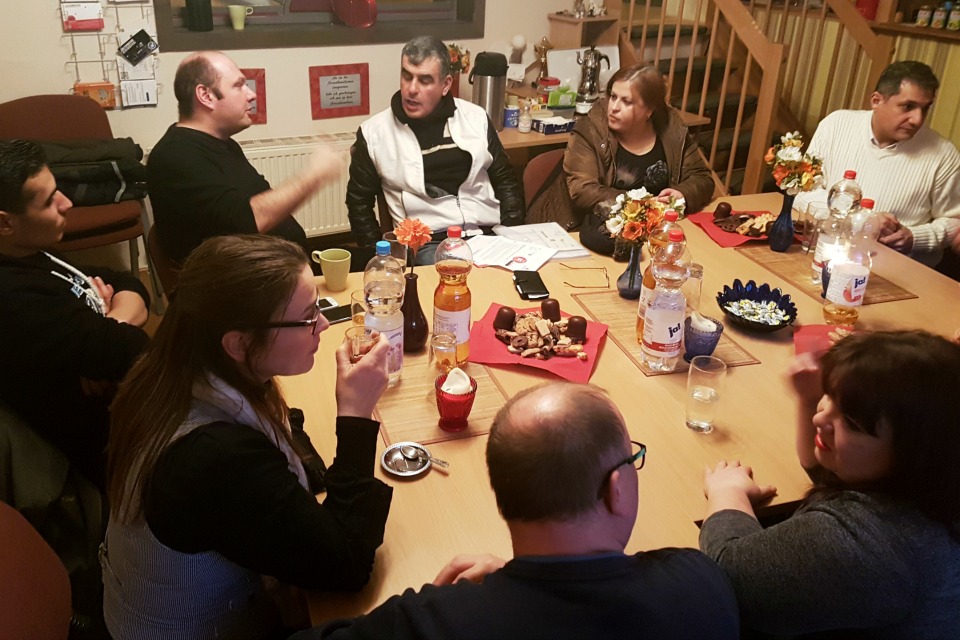 But when fellow neo-Nazis attacked a friend, Benneckenstein found the doubts he'd ignored for years coming to the surface.

"It was a rude awakening," he recalled. "You have an idea of what's wrong with the world and believe you've discovered hidden truths... And to then realize that everything you've done to yourself and others in the past years was built on lies is a bitter moment."

After almost a decade on the far-right fringes, the 30-year-old is now part of a small but effective network of former neo-Nazis helping people to leave the scene. Spread across Germany, they work closely with an organization called EXIT that provides quick, unbureaucratic advice to extremists who want out.

At a time when extreme nationalism is on the rise in Europe again, EXIT has helped hundreds of neo-Nazis start a new life, according to its founder Bernd Wagner, a former East German police detective. He says EXIT has an edge over government-run programs because those answering its hotline have dropped out of the far-right movement themselves.

These former neo-Nazis call themselves the 'Action Group' and try to meet in person at least once a year. The meetings aren't advertised, and journalists aren't invited because some members fear their identity could be revealed to friends and colleagues unaware of their past. Last month The Associated Press received unprecedented access to the group's two-day retreat at a former police training center tucked away in a wood in the eastern state of Saxony — notorious for its strong far-right presence.

About a dozen people — mostly young, mostly male — came to talk about their past and brainstorm ways to reach out to those still inside the neo-Nazi scene. Wagner says the Action Group gives ex-Nazis a way to become involved in political campaigns again where other organizations might reject them due to their past. The meetings also help them deal with their own demons.

"It does a lot for people that they can talk about the old days, not like old warriors who've won battles but about the mistakes they made in their lives," said Wagner. "They're still looking for direction in a highly complex and diverse reality."

That includes people such as Falk Isernhagen.

Bespectacled and slight, he felt he was an outsider as a white kid in a mostly migrant neighborhood of Berlin. When older white students at his high school invited him along to football games, he was grateful.

Soon he was marching alongside them at far-right demonstrations. Then he offered to run their website.

Isernhagen left when the pressure from his comrades became too much. Shortly after making the call to EXIT , he was attacked by unknown assailants and ended up in hospital, under police protection.

Instead of just turning his back on the far right, he chose to help others find their way out, too. "I felt I'd done enough damage so I wanted to make up for it a bit," he said.

But it's not all penance for the former neo-Nazis who met in Schleife, a village near the Polish border, in early November. Sitting on a frigid porch outside the training center, Isernhagen grinned as he recalled the previous nights' larks.

"It's really interesting to work with people who have the same or similar experiences," he said. "Because you feel that they understand what you went through and felt. That welds people together."

People who join the far right typically share a common history: an early interest in politics, a feeling that they were outsiders or underdogs, and anger at what they regarded as injustice around them.

Benneckenstein was 13 when he came into contact with white nationalism. At first it was more teenage rebellion than genuine sympathy that drew him to the extreme right.

"I found the Nazi scene abhorrent. My little brother has Down Syndrome and of course I knew what happened to disabled people under Hitler," he recalled.

But Benneckenstein enjoyed the music his new friends were listening to, and like many young Germans, he felt his generation was being unfairly penalized for their grandparents' mistakes. He fell for historical revisionism, to the extent of denying the Holocaust.

"I wanted to rid myself of a certain guilt one has because of Germany's history," he said.

Soon his friends were bombarding him with information. There was "fun, action and party," he said, but mainly it was about radicalizing young people.

First they radicalized him. Then he radicalized others. Going by the stage name 'Flex,' he composed nationalist songs that included lines such "Am I criminal because I want to change the world" and "I'm ready to rise up against everything that stands in our way."

Some of those in his circle were arrested for planning to bomb a Jewish center in Munich. Benneckenstein insists he was never involved in organized violence, though it was seen as a legitimate response to attacks from left-wing demonstrators. "If you want to be part of it, as I did, you have to be able to use violence," he said.

A few months after his friends were attacked by other neo-Nazis, Benneckenstein — who resembles a young Matt Damon — found himself in jail. It was the last straw. He and his girlfriend called EXIT seeking help to leave the far-right movement. Since then Benneckenstein has become the go-to guy for remorseful neo-Nazis in Germany's southern state of Bavaria .

First contact requires trust on both sides, as well as a willingness to hear the other side out, he said. Some people are ready to quit the far right immediately. "We develop a scenario that allows people to leave the scene quietly."

"Then there are the others who get in touch and want to talk through the whole ideology, which is also an important step. Because if they contact me they are contacting a traitor."

But Benneckenstein also has an advantage. Unlike a police officer or social worker, he knows firsthand what neo-Nazis believe and where their weak spots are.

For many, the shift from mainstream politics to far-right ideology involved embracing anti-Semitic conspiracy theories. Unraveling those theories is a difficult but important part of the process of leaving the far-right scene, which Germany's domestic intelligence service says involved some 22,600 people last year.

Members of the Action Group, of whom there are now almost 40, say they recognize those theories in the current debate over Germany's immigration policy. The country has seen a surge in attacks against migrants over the past two years amid an unprecedented influx of refugees. Far-right groups have claimed that the government is intentionally trying to import foreigners to weaken the German population — or even abolish it.

To former neo-Nazis like Benneckenstein, such developments are worrying.

"I'm hardly concerned by the refugees, but I am concerned by the mood that's resulting from this," he said. "Everyone can see how the political picture in Germany is changing at the moment."

The situation has given the Action Group's work greater importance. Two years ago it made headlines when it got the public to 'sponsor' a far-right march. The stunt caught the neo-Nazis off guard: for every meter (yard) they marched, ten euros (dollars) were donated to an anti-Nazi campaign.

The group followed up last year by soliciting donations for each racist post on Facebook — more posts, more donations to organizations that work to counter hate speech. Their stunts have since been copied by groups outside Germany, and EXIT now has a sister organization in the United States.

Some of the Action Group's members have come a long way since leaving the far right.

By his mid-20s, Stefan Rochow had risen from teenage activist to leader of the National Democratic Party's youth wing, responsible for recruiting new members and shaping the party's ideology. Outwardly he blamed foreigners and mainstream politicians for his country's woes, but inside Rochow was gripped by doubt. Corruption within the party and his own religious awakening made him question the ideas he'd spent more than a decade fighting for.

"I lived in two worlds," he recalls. "My whole personality was completely split."

With the help of his girlfriend and a Catholic priest, Rochow eventually managed to leave the party, a process that took three years. The turmoil and difficulties he experienced moved him to turn the tables on his erstwhile comrades.

Rochow remembers the "huge hole" he felt in his life after finally leaving the far-right party in 2008. His new-found Christian faith helped fill the void.

These days he's busier than ever. Aside from running his own business in the northern city of Schwerin and helping convert neo-Nazis, Rochow works in a cafe Wednesday afternoons — helping refugees from Syria and Iraq adapt to life in Germany.