Haitians Await Aid, Help Each Other Regain Some Normalcy 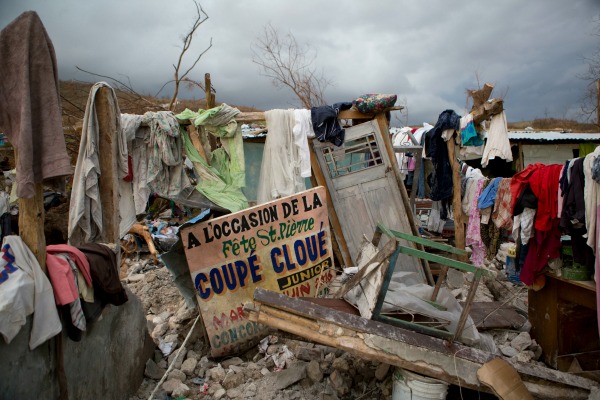 LES CAYES, Haiti (AP) — People throughout Haiti's devastated southwest peninsula formed makeshift brigades Tuesday to clear debris and try to regain some semblance of their pre-hurricane lives as they grew increasingly angry about the delay in aid for remote communities more than a week after the Category 4 storm hit.

A community group that formed in the southern seaside community of Les Anglais began clearing tree limbs from streets and placing them into piles while others gathered scraps of wood to start rebuilding homes destroyed by Hurricane Matthew.

Carpenter James Nassau donned a white construction helmet as he rebuilt a neighbor's wall with recycled wood, hoping to earn a little money to take care of 10 children, including those left behind by his brother, who died in the storm.

"My brother left five kids, and now I've got to take care of them," he said. "Nobody has come to help."

The scene repeated itself across small seaside and mountain villages dotting the peninsula, where people pointed out helicopters buzzing overhead but questioned why they haven't received any help.

Israel Banissa, a carpenter who lives near the tiny mountain town of Moron, said a Red Cross assessment team stopped outside his village to ask people questions but did not leave any supplies.

"There's no aid that's come here," he said as he sawed wood to help rebuild his home and dozens of others. "I don't think they care about the people up here."

Some Haitians opted to travel to the capital of Port-au-Prince and stay with relatives until the situation slowly improved.

The U.N. humanitarian agency in Geneva has made an emergency appeal for nearly $120 million in aid, saying about 750,000 people in southwest Haiti alone will need "life-saving assistance and protection" in the next three months. U.N. officials said earlier that at least 1.4 million people across the region need assistance and that 2.1 million overall have been affected by the hurricane. Some 175,000 people remain in shelters.

The National Civil Protection headquarters in Port-au-Prince raised the official nationwide death toll to 372, which included at least 198 deaths in Grand-Anse. But local officials have said the toll in Grand-Anse alone tops 500.

Those who survived the storm still faced great challenges.

In the western seaside village of Dame Marie, 300 patients with festering wounds lay silently on beds at the main hospital waiting for medicine a week after the storm hit.

Among the injured was Beauvoir Luckner, a cobbler and farmer who walked 12 kilometers (seven miles) in three days after a tree fell on his house, crushing his leg and killing his mother. The leg might have to be amputated, but all doctors can do is clean his wounds because the hospital has run out of everything, including painkillers.

"There's no water, no antibiotics," Dr. Herby Jean told The Associated Press. "Everything is depleted. ... We hear helicopters flying overhead, but we're not getting anything."

Meanwhile, Luckner lay on a mattress with no sheets, a bandage wrapped around his left leg.

"It took a lot of misery to get here and now that I'm here, there's still misery," he said.

Concern also was growing about an increase in cases of cholera, which has already killed roughly 10,000 people and sickened more than 800,000 since 2010.

Dr. Dominique Legros, a top cholera official at the World Health Organization, said Tuesday that the agency had decided to send 1 million doses of cholera vaccine to Haiti "as soon as possible" and said safe drinking water and treatment of those affected by the disease are top priorities.

U.N. Secretary-General Ban Ki-moon told reporters in New York on Monday that a "massive response" was needed to help Haiti emerge from the storm's aftermath. He noted that crops and food reserves were destroyed and that at least 300 schools have been damaged.

"At least 1.4 million people need assistance at this time," he said. "These numbers and needs are growing as more affected areas are reached. Tensions are already mounting as people await help."