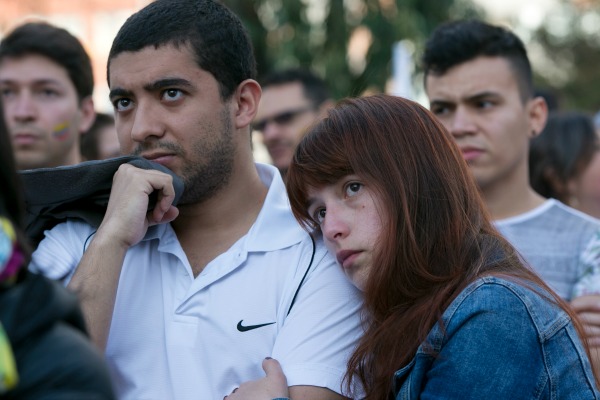 BOGOTA, Colombia— A stunning referendum defeat for a peace deal with leftist rebels leaves Colombians with no Plan B to save an accord that sought to bring an end to a half century of hostilities.

Instead of winning by an almost two-to-one margin on Sunday as pre-election polls had predicted, the accord with the Revolutionary Armed Forces of Colombia lost by a razor-thin margin, 49.8 percent to 50.2 percent.

Both President Juan Manuel Santos and leaders of the FARC, after four years of grueling negotiations, vowed to push ahead, giving no hint they want to resume a war that has already killed 220,000 people and displaced 8 million.

"I won't give up. I'll continue search for peace until the last moment of my mandate," Santos said in a televised address appealing for calm.

But it's not clear how the already unpopular Santos can save the deal following the political earthquake, comparable to Britain's vote to exit the European Union. His chief negotiator, Humberto de la Calle, offered his resignation Monday, assuming what he called "complete responsibility" for the defeat.

It's unclear whether Santos will accept the offer or, as he previously announced, send him to Cuba with other negotiators to confer with FARC's top leaders, who watched the results with disbelief after ordering drinks and cigars at Club Havana, once Cuba's most exclusive beach club.

"The FARC deeply regret that the destructive power of those who sow hatred and revenge have influenced the Colombian people's opinion," the FARC's top commander, a guerrilla known as Timochenko, told reporters.

The loss for the government was even more shocking considering the huge support for the accord among foreign leaders, who have heralded it as a model for a world beset by political violence and terrorism. Many heads of state as well as U.N. Secretary-General Ban Ki-moon and U.S. Secretary of State John Kerry were present when Santos and Timochenko signed the deal less than a week ago in an elaborate, emotion-filled ceremony in the historic city of Cartagena.

"In Cartagena, I witnessed the profound desire of the Colombian people to end the violence," Ban Ki-moon told reporters in Geneva, adding that he urgently dispatched his representative to the peace talks to Cuba for consultations. "I count on them to press ahead until they achieve secure and lasting peace."

"Colombians have expressed their commitment to settle their differences through institutions and dialogue rather than violence," he said.

Santos' former boss and chief rival, former President Alvaro Uribe, led the grass-roots campaign against the accord. With none of the government's huge PR machine, an angry Uribe gave voice to millions of Colombians, many of them victims of the FARC like him, who bristled at provisions in the 297-page accord sparing rebels jail time if they confessed their crimes and instead reserved them 10 seats in Congress.

Uribe, in prepared remarks from his ranch outside Medellin after the results were in, insisted on "correctives" that guarantee respect for the constitution, respect for private enterprise and justice without impunity. But he didn't specify whether he would join Santos in trying to salvage the deal, and took more swipes at the FARC, demanding it end drug trafficking and extortion.

"The entire accord was full of impunity," said Ricardo Bernal, 60, celebrating the victory for the "no" side in a Bogota neighborhood where opponents were gathered. "We all want peace but there have to be adjustments made."

Across town, hundreds of supporters of the peace deal who had gathered in a hotel ballroom for what they expected would be a victory party with Santos wept in despair.

The FARC's 7,000 guerrilla fighters are unlikely to return to the battlefield any time soon. For now, a cease-fire remains in place.

One option for Santos would be to reopen negotiations, something he had ruled out previously and his chief negotiator said would be "catastrophic." The president, who has a little under two years left in office, could also seek to bypass another popular vote and ratify the accord in Congress or by calling a constitutional convention, something both the FARC and Uribe have previously favored.

"I've always believed in a wise Chinese proverb, to look for opportunities in any situation. And here we have an opportunity that's opening up, with the new political reality that has demonstrated itself in the referendum," Santos said Sunday night at the presidential palace.

But bringing Santos and Uribe together might be harder than achieving peace with the FARC. Santos served as Uribe's defense minister, when they worked together with the U.S. to drive the FARC to the edge of the jungles, but the two haven't spoken for years and frequently trade insults.

One of the reasons for the surprise defeat was low turnout, with only 37 percent of the electorate bothering to vote, a further sign to some analysts that Colombians' enthusiasm for the accord was lacking. Heavy rains from Hurricane Matthew dampened voting along the Caribbean coast, where the government's electoral machinery is strongest and the "yes" vote won by a double-digit margin.

The campaign exposed deep rifts in Colombian society, dividing many families and making clear the road to reconciliation would have been long and torturous even had the accord passed. Colombians overwhelmingly loathe the FARC, which the U.S. considers a terrorist group, and many considered the accord an insult to victims of the long-running conflict.

But while urban voters who were being leaned on to pay for the peace largely voted against the accord, victims in many areas hardest hit by the conflict overwhelmingly endorsed it. That was the case of Tumaco, a port city on the Pacific Ocean which for years suffered FARC attacks and on Sunday voted 71 to 29 percent in favor of the accord.

The city's mayor, Emilse Angulo, said that panic and fear overtook the town Sunday night as residents confronted the thought that violence they thought had been put to a definitive rest could soon return.

"We're indignant. Our country is the way it is because there are people who think as long as they're doing well the suffering of the rest of us doesn't matter," she told The Associated Press. "If Colombia in its entirety doesn't enjoy prosperity, we're going to keep killing ourselves."

Joshua Goodman is on Twitter: https://twitter.com/apjoshgoodman. His work can be found athttp://bigstory.ap.org/journalist/joshua-goodman.

Andrea Rodriguez is on Twitter: https://twitter.com/ARodriguezAP. Her work can be found athttp://bigstory.ap.org/content/andrea-rodriguez.