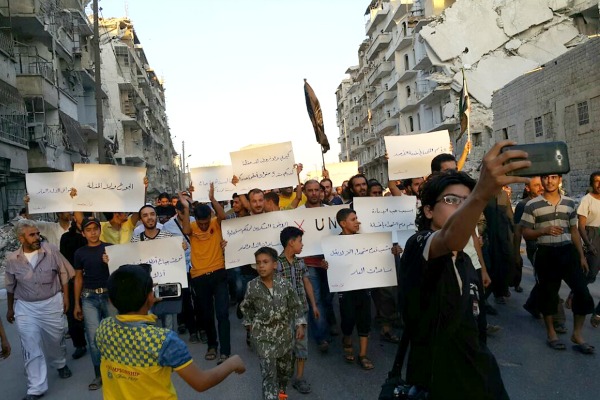 BEIRUT (AP) — The Syrian cease-fire appeared to be holding on Tuesday despite sporadic and minor violations of the U.S. and Russian brokered truce, which is aimed at paving the way for the delivery of humanitarian aid and the revival of peace talks.

The deal, hammered out by U.S. Secretary of State John Kerry and his Russian counterpart Sergey Lavrov last week, officially came into effect at sunset on Monday. The Syrian army said it would abide by the cease-fire until midnight Sunday, while maintaining its right to defend itself against any violations.

Syria's largest insurgent groups have expressed misgivings about the deal, which allows for strikes against al-Qaida-linked militants who fight alongside the rebels. Jabhat Fatah al-Sham, an al-Qaida-linked group previously known as the Nusra Front, has denounced the agreement.

The deal marks the second attempt this year to try reduce violence in war-torn Syria, where the 5 ½ year conflict has killed more than 250,000 people and displaced half the country's population of 11 million. A truce in late February collapsed weeks later.

The first week of the truce will be crucial. During that time, all fighting between Syrian President Bashar Assad's forces and the rebels is to stop. However, Assad's forces can continue airstrikes against the Islamic State group and al-Qaida-linked militants.

If the calm holds for seven days, the U.S. and Russian militaries would then set up a new center to coordinate strikes against IS and Jabhat Fatah al-Sham.

Under the truce, Assad's forces are no longer supposed to bomb Syria's opposition. The Syrian air force has been dropping barrel bombs on civilian areas under the pretext of targeting militants.

For the moment, "calm is prevailing in all areas," said Ahmad al-Masalmeh, an opposition activist in the southern province of Daraa — where the 2011 uprising began.

In the northern city of Aleppo, which has seen heavy fighting in recent months, opposition activists said rebel-held parts of the city were calm on Tuesday morning but that many people were still hunkering down in their homes, fearful of going out. Aleppo-based activist Baraa al-Halaby said no aid deliveries, which are also part of the cease-fire deal, have yet entered the contested area.

Syrian state news agency SANA said rebels fired three shells at a government-held neighborhood in Aleppo. It also reported shelling near the Castello road, northwest of the city, and the Ramouseh area in the south — both main arteries leading to Aleppo.

Rami Abdurrahman, head of the Syrian Observatory for Human Rights, said there were minor violations in central Hama province. Another activist group, the Local Coordination Committees, reported shelling in Aleppo and the southern region of Quneitra.

The Britain-based Observatory, which relies on a network of activists inside Syria, said no one has been killed or wounded since the truce went into effect.

Turkey's state-run news agency said 20 U.N. trucks have left Turkey to deliver humanitarian aid to Aleppo. The Anadolu agency said the trucks left around noon, with a total of 40 trucks expected to cross the border by the end of the day.

The deal's architects hope the cease-fire will pave the way for an extended period of restraint that can serve as the foundation for peace talks. As the cease-fire came into effect, Kerry urged Syrian rebels to distance themselves from al-Qaida-linked militants.

Russia is pushing to make public the text of the cease-fire deal, but Lavrov told reporters on Tuesday that the U.S. opposes such a move.

Lavrov said Moscow "has nothing to hide" and wants the U.N. Security Council to formally approve the Syria truce deal as well.

The Observatory meanwhile said more than 300,000 people have been killed since the conflict began in 2011. It said on Tuesday that the dead include 59,000 government troops and more than 86,000 civilians. The rest include rebels, foreign fighters, Hezbollah militants, defectors from the Syrian army and others.

The Observatory says its records show that 301,781 people have been killed in Syria from March 2011 until the truce went into effect.

The group says the real death toll could be 70,000 higher since many insurgent groups don't announce their deaths and because there are other deaths that are not documented.

In other developments, the Syrian military said Tuesday that it had shot down two Israeli aircraft — a warplane and a drone — near the Israeli-controlled part of the Golan Heights. The Israeli military quickly denied the claim.

The Israeli military said "two surface-to-air missiles were launched from Syria after the mission overnight to target Syrian artillery positions" but that the safety of Israeli planes was not compromised.

It was the fifth case since last week in which fighting in Syria spilled over into Israel, and the first since the truce started. Israel has largely remained on the sidelines of the fighting in Syria, but has carried out reprisals on Syrian positions when errant fire previously landed in Israel.