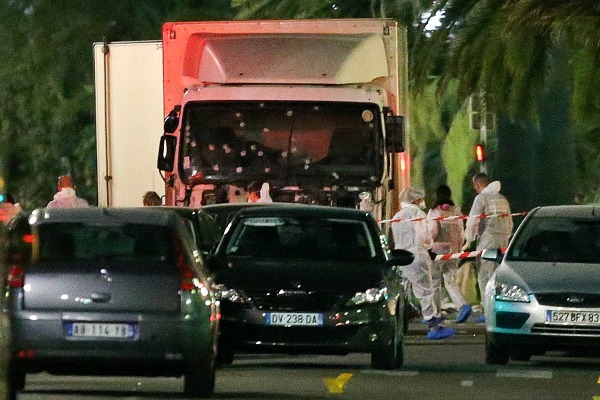 NICE, France (AP) — As new details emerged Friday about the Tunisian man who drove a truck through crowds celebrating Bastille Day in Nice, killing 84 people and wounding 202 others, French leaders extended a state of emergency imposed after the Nov. 13 Paris attacks and vowed to deploy thousands of police reservists on the streets.

French officials called it an undeniable act of terror, but no group claimed responsibility and it wasn't clear if the 31-year-old delivery driver blamed for the carnage had extremist ties.

The country is still reeling from the Nov. 13 attacks, which killed 130 people at the Bataclan concert hall, Paris restaurants and cafes, and the national stadium, and a separate January 2015 in Paris attack that targeted journalists at the satirical magazine Charlie Hebdo and Jews at a kosher supermarket.

Both attacks were claimed by the Islamic State group, and French President Francois Hollande was booed in Nice on Friday by people who blamed government authorities for failing to enforce sufficient security measures.

Thursday night's massacre of pedestrians leaving a fireworks display along the southern city's famed boulevard ended only after police killed the armed attacker in a hail of bullets.

Video shot by witnesses shows the truck coming under police gunfire as it drives through an intersection along the palm tree-lined Promenade des Anglais, which had been turned into a pedestrian walkway for the national day celebrations. Crowds flee in panic, taking shelter in shops, hotels or leaping off the elevated pavement onto the beach below. Police finally surround the stationary truck and fatally shoot its driver.

Police identified the attacker as Mohamed Bouhlel (pronounced "boo-lel"), a 31-year-old Nice resident, and said he had drawn a gun on them. The truck's front windshield was riddled with bullets, Bouhlel's body slumped inside.

Chief prosecutor Francois Molins said police risked their own lives trying to stop the truck as it traveled 2 kilometers (1 ¼ miles) down the promenade.

Molins said Bouhlel's estranged wife was arrested in Nice on Friday, while Bouhlel narrowly avoided being put behind bars months before the attack. He said Bouhlel had received a six-month prison sentence in March for a conviction for assault with a weapon, but other legal officials said his sentence was suspended because it was his first conviction. The weapon used was a palette against another driver after a traffic accident.

Witnesses said Bouhlel first crashed into crowds near the five-star Hotel Negresco, then rolled slowly down an otherwise empty road chased by police on foot and, possibly, one on a motorcycle.

German tourist Richard Gutjahr filmed the moment when the unidentified motorcyclist sped alongside the truck, hopping a curb to try to grab hold of the driver's door as two police officers on foot nearby fired a single shot each at the driver. The motorcyclist fell to the ground, coming within inches of being struck by truck tires that partly crushed the motorcycle, but got up and briefly climbed aboard the side of the accelerating truck before jumping off again.

The truck surged through an intersection into screaming crowds, where Gutjahr could hear the final confrontation involving 15 to 20 seconds of gunfire.

"Police were everywhere in town for the day. They clearly saw he was a danger, because that truck should never have been on the road," Gutjahr said.

Damien Allemand, a journalist for the Nice-Matin newspaper, said the fireworks display had finished and the crowd was dispersing when they heard noises and cries.

"A fraction of a second later, an enormous white truck came along at a crazy speed, turning the wheel to mow down the maximum number of people," he wrote. "I saw bodies flying like bowling pins along its route. Heard noises, cries that I will never forget."

On video, one person could be heard yelling, "Help my mother, please!" A pink girl's bicycle lay overturned by the side of the road.

"France was struck on the day of its national holiday, July 14, the symbol of liberty," Hollande said as he denounced "this monstrosity."

Flags were lowered to half-staff in Nice, Paris, Brussels and many capitals across Europe. Hollande announced a three-month extension to the state of emergency imposed after the Nov. 13 attacks and the government declared three days of national mourning to begin Saturday.

"Terrorism is a threat that weighs heavily upon France and will continue to weigh for a long time," Prime Minister Manuel Valls said. "We are facing a war that terrorism has brought to us. The goal of terrorists is to instill fear and panic. And France is a great country, and a great democracy, that will not allow itself to be destabilized."

But Hollande faced public anger after traveling to Nice, 690 kilometers (430 miles) south of Paris, to offer his condolences. He visited wounded people in two hospitals, including one where officials had treated about 50 children and teenagers for a wide range of injuries.

Molins said 52 of the 202 wounded in the attack remained in critical condition Friday night, 25 of them on life support. Among the dead, officials said, were 10 children as well as three Germans, two Americans, Moroccans and Armenians, and one person each from Russia, Switzerland and Ukraine. Two Scots were listed as missing.

Hollande and Christian Estrosi, the president of Nice's regional government of Provence Alpes d'Azur, ran a gantlet of booing crowds as their convoy passed through Nice.

"Mr. Estrosi is from the right. Mr. Hollande from the left. I say it and I say it loud: These two are killers," said Christelle Hespel, a Nice resident who accused both of overseeing negligent security.

Hollande's government, whose popularity has plumbed record lows, has recently been buffeted by allegations that France's intelligence services have failed to get a handle on the country's jihadist threat. France has known for years that it is a top Islamic State target, and it is the biggest source for European recruits for IS, with more than 1,000 fighting in Syria or Iraq.

Estrosi said some of the city's 1,200 security cameras had pinpointed the moment the attacker boarded the truck "in the hills of Nice" and were able to retrace his path to the promenade. He said he suspected Bouhlel did not act alone.

Broadcast footage showed a scene of horror along Nice's promenade, with broken bodies splayed on the asphalt, some piled near one another, others bleeding onto the roadway or twisted into unnatural shapes.

Estrosi told BFM TV that "the driver fired on the crowd, according to the police who killed him."

Stephane Erbs was heading back to his car with his wife, Rachel, and their two children when he saw the white truck bearing down on their position. He told The Associated Press that his first instinct was to throw his 7-year-old son, Celion, out of harm's way, while his wife pushed their daughter, 12-year-old Noemi, to safety.

"I threw him in the direction of the wall" that runs along the promenade, next to the beach, said Erbs, who broke seven ribs as he tried to get out of the way. His children were unharmed but by Friday afternoon his wife was still missing.

A Facebook site called "SOS Nice" has begun to attract posts from people hoping to be reunited with missing family members. The site was quickly filling up with photos, appeals and — in some cases — good news.

A 9-year-old and his family "have finally been found!" one recent post crowed atop a photo of a child in front of a birthday cake.

But it's not clear that other appeals have been answered.

"No news from Claire who was at the fireworks," one post said. "She's 18 years old. If you find her or if you have information, please contact us."\