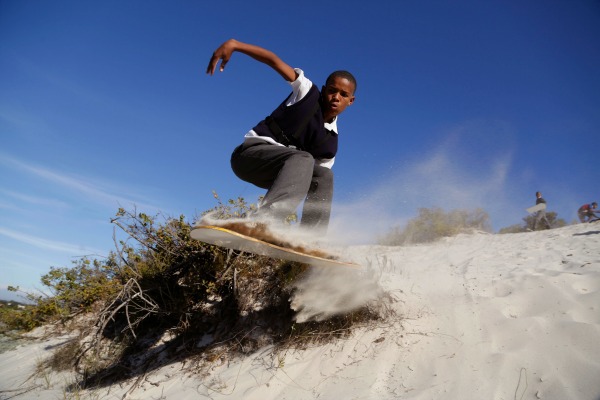 ATLANTIS, South Africa (AP) — Every Friday afternoon, some South African boys head for the sand dunes that surround Atlantis, a poor area on Cape Town's outskirts where drug gangs operate and shootings occur regularly. There, they slide and skid down the slopes on boards, forgetting for a while the hard streets where crime ensnares many young men.

"This is my boy," said 13-year-old Brendan van Maasdorp, affectionately gesturing to his sand board. He started surfing the dunes seven months ago and said it is the highlight of his week.

Sandboarding is an escape from the often treacherous environment in Atlantis, whose difficult history dates to South Africa's era of white minority rule. Most inhabitants are of mixed race and they or their parents and older relatives were forcibly relocated by the apartheid government from District Six, a central neighborhood in Cape Town, about 40 kilometers (25 miles) to the south.

Despite significant economic progress, South Africa continues to struggle with poverty and unemployment since its first all-race elections in 1994.

The sandboarding initiative in Atlantis was conceived by instructor Derek Bredenkamp after children asked if they could join the fun two years ago while he taught patrons of his company, Mamba Sandboarding. The boys wear helmets while sandboarding, which is similar to snowboarding, although occasionally a boy ignores the rule to use protective head gear.

"Atlantis is historically almost a dumping ground for people," said Bredenkamp, known as "Uncle Derek" to the boys.

In Atlantis, he said, it is "difficult to find work, and with that come all the social ills of drug abuse, alcohol abuse, women abuse and that whole sad, sick environment that these poor kids have to grow up in."

Members of the Atlantis Sandboarding Club range from 10 to 15 years old and are picked up for sandboarding on Friday afternoons from their homes in Neptune's Castle, an area of Atlantis. The pristine dunes contrast with the cramped rooms and graffiti-covered buildings where the children live. Gang names are scrawled on the walls of an area adjacent to high-rise apartment complexes where rival gangs have sometimes exchanged gunfire.

The biggest gangs in the area are called the "26s" and the "28s," part of a broad network of "number gangs" that are active in South Africa's prisons and get money from theft and the drug trade.

Sandboarder Tyrese Hugo, 15, said he has witnessed gang shootings in Neptune's Castle. Playing on the dunes is a welcome reprieve from neighborhood fears, he said.

Another Atlantis sandboarder is 13-year-old Mujahideen Koeberg, whose father is in jail for gang-related crimes. He said he doesn't want to follow in his father's footsteps and that sandboarding keeps him out of trouble.

Koeberg's mother, Shamiela Koeberg, has separated from his father. Sitting on a sofa supported by cinder blocks, she said Bredenkamp is a positive role model in her son's life. The sandboarding instructor has taught discipline to the children and shown them "many things outside the confines of this place," she said.

Bredenkamp discovered sandboarding while stationed in the 1970s with the South Africa's apartheid-era army in what is today Namibia, where desert sand dunes are much bigger than those in South Africa. He acknowledged that sandboarding cannot shield Atlantis boys from daily struggles but hopes the activity has a positive influence.

The boys, Bredenkamp said, should have fun, something "every child deserves."