Concern in Haiti Over Emerging Condition Linked to Zika 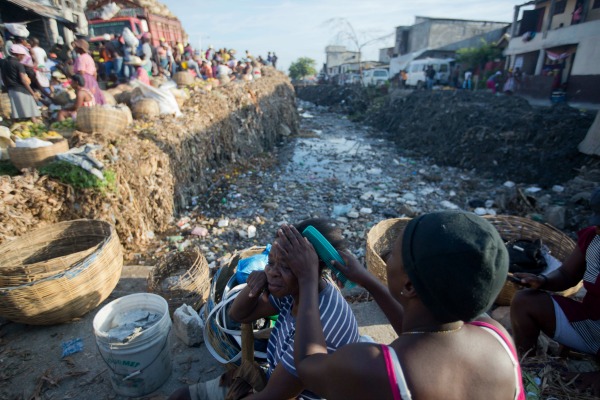 MIREBALAIS, Haiti (AP) — Berny Saint-Sauveur was moaning and incoherent when his family carried him into a hospital in central Haiti. He was unable to move, he later found out, because of an unusual paralysis syndrome linked to the mosquito-borne Zika virus.

"I thought I was a dead man," Saint-Sauveur recalled in an interview from his hospital bed, wearily rubbing bloodshot eyes.

After two weeks, the 46-year-old rice farmer was recovering from the nervous system illness known as Guillain-Barre and about to be discharged from the hospital in Mirebalais. Doctors and scientists, meanwhile, are bracing for the possibility of a wave of rare disorders triggered by Zika in an impoverished country that has faced one public health crisis after another and is fertile ground for mosquito-borne scourges.

Zika causes mild symptoms such as rash and fever in most people, but when Brazil reported outbreaks for the first time last year, doctors saw a dramatic increase in Guillain-Barre and a severe birth defect called microcephaly resulting in infants with abnormally small heads. The World Health Organization says there is now scientific consensus that Zika is a cause of both disorders.

Haiti's health ministry has reported no cases of microcephaly but 11 cases of Guillain-Barre, including two definitively linked to Zika by lab tests. But the extent of Haiti's Zika outbreak and the number of accompanying neurological disorders is a big unknown.

"Haiti is a bit of a black box and I'm not sure anyone has their arms around what's really happening currently," said Dr. Peter Hotez, dean of the National School of Tropical Medicine at Baylor College of Medicine in Texas.

Even after the worst cholera epidemic in recent history, Haiti's severely under-resourced health sector still does not have routine data collection systems that would allow experts to track and document disease outbreaks across one of the world's poorest countries.

Frontline physicians in Haiti say the assumption is that the uptick of Guillain-Barre cases is due to Zika because it coincides with the spreading epidemic. The WHO says Guillain-Barre reports have increased in 13 countries or territories where Zika is circulating.

"Since around the fall of 2015 we began seeing cases of Guillain-Barre that we had not seen prior to that point," said Dr. Nessa Meshkaty, an infectious disease physician working in the Partners in Health hospital in Mirebalais.

Some experts worry a relatively large number of microcephaly cases could hit Haiti later this year when women infected in early 2016 start giving birth. Health experts are trying to figure out what, if anything, they can do to prepare other than training staff to look out for symptoms.

"What are we going to do in Haiti if we have an epidemic of children with developmental delays in the context of already being completely under-resourced to deal with any developmental challenge a child has?" asked Dr. Louise Ivers, a senior health and policy adviser for Boston-based Partners in Health.

Haiti announced its first cases of Zika on Jan. 15. By April 23, there were 2,214 suspected cases, including 12 among pregnant women, according to the U.S. Centers for Disease Control and Prevention.

By comparison, Puerto Rico, a U.S. Caribbean island which has a third of Haiti's population and is located about 380 miles (600 kilometers) to the east, has had 925 confirmed cases of Zika, including one related death and a case of microcephaly in a fetus. The neighboring Dominican Republic has seen roughly 100 cases of Guillain-Barre, including six recent fatalities. The syndrome kills about one in 20 patients.

New research suggesting that the Zika virus has been present in Haiti since 2014 adds a layer of complexity to the epidemiological mystery.

Dr. John Lednicky, a researcher at the University of Florida's Emerging Pathogens Institute, was part of a team that found Zika in the plasma of three Haitian youngsters some two years before Haiti announced its first cases and months before Brazilian researchers verified the virus there. They published their findings on April 25.

Lednicky said it was still too early to tell if the mutating virus will cause the same serious consequences in Haiti as it has done in Brazil and other nations. He said a "large outbreak" in Haiti began in January 2016 and the prediction is that more birth defects will be seen as it becomes established.

"The more we find out about the virus, the more concerned we are, especially with regard to infections of the developing brains of fetuses," he said.

One thing is for certain: Any disease spread by the Aedes aegypti mosquito flourishes in Haiti because of the dense population in a country where few people have screened windows or can afford insect repellant. Malaria, dengue and, more recently, chikungunya have been widespread.

Haiti's government has stepped up fumigation and public service announcements about the importance of getting rid of mosquito breeding grounds. But mosquito control is minimal compared to more developed nations.

Some Haitians resent the fact that the state has failed to provide basic sanitation.

"How many precautions can we take when we have to live the way we do? They never pick up the garbage and I've never seen them spray insecticide around here," said Fabien Fleurimiste, gesturing at a trash-clogged gully with pools of stagnant water in the crowded Port-au-Prince district of Delmas 33.

Saint-Sauveur, the recovering Guillain-Barre patient, told The Associated Press that he was powerless to avoid mosquitoes in his village in the agricultural Artibonite Valley.

"They bite you anytime they want," he said.

The CDC and U.N. are assisting Haiti's health ministry with surveillance, vector control, and laboratory diagnostics. Until recently, blood samples from Haitians had to be shipped elsewhere for testing. But now, Haiti's National Laboratory can do blood analysis itself.

"We are monitoring Zika and its effects the best we can," said Dr. Joseph Donald Francois, a senior health ministry official. "But there are many challenges and we need far more resources."