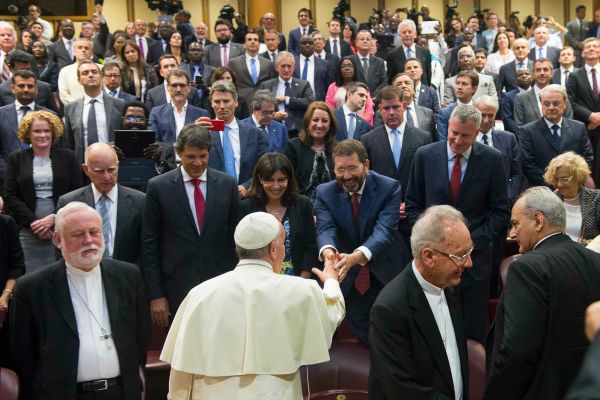 VATICAN CITY (AP) — Mayors from around the world declared Tuesday that climate change is real, man-made and must be stopped as a matter of moral imperative, gathering at the Vatican to announce new measures to fight global warming and bask in Pope Francis' ecological star power.

The Vatican invited the 60 mayors to a two-day conference to keep up pressure on world leaders ahead of U.N. climate negotiations in Paris later this year. The meeting also aimed to promote Francis' environment encyclical, which denounced what he calls a fossil fuel-based world economy that exploits the poor and destroys the Earth.

One by one, the mayors lined up to sign a final declaration stating that "human-induced climate change is a scientific reality and its effective control is a moral imperative for humanity." 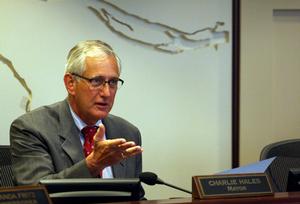 Francis told the gathering that he had "a lot of hope" that the Paris negotiations would succeed, but also warned the mayors: "You are the conscience of humanity."

Experts have long said that cities are key to reducing global warming since urban areas account for nearly three-quarters of human emissions. Mayor after mayor made an individual plea Tuesday for the world to change its ways.

Drawing rousing applause, California Gov. Jerry Brown denounced global warming deniers who he said were "bamboozling" the public and politicians with false information to persuade them that the world isn't getting warmer. California has enacted the toughest greenhouse gas emissions standards in North America.

"We have a very powerful opposition that, at least in my country, spends billions on trying to keep from office people such as yourselves and elect troglodytes and other deniers of the obvious science," said Brown, a former Jesuit seminarian.

"The Paris summit is just months away," de Blasio said. "We need to see it as the finish line of a sprint, and take every local action we can in the coming months to maximize the chance that our national governments will act boldly."

De Blasio is a founding member of an alliance of world cities that have committed to reducing emissions by 80 percent by 2050 or sooner.

San Francisco Mayor Edwin Lee announced new measures of his own, saying the city that takes its name from the pope's nature-loving namesake, St. Francis of Assisi, would transition its municipal fleet of fire trucks, buses and trucks from petroleum diesel to renewable energy sources by the end of the year.

Stockholm Mayor Karin Wanngard said the Paris climate talks in December must take fossil fuels off the table and focus instead on renewable energy sources.

"Climate negotiators must dare to push boundaries and exclude fossil fuels as an option and reward solutions that are long-term sustainable and renewable," she said.

Stockholm is one of the world's leaders in using renewable energy sources, with 75 percent of the city's public transport network running on renewable energy. Wanngard's goal is to make the Swedish capital fossil fuel-free by 2040.

The climax of Tuesday's inaugural session was the afternoon audience with Francis, who has become a hero to the environmental movement and has used his moral authority and enormous popularity to focus world attention on climate change and its effects on the poor.

Francis' other main priority has been to raise awareness about human trafficking. The Vatican conference is aimed at showing how both are related: The exploitation of the Earth and its most vulnerable people, with global warming often responsible for creating "environmental refugees" forced to flee homes because of drought or other climate-induced natural disasters.

Francis told the gathering that while he had high hopes about the Paris climate negotiations, he also wanted the United Nations to focus more on human trafficking.

"The United Nations has to deal with this," he said.

The Vatican is angling for the U.N.'s new Sustainable Development Goals, to be finalized in September, to make a solid reference to the problems of human trafficking and modern-day slavery. Day 2 of the Vatican conference was to deal specifically with the development goals.

"Addressing both of these phenomenon, climate change and modern slavery, is a herculean task for us as city administrators," said Tony Chammany, the mayor of Kochi, India.

Chammany detailed how years of global warming-induced drought in India was pushing impoverished farmers into cities, making them ripe for the "dark dungeons of slavery" and exploitation.

The conference got off to a sobering start by hearing from two Mexican women who were victims of modern-day slavery.

Ana Laura Peres Jaimes showed the mayors photos of some of the 600 scars she suffered as an indentured servant, forced to iron for hours a day without food, water or even a bathroom. She said she had to urinate in a plastic bag.

Karla Jacinto, a 22-year-old mother of two, told how she was forced into prostitution at the age of 12, servicing more than 30 men a day for the next four years until she was rescued.

"I didn't think I was worth anything. I thought I was just an object that was used and thrown away," she told the hushed audience hall.

"At the time of my birth, I was born into a society in Birmingham, Alabama, that existed as a close cousin of slavery called segregation," said Bell, who is African-American. "Segregation was designed to exploit individuals and groups based on race and race alone. It was for the economic purpose of cheap labor. It was to control society. It was to control human beings."

On climate, the conference's final declaration calls for financial incentives to transition economies from using fossil fuels to low-carbon and renewable energies and to shift public financing away from the military to "urgent investments" in sustainable development, with wealthy countries helping poorer ones.

And it says political leaders have a "special responsibility" at the Paris talks to approve a "bold climate agreement that confines global warming to a limit safe for humanity, while protecting the poor and the vulnerable from ongoing climate change that gravely endangers their lives."