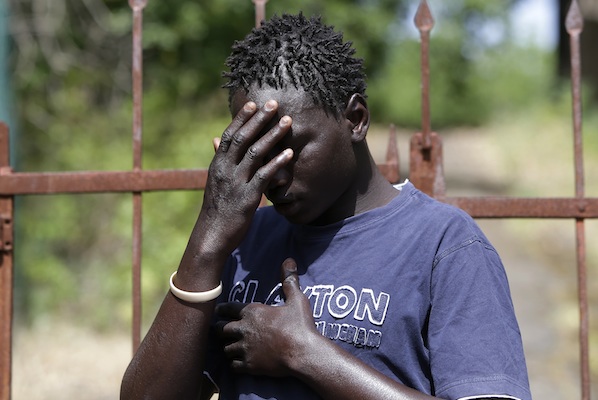 NICOLOSI, Sicily (AP) — Calloused and stained, Baboucar Lowe's hands tell the story of a difficult life, one that nearly ended at 17 when the rubber dinghy he was on deflated within sight of a rescue ship, drowning dozens of migrants trying to reach Europe.

They also bear the sign of survival: A number drawn on his dark skin marks him as one of 91 people pulled to safety aboard a Maltese freighter as a crew member captured the panicked rescue on video.

Speaking to the Associated Press a day after arriving in Italy, Baboucar recounted the moment when more than 100 people aboard the deflating dinghy tried to clamber up ropes onto the ship and dozens were swallowed up by the sea.

According to Baboucar, the dinghy left Libya with 137 people on board. Only 91 were rescued and five bodies were recovered. The other 41, including the captain, presumably drowned.

Baboucar couldn't swim, but he stayed in the dinghy when sailors lowered ropes to stop the rubber boat from drifting away.

Perhaps this caution saved his life. As others rushed forward, some were crushed and others fell into the sea, desperately trying to reach life vests and rings that had been thrown from the rescue ship.

"Some people rose but not me. I waited my turn," he said. "It was very hard. I saw people were dying."

When he finally made it onto the cargo ship Zeran, dozens were missing, all of them teenage boys like him who had left West Africa in the hope of making it to a better life in Europe.

Their plight has spurred the European Union, and now the U.N. Security Council, to respond: A draft resolution expected to be circulated in the coming days would authorize an EU mission to seize suspected migrant boats on the high seas, in Libyan territorial waters and along its coasts, a council diplomat said in New York.

The draft, expected to be passed before a May 18 meeting of EU foreign ministers, still must be worked on to address the plight of migrants like Baboucar, who are arriving in Italy in record numbers as warm weather and calm seas encourage the crossings.

The teen's fingers speak of work at an early age, his nails still stained with the paint he sprayed on cars in his native Gambia and later in Libya, where he earned $500 to buy a spot on a smuggler's boat.

Baboucar said he left home in search of work to support his mother, who is still in their African homeland and had feared for his safety since his arrival more than a year ago in Libya, a common transit point for Africans trying to cross the Mediterranean.

In Libya, he worked for eight months to save up for his passage, the whole time trying to avoid thieves preying on the migrants.

"Libya was very hard. Sometimes you will work and go out, they take your money," he said.

Many of the vessels that set out for the Italian coast overloaded with people fleeing war and poverty are rickety at best, if not outright unseaworthy. Baboucar said he believed his boat was stable, but that didn't stop it from deflating 25 miles off the Libyan coast.

It would likely have sunk had the freighter not arrived.

"I called my mom in the morning. I told her I'm in Italy now," Baboucar said. "She was happy."

Associated Press writers Krista Larson in Dakar, Senegal, and Cara Anna at the United Nations contributed to this report.