Putin Takes Swipe at US in Victory Day Speech 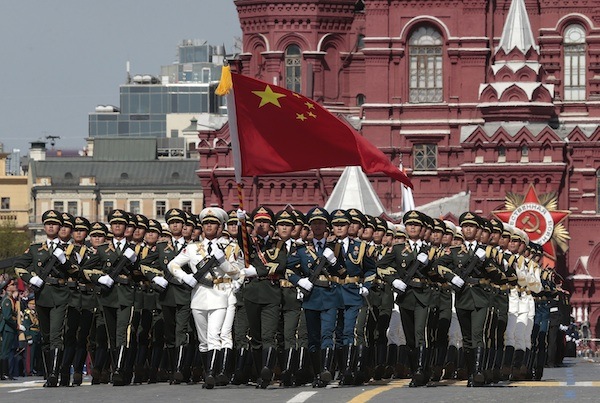 MOSCOW (AP) — Russia showed off new machines of war, including a highly sophisticated tank, on Saturday in the annual Victory Day military parade through Red Square that marks the surrender of Nazi Germany and the Red Army's key role in the defeat.

The Armata tank drew a round of strong applause as it rumbled through the square, part of a long convoy that ranged from the World War II era to the most modern. Also on view for the first time at the parade was the RS-24 Yars ICBM launcher along with several new, smaller vehicles.

In his speech to the assembled troops and veterans, President Vladimir Putin said that the carnage of the war underlined the importance of international cooperation, but "in the past decades we have seen attempts to create a unipolar world." That phrase is often used by Russia to criticize the United States' purported aim to dominate world affairs.

Victory Day is Russia's most important secular holiday, both commemorating the Soviet Union's huge suffering in the war and highlighting Russia's portrayal of itself as a force for peace and security. This year's parade, on the 70th anniversary of the surrender, was the biggest military parade since the Soviet Union's collapse.

In all, about 200 pieces of military hardware and 16,500 troops took part in the parade, which concluded with a flyover of military aircraft. One group of warplanes flew in a tight formation depicting the number "70."

The Armata tank that was one of the highlights of the parade is regarded by some military analysts as surpassing Western tanks. It is the first to have an internal armored capsule surrounding its three-man crew and a remotely controlled turret with an automatic loading system.

Later Saturday, an estimated 300,000 people walked through central Moscow to Red Square, holding portraits of relatives who fought in the war. Putin joined them near Red Square, with a photo of his naval veteran father.

The observances were shadowed by the near-complete absence of European leaders from the ceremony. German Chancellor Angela Merkel is to come to Moscow on Sunday, a visit that will include recognition of the Red Army's sacrifices.

The cold shoulder that European leaders turned toward Victory Day underlines the tensions between Russia and the West over the Ukraine crisis. As Western sanctions on Russia over its actions in Ukraine continue to bite, Russia has increasingly appeared to pivot away from Europe and focus more on developing relations with China.

Chinese President Xi Jinping was the most prominent world leader to attend the Victory Day parade and Putin took special note in his speech of China's role in the war, saying that like the Soviet Union "it lost many, many millions of people."

An air of grievance mixes with the annual commemoration of the Nazi defeat, with Russians frequently complaining that the West undervalues the Red Army's role and even tries to "rewrite history."

Egyptian President Abdel-Fattah el-Sissi, who met with Putin after the parade, echoed that strain. "No one can deny the role that Russia, the Soviet Union, played in the fight with Nazism and history will never forget," he said.

For veterans of the war, in which the USSR is estimated to have lost 26 million people including 8 million soldiers, the parade was an intensely emotional experience.

"When we fought, we had a couple of automatic pistols and a rifle — now look at all the amazing military equipment we've got," said 92-year-old Valentina Schulgina, who fought in the Battle of Stalingrad that is regarded by some as the bloodiest battle in history.

Other prominent figures at the parade included Alexander Zaldostanov, the leather-clad leader of the nationalist motorcycle club Night Wolves, with whom Putin has ridden.

"There are three things to say after the parade today: The enemy will be destroyed; victory will be ours; Russia forward," said Zaldostanov, known as The Surgeon.

Kate de Pury in Moscow contributed to this report.