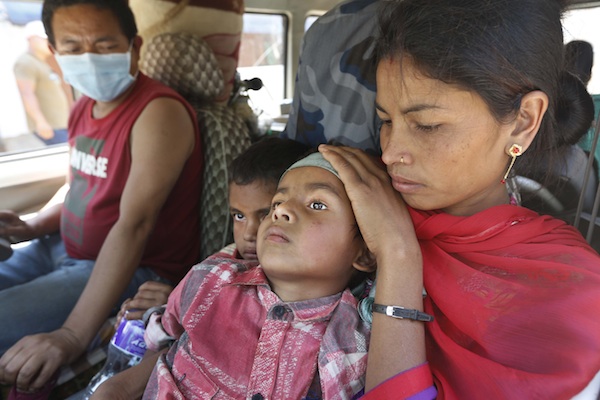 PAUWATHOK, Nepal (AP) — At the entrance of this destroyed mountain village stands a wooden sign cobbled together from the debris of homes flattened by Nepal's devastating earthquake. Its message: "WE NEED HELP. PLEASE HELP."

A steep winding road leads up to the ruins of the small village of Pauwathok, perched on a ridge about 1,100 meters (3,600 feet) above sea level. It's just 50 kilometers (30 miles) east of Kathmandu, Nepal's capital. But villagers say not one government official, not one soldier has visited since the massive quake struck a week ago, underscoring just how unprepared and overwhelmed Nepal's government has been.

The trucks did not stop.

"Are we invisible to you?!" a voice among the crowd screamed as the trucks rode slowly up a hill and out of sight.

One week after the strongest tremor to hit impoverished Nepal in eight decades, aid has been slow in reaching those who need it most. In many places it has not come at all.

U.N. humanitarian officials said Saturday that they were increasingly worried about the spread of disease. They said more helicopters were needed to reach isolated mountain villages like Pauwathok, which were hard to access even before the quake.

The true extent of the damage from the magnitude-7.8 earthquake is still unknown as reports keep filtering in from remote areas, some of which remain entirely cut off. The U.N. says the quake affected 8.1 million people — more than a quarter of Nepal's 28 million people.

The government said Sunday that the quake had killed 7,040 people. Laxi Dhakal, a Home Ministry official, said hopes of finding survivors had faded dramatically. "Unless they were caught in an air pocket, there is not much possibility," he said.

Nepal has been shaken by more than 70 aftershocks following the April 25 quake, and its people remain on edge. One brief aftershock Saturday afternoon shook Pauwathok's only paved road, triggering screams from residents who began to run, then stopped when the tremor eased.

The small village is located in the district of Sindupalchok, where more deaths have been recorded than anywhere else in Nepal — 2,560, compared to 1,622 in Kathmandu. The U.N. says up to 90 percent of the houses in Sindupalchok have been destroyed.

Rajaram Giri said he was sitting under a large tree when the big quake hit. Everything was immediately engulfed in clouds of red dust. When it cleared, Giri saw only ruins.

Only a handful of the village's roughly 80 homes remain habitable. Mostly made of brick and mud and sticks, they were either completely leveled or damaged beyond repair. Some families now sleep under makeshift shelters of debris that they constructed from their own ruined homes — torn roofs and boards, whatever was left.

Others sleep under tarpaulins — obtained only after residents sat in the middle of the road Friday and blocked an aid convoy that eventually relinquished 30 of them, said Giri, who took one for his family. "We only have the clothes on our backs. The rest has been buried under the rubble," he said.

Volunteers have begun stepping into the void. Late Saturday, Pauwathok's appeal for help was finally answered.

A truck full of rice, noodles and medical supplies pulled up. Everyone crowded round.

The truck had been organized by a teacher who went for help to Kathmandu, where he collected donations from charities and friends.

Six other civilians, several of whom worked with street kids in Kathmandu, also came to deliver medical aid Saturday.

They dressed the wound of an elderly lady, Tilamaya Bharti, who had lost part of a finger when a stone crushed it during the tremor. They also gave Bharti painkillers — the first she'd had since doctors in a nearby town conducted a hasty amputation last week and sent her away with nothing to ease the pain.

While the situation in Pauwathok is grave, some remote parts of Nepal have suffered far more.

David O'Neill of U.K. International Search and Rescue said a team from his group had driven as far as it could, then walked for hours into six remote villages to assess them. The team reported that the villages had been so badly hit, 80 percent of their inhabitants had died.

"Everything has been flattened," O'Neill said. The people there apparently died not in the original quake, but in a major aftershock the next day, he said.

O'Neill spoke in Chautara, a destroyed town in Sindhupalchok. His team had hoped to reach the remote areas by helicopter, but none were available, so they were returning to Kathmandu.

The U.N. says there is a great need for more helicopters to reach remote areas. They also say they are confronting huge challenges not just in getting aide out, but getting it in.

Jamie McGoldrick, the U.N. resident coordinator for Nepal, said the problem was that "the bureaucracy of processing has overwhelmed all the systems that are in place."

"I think they're working on peacetime systems when they need to be working" in an emergency mode to deal with the crisis, he said. "I know that some major donors are frustrated about their inability to get material in and out to affected areas."

"The earthquake has caused unimaginable destruction," said Rownak Khan, a U.N. Children's Fund senior official in Nepal. "Hospitals are overflowing, water is scarce, bodies are still buried under the rubble and people are still sleeping in the open. This is a perfect breeding ground for disease."

"We have a small window of time to put in place measures that will keep earthquake-affected children safe from infectious disease outbreaks — a danger that would be exacerbated by the wet and muddy conditions brought on with the rains," Khan said.

In Jalkeni, a village not far from Pauwathok, the road is lined with mounds of broken wood and stone, the remains of destroyed homes.

On top of one mound sat a woman cradling a young girl. The mound — surrounded by a pile of dusty rocks, a broken TV and shredded clothes — used to be Sunita Shrestha's two-story home.

"No one has come to help us yet," said Shrestha, as the sun beat down. "I don't know if they ever will."