Teen Killed By Police Outside of Ferguson, Mo. 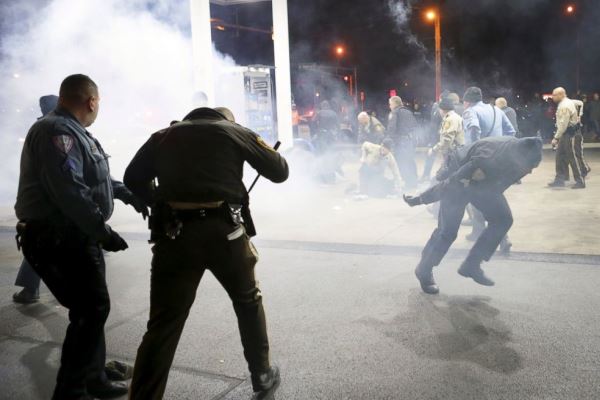 Police try to control a crowd, Dec. 24, 2014, on the lot of a gas station following a shooting in Berkeley, Mo. David Carson/St. Louis Post-Dispatch/AP Photo

BERKELEY, Mo. (AP) — The mayor of the St. Louis suburb of Berkeley called for calm Wednesday after a white police officer killed a black 18-year-old who police said pointed a gun at him. The shooting reignited tensions that have lingered since the death of Michael Brown in neighboring Ferguson.

St. Louis County Police Chief Jon Belmar said the officer was questioning two men — one later identified as 18-year-old Antonio Martin — late Tuesday about a theft at a Berkeley convenience store when Martin pulled a 9mm handgun on the officer.

The officer stumbled backward but fired three shots, one of which struck Martin, Belmar said. No shots came from Martin's loaded gun, the chief said.

Martin died at the scene, though Belmar declined to specify where the fatal bullet hit Martin.

Berkeley is near Ferguson, Missouri, where white police officer Darren Wilson shot and killed Michael Brown, an unarmed, black 18-year-old, on Aug. 9, sparking weeks of sometimes violent demonstrations. A grand jury's decision to not charge Wilson last month in the shooting has spurred a nationwide movement to protest police brutality.

The 34-year-old, white Berkeley police officer, a six-year veteran of the police force in the 25,000-resident suburb, is on administrative leave pending an investigation, Belmar said. St. Louis County police and the city of Berkeley are investigating, Berkeley Mayor Theodore Hoskins said.

The officer wasn't wearing his body camera, and his police cruiser's dashboard camera was not activated because the car's emergency lights were not on, Belmar said.

Police released surveillance video from the parking lot outside the store. The nearly two-minute clip shows two young men leaving the store as a patrol car rolls up, and the officer gets out and speaks with them. About 90 seconds later, the video appears to show one of the men raising his arm, though what he is holding is difficult to see because they were several feet from the camera. Belmar said it was a 9mm handgun — loaded with one round in the chamber and five more in the magazine.

Police were searching for the other man, who fled on foot.

Martin's relatives were not immediately available for comment Wednesday. The address listed for Martin turned out to be a vacant, boarded-up home, and a neighbor told The Associated Press that the family had moved out some time ago. He said he wasn't sure where they moved.

It was the third fatal shooting of a black suspect by a white police officer in the St. Louis area since Brown was killed. Kajieme Powell, 25, was killed on Aug. 19 after approaching St. Louis officers with a knife. Vonderrit Myers, 18, was fatally shot on Oct. 8 after allegedly shooting at a St. Louis officer.

Each shooting has been met by protests, and a crowd quickly gathered late Tuesday in Berkeley. The demonstration involving about 300 people turned violent.

Belmar said three explosive devices, perhaps fireworks, were tossed near gas pumps, and some protesters threw rocks and bricks. One officer hit by a brick was treated for facial cuts, and another was treated for a leg injury sustained as he retreated from an explosive.

"I understand police officers have a job and have an obligation to go home to their families at the end of the night," said 36-year-old Orlando Brown, one of the protesters. "But do you have to treat every situation with lethal force? ... It's not a racial issue, or black or white. It's wrong or right."

Brown said he was pepper-sprayed during the protest and that his friend was among those arrested.

Hoskins said it is unfair for protesters to compare the Berkeley shooting to the Michael Brown case, noting there was no video of the fatal encounter in Ferguson. Ferguson also was criticized for having only three black officers on its 53-member force. Seventeen or 18 of Berkeley's 31 officers are black, as is the police chief and the city's top elected officials, said Hoskins, who is black.

Hoskins' news conference was interrupted by a pointed exchange with Jason Keith Coleman, a black Baptist minister who insisted the shooting was the latest example of deadly aggression by "trigger-happy" police toward blacks.

"Call it what it is — a police officer has killed another black man and this has got to stop," Coleman shouted at the mayor.

"Everybody don't die the same," Hoskins countered. "Some people die because they initiate it, and at this point, our review suggests police did not initiate it."

Belmar said Martin had a criminal record that included three assault charges and others for armed robbery, armed criminal action and unlawful use of a weapon.

Some protesters questioned why the officer couldn't use pepper spray or a stun gun.

"Frankly, that's unreasonable," Belmar said. "When we had somebody pointing a gun at a police officer, there's not a lot of time."