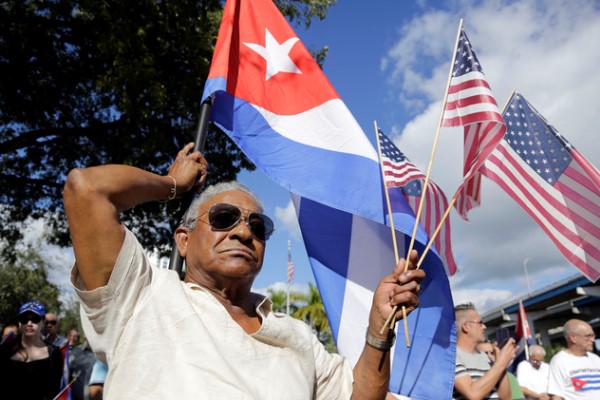 Evilio Ordonez holds Cuban and American flags during a protest against President Barack Obama's plan to normalize relations with Cuba, Saturday, Dec, 20, 2014, in the Little Havana neighborhood of Miami. The last three members of the "Cuban Five" spy ring were freed this week in a sweeping deal that included the release of American contractor Alan Gross and a Cuban who had spied for the U.S. (AP Photo/Lynne Sladky)


HAVANA (AP) — The restoration of diplomatic ties between Cuba and the United States has unleashed expectations of even more momentous changes on an island that often seems frozen in a past of classic cars and crumbling Art Deco buildings.

On the first full day after the surprise announcement Thursday, many Cubans expressed hope that it will mean greater access to jobs and the creature comforts taken for granted elsewhere, and lift a struggling socialist economy where staples like meat, cooking oil and toilet paper are often hard to come by.

That yearning, however, was tempered with anxiety. Some fear a cultural onslaught, or that crime and drugs, both rare in Cuba, will become common along with visitors from the United States. There is also concern that the country will become just another Caribbean destination.

"There are things that shouldn't get lost, that have gone very well here even though Cubans complain," said Nayda Martinez, a 52-year-old chemical engineer in Havana.

"I don't want the system, the country or the regime, whatever you want to call it, to change," Martinez said. "What the people want is to live better."

That mix of optimism and concern was a common refrain Thursday among Cubans trying to digest the implications of such a seismic shift between the two Cold War rivals after more than half a century of bad blood.

Trade with the U.S. will help the country develop, said 55-year-old homemaker Maria Betancourt, but she worried it would bring another kind of isolation.

"I wouldn't want to lose that uniquely Cuban solidarity, or for this to become a more consumerist or individualist society," she said.

Cuba is a place of contrasts. It matches the most developed nations in education and health indicators such as infant mortality. It has one of the lowest crime rates in the Western Hemisphere and some of the best-preserved habitat in the Caribbean, in part because of the lack of development.

But the majority of islanders still work government jobs that pay just $20 a month on average. Internet access is scarce, slow and expensive. Nearly all media is controlled by the state. The Communist Party is the only sanctioned political party, and that is not open to debate. Complaining about a pothole on your street is OK, but openly protesting the government can still land you in jail.

Cubans have learned to navigate their heavy handed political system and figured out how to survive amid the scarcity, long lines and a chronic housing crunch that forces families to pack three generations or more under one roof. Many are eager for change, but no one yet knows what the diplomatic opening will bring.

"Life here is so tough that if it keeps getting worse, there will be even more problems," said Jose Marcos, a 35-year-old shop employee.

While people cheered Wednesday when they learned that three Cuban agents held in the United States had been sent home as part of a deal that also released American Alan Gross after five years in prison, Havana was quiet on Thursday. Cubans went about their daily routines, with bicycle taxi drivers pedaling the streets looking for fares and fruit vendors calling out to passers-by. There was no immediate word of plans for any official celebration like the welcome home party in 2000 for Elian Gonzalez after a yearlong custody battle in Miami.

Journalists from around the world were hurrying to get into Cuba, hoping to secure accreditation from a government that decides who is allowed to report from a country that many believe is at a turning point.

In announcing that the U.S. and Cuba would resume diplomatic relations for the first time since 1961, President Barack Obama said he still has concerns about human rights, democracy and freedom of expression on the island. President Raul Castro said he still wants an end to the trade embargo that has choked off commerce to the island and has kept generations of Americans from being able to visit.

Last year, Cuba began allowing its citizens to travel abroad without first getting permission from the government. Many now have access to consumer goods like smartphones and flat screen TVs from overseas. Not only is that likely to expand, but remittances from abroad could surge, helping people to start more businesses and repair crumbling homes.

Castro has introduced economic reforms, letting hundreds of thousands of people run small private businesses and hire employees, and buy and sell their homes for the first time since the early days of the 1959 revolution. He's allowed the sale of used cars, though the famous classic Chevys and Cadillacs, often kept road-worthy with makeshift parts, are still a delight to tourists.

One way the society may change is in its views of the United States. While many Cuban have family in the U.S and feel warmly toward Americans, they have grown up thinking of Washington as the enemy and many blame US policy for Cuba's problems. Now, they will have to get used to their country and their giant capitalist neighbor doing normal business.

In addition to increased trade, there likely will be even greater cooperation on shared interests such as counter-narcotics and the environment as occurs between the U.S. and most other countries, even communist ones, said Peter Kornbluh, a fellow at the National Security Archive in Washington.

Cubans may have to get used to the notion that they are not at war with the United States anymore, said Kornbluh, co-author of "Back Channel to Cuba: The Hidden History of Negotiations between Washington and Havana."

"A society that has lived in the historic dark shadow of the colossus of the north is now feeling some sunlight," he said. "The lifting of the general state of siege mentality that normal relations will bring is ultra-important."