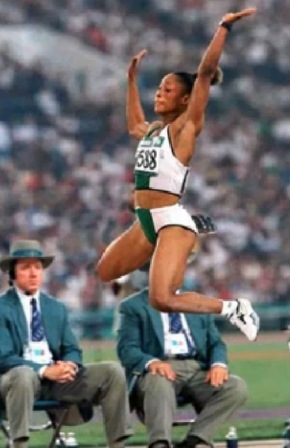 (CNN) -- It's been 16 years since Chioma Ajunwa leaped into Olympic stardom but the retired long jumper is still a national hero in Nigeria.

Her moment of glory came on Friday August 2 1996: Ajunwa sprint down the long jump runway and after a few meters she took off. When she landed in the sand pit a couple of seconds later, she had already catapulted herself once and for all into the record books.

Ajunwa's amazing first round leap of 7.12 meters won her the women's long jump event at the Atlanta Olympic Games. With her victory, the diminutive athlete became Nigeria's first and only individual Olympic gold medalist to this day as well as the first African woman to claim the top spot in a field event.

Today, 42-year-old Ajunwa is proud of her Olympic feat, though at the time, she says, she didn't understand what her achievement meant.

"I never knew that Olympics was just a big competition like that," she says. "Actually it was when I came back to Nigeria, when I saw the crowd, I was like 'what is going on there?'"

Ajunwa had been a top performer from the star of her versatile athletic career. She was a track and field start at the African championships between 1989 and 1991 and she even played football for Nigeria in the 1991 World Cup women's tournament.

Yet, Ajunwa's career took an ugly turn in 1992 when she failed to pass a drug test -- she was eventually banned for four years from competing.

To this day, Ajunwa, who is also a member of the police force, maintains her innocence. "I never one day go to the chemist to buy something to take to enhance my performance," she says.

She says ultimately, she was a victim of her own culture.

"Here in Nigeria, most of the chemist people, even the doctors, gave to athletes maybe your sick, maybe you are having a kind of pain, have banned substance in it," she says.

But after four long years, Ajunwa, who says she never even trained for long jump during her suspension, made history with her gold-winning comeback in Atlanta.

Now she uses her remarkable story to help other Nigerian athletes by holding drug awareness campaigns inside her country.

She has set up the Chioma Ajunwa Foundation to educate sports men and women in Nigeria on the dangers of using banned and illegal substances -- a struggle she had to overcome after her 1992 suspension.

"I don't want them to go through what I have gone through," she says. "I want to let them know that the implication of taking drugs -- buying things in supermarket, buying things in the grocery shop, you know, is very, very dangerous. And if intentionally, they buy anything that they know is a banned substance, eventually they are being caught, that is the end of it."

"I do not want them to pass through this, so that is why I took it upon myself, to come and start educating them, going from one competition venue to another, to tell them that look, it's time you know what you are doing, because if you are caught, that's it."

Ajunwa also mentors young Nigerian athletes for a better future in competitive sport. She says she doesn't like being the only individual gold medalist from her country and wants to help change that.

"Since I won the Olympics, it is 16 years today, since then no other gold -- that is to tell us actually that we are not doing well and we really need to do something," she says. "I'm not happy about that and that is why I need to come up with my foundation."

Jessica Ellis contributed to this report.