US and Five Arab Allies Strike Islamic State in Syria 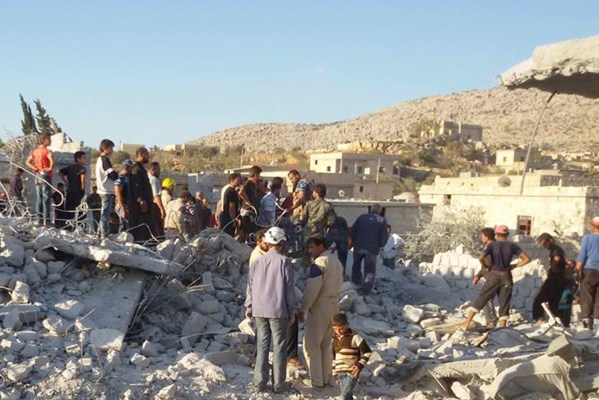 PHOTO: Provided by an anti-Bashar Assad activist group Edlib News Network (ENN), and authenticated based on its contents and other AP reporting, the photo shows Syrian citizens checking a damaged house that they say was targeted by the coalition airstrikes, in the village of Kfar Derian, a base for the al-Qaida-linked Nusra Front, a rival of the Islamic State group, between the northern province of Aleppo and Idlib, Syria, Tuesday Sept. 23, 2014. Syria said Tuesday that Washington informed President Bashar Assad's government of imminent U.S. airstrikes against the Islamic State group, hours before an American-led military coalition pounded the extremists' strongholds across northern and eastern Syria. (AP Photo/Edlib News Network ENN)

WASHINGTON (AP) — The U.S. and Arab allies launched what leaders declared would be a long and sustained military assault against Islamic State strongholds in Syria and Iraq, and the U.S. simultaneously targeted an al-Qaida cell said to be plotting imminent attacks on American and other Western interests, the Pentagon said Tuesday.

Hours after the barrage of airstrikes began, Lt. Gen. William Mayville said the attacks took out key Islamic State training camps and facilities. But he said it was too early to tell if they were able to disrupt a terrorist attack being planned by al-Qaida militants, known as the Khorasan Group. He said the group was "nearing the execution phase" of an attack against Europe or the U.S.

President Barack Obama said that Arab support for the airstrikes "makes it clear to the world this is not America's fight alone."

"We're going to do what's necessary to take the fight to this terrorist group, for the security of the country and the regime and for the entire world," Obama said as he left Washington for meetings of the U.N. General Assembly in New York.

Army Gen. Martin Dempsey, the top American military official, said the U.S. and its Arab allies achieved their aim of showing the extremists that their attacks will not go unanswered.

Gen. Mayville, director of operations for the Joint Chiefs of Staff, said at the Pentagon that the U.S. carried out the vast majority of the strikes in an operation against the Islamic State group that he said would continue and likely last "in terms of years." But he declined to provide details on what the Arab nations did. He said the strikes included Islamic State militants' financial centers in order to disrupt the well-funded group's activities.

In Syria, activists said the trikes hit targets in and around the city of Raqqa and the province with the same name. Raqqa is the Islamic State group's self-declared capital in Syria. Rami Abdurrahman, who heads the Britain-based Syrian Observatory for Human Rights, told The Associated Press, "There is confirmed information that there are casualties among Islamic State group members."

The strikes weren't coordinated with the government of Syrian President Bashar Assad, Mayville said, but Syrian and U.S. officials said that the U.S. informed Syria's envoy to the U.N. ahead of time.

Mayville said the Syrian government did not interfere with the operation. He said the strikes did not specifically target Islamic State group leaders, and that he was unaware of any civilian casualties.

Apparently trying to position his government on the side of the airstrikes, Assad said Tuesday that he supported any international effort against terrorism. He spoke during a meeting with Faleh al-Fayadh, an envoy of Iraq's prime minister. 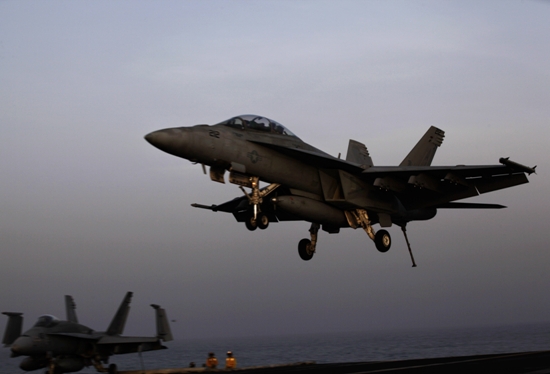 PHOTO: In this Aug. 10, 2014 photo, an aircraft lands after missions targeting the Islamic State group in Iraq from the deck of the U.S. Navy aircraft carrier USS George H.W. Bush in the Persian Gulf. Combined U.S.-Arab airstrikes at the heart of the Islamic State group's military strongholds in Syria achieved their strategic aim of showing the extremists that their savage attacks will not go unanswered, the top American military officer said Tuesday, Sept. 23, 2014. (AP Photo/Hasan Jamali)

American warplanes also carried out eight airstrikes to disrupt what the military described as "imminent attack plotting against the United States and Western interests" by the shadowy Khorosan Group, a network of al-Qaida veterans working with the Yemeni branch of al-Qaida, known as Al-Qaida in the Arabian Peninsula, to get foreign fighters with Western passports and explosives to target U.S. aviation.

Obama said the U.S. was "proud to stand shoulder-to-shoulder" with Arab partners, and he called the roll: Saudi Arabia, the United Arab Emirates, Jordan, Bahrain and Qatar. All but Qatar actually launched airstrikes. Qatar played a supporting role.

Dempsey called the strikes an unprecedented coalition with Arab states and said the partnering had set the stage for a broader international campaign against the extremists.

"We wanted to make sure that ISIL knew they have no safe haven, and we certainly achieved that," Dempsey told reporters as he flew to Washington after a weeklong trip to Europe. ISIL is an alternate name for the Islamic State group whose fighters swept across much of Iraq this summer.

Dempsey said the five Arab nations' agreement to join in the airstrikes came together quickly. "Once we had one of them on board, the others followed quickly thereafter," he said, adding that the partnership came together over the past three days.

Secretary of State John Kerry, speaking in New York at a counterterrorism forum, said Turkey, too, has joined the coalition and "will be very engaged on the front lines of this effort."

The president got swift bipartisan backing from Congress. Republican House Speaker John Boehner called the airstrikes "just one step in what must be a larger effort to destroy and defeat" the Islamic State group. Sen. Carl Levin, the Michigan Democrat who chairs the Senate Armed Services Committee, said the Arab partners' involvement was "especially significant."

Dempsey said the timing was influenced by a concern that word of strikes in eastern Syria could prompt the Khorosan Group to disperse.

Central Command said the bombing mission against that group was undertaken solely by U.S. aircraft and took place west of the Syrian city of Aleppo. It said targets included training camps, an explosives and munitions production facility, a communication building and command and control facilities.

The airstrikes were part of the expanded military campaign that Obama authorized nearly two weeks ago in order to disrupt and destroy the Islamic State militants, who have slaughtered thousands of people, beheaded Westerners — including two American journalists — and captured large swaths of Syria and northern and western Iraq.

A key ally of Assad, Russia's foreign ministry warned Tuesday that what it called "unilateral" air strikes would destabilize the region. "The fight against terrorists in the Middle East and northern Africa requires coordinated efforts of the entire global community under the auspices of the U.N.," the foreign ministry said in a statement.

In New York for the U.N. meetings, Iranian President Hassan Rouhani said that Iran condemns the Islamic State group and stands ready to help fight terrorism. But he said the U.S. policy is confused because it simultaneously opposes the militants while also trying to undermine the government of Syria's Assad.

Dempsey said Arab participation needs to extend beyond direct military roles to assisting in an international effort to undercut finances, recruiting and ideological support for the Islamic State group.

"What we're talking about now is the beginning of an air campaign," he said, adding that it must lead to what he called "the other air campaign" — an effort to fill public airwaves across the Muslim world with arguments for why the extremists must be defeated.

The Pentagon released photos and video showing planes taking off and missiles being launched but was not allowing journalists access to the ships and bases involved in the operation.

The U.S. military has been launching targeted airstrikes in Iraq since August, focusing specifically on attacks to protect U.S. interests and personnel, assist Iraqi refugees and secure critical infrastructure. Last week, as part of the newly expanded campaign, the U.S. began going after militant targets across Iraq, including enemy fighters, outposts, equipment and weapons.

To date, U.S. fighter aircraft, bombers and drones have launched about 190 airstrikes within Iraq.

Urged on by the White House and U.S. defense and military officials, Congress passed legislation late last week authorizing the military to arm and train moderate Syrian rebels. Obama signed the bill into law Friday, providing $500 million for the U.S. to train about 5,000 rebels over the next year.