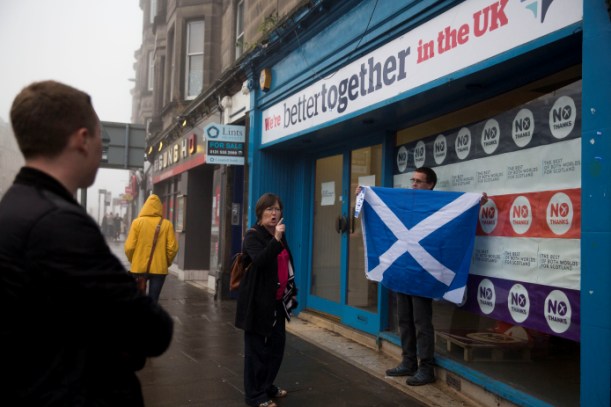 A passerby argues with two Scottish independence referendum Yes supporters one holding a Scottish Saltire flag up and one not seen, outside the "Better Together" No campaign offices in Edinburgh, Scotland, Monday, Sept. 15, 2014. If Scottish voters this week say Yes to independence, not only will they tear up the map of Great Britain, they'll shake the twin pillars of Western Europe's postwar prosperity and security — the European Union and the U.S.-led NATO defense alliance. (AP Photo/Matt Dunham)

LONDON (AP) — How do you divorce after a 300-year union? It's complicated, and there is a deadline.

If Scots vote yes to separation on Thursday, a clock starts ticking down to March 24, 2016 — the independence day declared by the Scottish government.

The British and Scottish administrations have agreed that they will recognize the outcome of the referendum and appoint negotiators to work out the details of separation "in the best interests of the people of Scotland and of the rest of the United Kingdom."

But there is disagreement on many issues, and only 18 months to redraft laws, establish international agreements and work out relationships with international organizations.

Robert Hazell, head of the Constitution Unit at University College London, says that is an "impossible timetable," and estimates it could take up to three years to hammer out the details.

Some of the key issues:

The Yes and No campaigns have very different assessments of Scotland's financial picture, including its share of Britain's national debt and North Sea oil reserves.

The pro-independence Scottish government says Scotland would be entitled to 90 percent of Britain's oil wealth — based on divvying up the two countries' waters — but only liable for about 8 percent of its 1.3 trillion pound ($2.1 trillion) national debt, based on its share of the U.K. population.

The British government disputes this, pointing out that Scotland has higher per capita public-sector spending than England and so is more indebted.

Salmond says that Scotland wants to remain in the United Nations, the European Union and NATO, and he anticipates little difficulty in keeping those seats.

Opponents say re-admission cannot be guaranteed. NATO, in particular, may be perturbed by Salmond's promise to remove nuclear weapons from Scottish territory.

That's not so much a problem for Scotland — nuclear weapons are not a membership requirement — as for Britain, whose entire nuclear arsenal is based aboard submarines at the Faslane naval base in western Scotland.

Adm. Mark Stanhope, a former head of the Royal Navy, has said that moving the weapons "would add a dangerous period of destabilization in our nuclear defense posture at a time when the international picture is clearly deteriorating."

The Royal United Services Institute, a military think-tank, estimates that moving the weapons could cost several billion pounds (dollars) and take until 2028. In the shorter term, Salmond may seek to use the base as a bargaining chip in negotiations with Britain.

Opponents of independence also say the loss of Scotland would sharply reduce Britain's clout on the world stage. It could endanger its place in the G-7 group of wealthy industrialized nations and its seat on the United Nations Security Council, although Salmond says Scotland would support Britain in efforts to keep the security council seat.

The day after an independence vote, the pound sterling will remain Scotland's official currency. The Scottish government wants to keep it in the long term as well — as a key prop of stability amid the uncertainty independence would bring.

British officials and bankers say it's not that simple. Bank of England governor Mark Carney has said that "a currency union is incompatible with sovereignty."

Salmond thinks the British government is bluffing. He says "a common-sense agreement on a common currency" is in everyone's best interest.

Another unknown is whether businesses will pull out of Scotland. Financial institutions including the Royal Bank ofScotland and insurance giant Standard Life have announced plans to transfer some operations south of the border to ensure they remain part of British tax and currency systems.

Salmond says these are administrative measures and that the firms will keep most of their thousands of jobs inScotland — but only time will tell.

At the moment only a blue-and-white billboard informs motorists and train passengers that they have passed from England into Scotland, and border checks will not be set up the day after an independence vote.

Salmond said there is "no danger" of such border formalities, saying Scotland would become part of the passport-free Common Travel Area Britain operates with the Channel Islands and the Republic of Ireland.

He says Scotland, like Britain, will be a member of the EU. But opponents say membership cannot be guaranteed; countries such as Spain, that face strong secessionist movements, may be uneasy about quick recognition.

If Scotland remains outside the EU — or if Britain leaves, as some London politicians wish — there may be no alternative to border checks. Britain could also take umbrage if Scotland adopts much more liberal immigration policies.

Scots will be getting different passports if they opt for independence, even if they don't need them to cross the border. The Scottish government says all British citizens living in Scotland will automatically be considered Scottish citizens, as will Scotland-born Britons who live elsewhere. They will be able to apply for Scottish passports from independence day in 2016, and would be allowed to retain dual Scottish and British nationality.

One thing both sides agree on — Queen Elizabeth II will continue to be the Scottish monarch after independence.

Scotland and England shared a monarch for a century before they united politically in 1707, and the queen remains head of state in Canada, Australia and several other former British colonies.

The queen will keep her Balmoral estate in Scotland, the royal family's traditional summer-vacation destination.

Many other symbols of state are up for grabs. Scotland will likely adopt the Saltire, a blue-and-white flag that already flies alongside the Union Jack over government buildings in Edinburgh.

The red, white and blue British flag combines the emblems of its member regions, including England's red-and-white Cross of St. George and Scotland's blue. A redesign of the iconic banner may be in order.