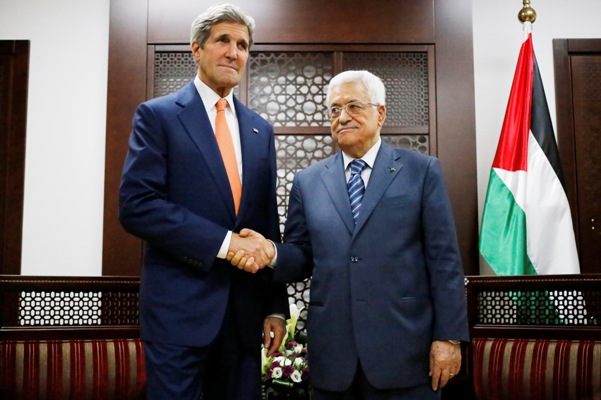 Hamas leader Khaled Meshaal spoke out in Doha Quatar, Wednesday, calling for the opening of Gaza's borders and the end of a more than seven-year-long blockade imposed by Israel and Egypt on the Palestinian strip.

Striking a defiant tone, he said that Gaza is fighting an occupying force and that the Palestinians are "the true owners of the land."

Meshaal says Hamas cannot abandon its terms in a cease-fire agreement, and can accept a humanitarian truce that is supported by a genuine relief program for the besieged Gaza Strip.

Israeli troops battled Hamas militants on Wednesday near a southern Gaza Strip town as the top U.S. diplomat reported progress in efforts to end fighting that has so far killed more than 680 Palestinians and 34 Israelis.

Meanwhile, U.S. Secretary of State John Kerry is in Israel attempting to broker a truce between Israel and Hamas militants. Offering the first glimmer of hope, Kerry said negotiations are making some progress even if an end to more than two weeks of bloodshed is nowhere near.

"We certainly have made steps forward," Kerry said in Jerusalem, where he met for the second time this week with United Nations chief Ban Ki-moon. "There's still work to be done," Kerry said.

He did not offer any specifics about the progress he cited in his third day of talks with Mideast leaders. He flew to Israel on an Air Force jet — one day after the FAA banned commercial flights into Ben-Gurion Airport because of a Hamas rocket attack nearby.

White House deputy national security adviser Tony Blinken said there must be a way forward that does not involve Hamas having the ability to "rain down rockets on Israeli civilians."

"One of the results, one would hope, of a cease-fire would be some form of demilitarization so that this doesn't continue, doesn't repeat itself," Blinken said in an interview with NPR. "That needs to be the end result."

Asked about Blinken's remarks, Kerry said, "All of the issues of Gaza would be on the table."

Palestinian President Mahmoud Abbas said late Tuesday he had discussed with faction leaders, Hamas leader Khaled Mashaal and Islamic Jihad among them, conditions for reaching a cease-fire, including "opening border crossings and ending all forms of aggressions." Prisoner releases, humanitarian aid to Gaza and holding a donors conference for the reconstruction of Gaza were among the topics discussed, Abbas said.

The U.S., Israel and the European Union all consider Hamas a terrorist organization. But the U.N. does not, and Ban said he and Kerry were jointly lobbying officials in the region to push Hamas and Israel to a cease-fire as soon as possible.

"We don't have much time to wait and lose," Ban told reporters before the meeting with Kerry.

Kerry also offered "profound gratitude" to what he described as 30,000 Israelis who lined Jerusalem streets on Wednesday for the funeral procession of Israeli soldier Max Steinberg, a 24-year-old American from the San Fernando Valley of Southern California who was killed in the fighting. "That's a remarkable statement — we're very grateful," Kerry said.

In Ramallah, following a meeting of just over an hour with Abbas, Kerry said the limited progress was gained in the last 24 hours and pledged to continue working on the cease-fire when he returns to Cairo late Wednesday night.

"We're doing this for one simple reason: The people in the Palestinian territories, the people in Israel, are all living under the threat or reality of immediate violence," Kerry told reporters outside Abbas' office. "And this needs to end, for everybody. We need to find a way forward that works. And it's not violence."

Abbas made no public statements during Kerry's visit to Ramallah.

Kerry also planned to meet with Israeli Prime Minister Benjamin Netanyahu on what appeared to be a crucial day in the talks. U.S. officials have downplayed expectations for an immediate, lasting truce between Israel and Hamas, which controls Gaza.

Meanwhile, the Federal Aviation Administration was reassessing its ban on Ben-Gurion — which the State Department said does not apply to military aircraft — by midday Wednesday in Washington. The European Aviation Safety Agency also issued an advisory saying it "strongly recommends" airlines avoid the airport. Israeli officials said the precautionary U.S. step was unnecessary and "gave terror a prize" by reacting to Hamas' threats.

State Department spokeswoman Jen Psaki said, "The FAA is in close touch with Israel (and) continues to monitor and evaluate the situation."

Israel launched a massive air campaign on July 8 to stop relentless Hamas rocket fire into Israel and expanded it last week to a ground war aimed at destroying tunnels the military says Hamas has constructed from Gaza into Israel for attacks against Israelis. More than 630 Palestinians and about 30 Israelis have been killed in the violence. Israel says its troops have killed hundreds of Hamas gunmen, while Gaza officials say the vast majority have been civilians, many of them children.

Israel and the U.S. back an unconditional cease-fire proposal that has been offered by Egypt, which would be followed by talks on a possible new border arrangement for Gaza. Israel and Egypt have severely restricted movement in and out of Gaza since Hamas seized the territory in 2007.

But Hamas has rejected repeated Egyptian truce proposals. The militant group, with backing from its allies Qatar and Turkey, says it wants guarantees on lifting the blockade before halting its fire. In addition to discussions with Egypt officials, including President Abdel-Fattah el-Sissi, Kerry spoke several times Tuesday from Cairo with Turkish Foreign Minister Ahmet Davutoglu and Qatari Foreign Minister Khalid al-Attiya.

Earlier this week, Netanyahu said the international community must hold Hamas accountable for the latest round of violence, saying its refusal to agree to a cease-fire had prevented an earlier end to the fighting. He has long accused Hamas, whose charter calls for the destruction of Israel, of not wanting a two-state solution.

Egypt has also been negotiating with some Hamas officials, but relations between the two sides have been strained since Egypt outlawed the Muslim Brotherhood, which has ties to Hamas, after last year's overthrow of former President Mohammed Morsi.

At least some diplomats also see cease-fire negotiations as an opportunity to revitalize stalled peace talks between Israel and Palestinian authorities that were personally shepherded by Kerry but broke off last April following nearly nine months of frustrated attempts. Kerry has stopped short of advocating a new round of peace talks. Still, he has left the door open for broad negotiations between Israel and Palestinian officials once a cease-fire is in place.