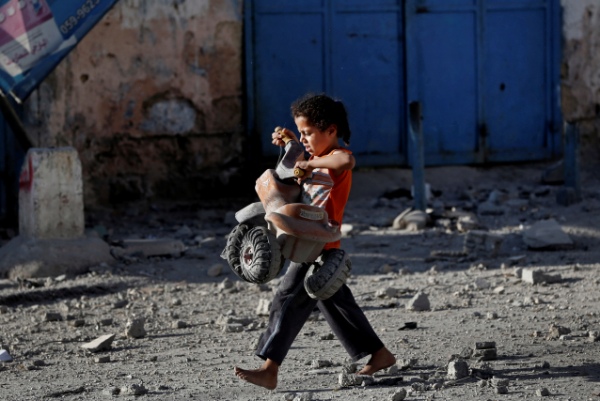 A Palestinian girl walks with a toy that she salvaged from debris of the el-Yazje apartment building which was destroyed following an overnight Israeli missile strike in Gaza City, Thursday, July 17, 2014. The Israeli military says it has struck 37 targets in Gaza ahead of a five-hour humanitarian cease-fire meant to allow civilians to stock up after 10 days of fighting. The Gaza Interior Ministry says four people were killed and that a 75-year-old woman died of wounds from the day before. The Israeli army says Hamas fired 11 rockets at Israel early Thursday. Palestinian health officials say that in total, at least 225 Palestinians have been killed. On the Israeli side, one man was killed since July 8. (AP Photo/Lefteris Pitarakis)

UPDATE: The Israeli military says it has launched a ground offensive in Gaza.

GAZA CITY, Gaza Strip (AP) — Gaza residents rushed to banks, vegetable markets and shops Thursday during a first U.N.-brokered lull in 10 days of Israel-Hamas fighting, but a quick resumption of hostilities after it ended signaled that a permanent truce remains elusive.

Hamas fired 10 rockets at Israel after the end of the temporary truce, while Israel launched two airstrikes at the Gaza Strip, security officials said.

Egypt persisted with diplomatic efforts to bring all sides to the table Thursday, with President Abdel Fattah el-Sissi meeting with Palestinian leader Mahmoud Abbas after Egyptian officials met separately with representatives of Israel and Hamas in Cairo. But the gaps remain wide.

Israel accepted Egypt's call earlier this week to halt all fighting, but Hamas rejected the idea because it first wants to lock in achievements, such as easing the seven-year blockade of Gaza by Israel and Egypt.

During the humanitarian cease-fire, Gaza residents rushed to restock supplies after more than a week of being mostly holed up at home for fear of airstrikes.

"The situation is likely to get worse because there is no clear way out of it," said Moussa Amran, 43, a money changer in central Gaza City.

The city's streets returned to normalcy during the lull, with traffic jams, motorists honking horns and Hamas police directing traffic at busy intersections.

Hundreds lined up outside banks, with people jostling and shouting to get to ATM machines. In an outdoor market, shoppers filled plastic bags with fruit, vegetables and freshly slaughtered chickens.

Abdallah Jaber, 42, seized the opportunity to visit his 87-year-old father, Hosni, in a care facility for the elderly and disabled close to the Israeli border, in an area that has been targeted repeatedly by the Israeli army as a launching area for rockets.

Israel has demanded that the building be evacuated, but director Basman Ashi said such a trip was too risky for his 17 patients, many of them unable to walk.

Jaber said he couldn't reach the center during 10 days of fighting and was worried about his father, who is on a respirator and suffers from dementia. "We would call every hour to get an update on his condition," he said.

In Cairo, Egypt's Foreign Minister Sameh Shukri insisted in an interview with The Associated Press that the cease-fire deal was still alive and expressed frustration that "Palestinian factions" -- a clear reference to Hamas -- had not agreed to it.

Hamas' agreement is crucial to any such truce, but its demand that the blockade be eased significantly is likely to be rejected by Israel and Egypt because it would strengthen the group's hold on Gaza, where it seized power in 2007.

On Wednesday, the No. 2 in Hamas, Moussa Abu Marzouk, presented a list of demands to Egypt, said a senior official in the group who spoke on condition of anonymity because he was not authorized to discuss the negotiations with reporters.

Hamas demands that Gaza's crossings be opened and that all types of goods be allowed into the territory. Israel has allowed consumer goods into Gaza, but has restricted construction material, fearing it would be diverted for military use. Israel has also barred most exports from Gaza, crippling the local economy.

Hamas also wants to be allowed to build a sea port as a gate to the world, with shipments under international monitoring, the Hamas official said.

In addition, Hamas demands the release of 52 activists who had been released by Israel in a 2011 prisoner swap, but were re-arrested in recent months.

A high-level Israeli delegation also visited Cairo for several hours on Wednesday to discuss the terms of a cease-fire, said Egyptian government officials who spoke on the condition of anonymity because they were not authorized to speak to the media.

Meanwhile, Israeli Foreign Minister Avigdor Lieberman dismissed a news report that a truce was to begin early Friday, saying that "as of now, at least, we are not aware of this."

In the lead-up to Thursday's lull, 13 heavily armed Hamas militants tried to sneak into Israel through a tunnel from Gaza, the military said. Israeli aircraft struck the fighters at the mouth of the tunnel some 250 meters (820 feet) inside Israel, near a kibbutz.

Lt. Col. Peter Lerner, a military spokesman, said the military believed at least one militant was killed in the strike and that the remaining fighters appeared to have returned to Gaza through the tunnel.

Footage released by the military showed a number of individuals creeping slowly toward what appeared to be a hole in the ground. A separate shot showed an explosion from an airstrike on the tunnel entrance.

Three people were killed by a tank shell that hit a house in the southern town of Rafah, the Hamas-run police and al-Kidra said.

In the town of Khan Younis, hundreds joined the funeral procession of four members of a family, including two children, who were killed in an air strike the day before. The bodies, wrapped in white shrouds, were carried through the streets.

In Jerusalem, a court indicted a 29-year-old and two 16-year-olds in the death of Mohammed Abu Khdeir, 16. According to the indictment, the suspects went out for a "manhunt" that ended when they "cruelly" killed Abu Khdeir.

The indictment said the suspects carried out the crime in revenge for the deaths of three Israeli teens last month and that they killed Abu Khdeir "solely because he was an Arab." The suspects are also accused of attempting to kidnap a seven-year-old Arab boy a day earlier.

The indictment said Abu Khdeir was strangled, beaten and burned to death while he was unconscious.

The death led to days of clashes between Palestinian protesters and police in east Jerusalem and elicited widespread international condemnation.