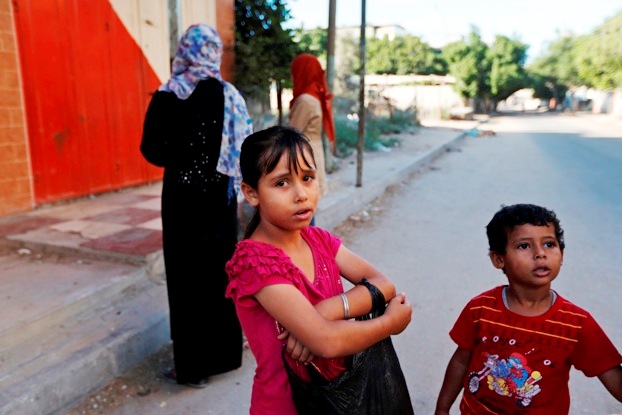 Palestinians flee their homes in the Shajaiyeh neighborhood of Gaza City, after Israel had airdropped leaflets warning people to leave the area, Wednesday, July 16, 2014. Palestinians flee their home in Gaza City, Wednesday, July 16, 2014. Alongside the air strikes, Israel also ordered tens of thousands of residents of the northern town of Beit Lahiya and the Zeitoun and Shijaiyah neighborhoods of Gaza City, all near the border with Israel, to evacuate their homes by 8 a.m. Wednesday. The warnings were delivered in automated phone calls, text messages and leaflets.(AP Photo/Lefteris Pitarakis)GAZA CITY, Gaza Strip (AP) — Israel agreed to a five-hour "humanitarian" pause in its 9-day-old bombardment of Gaza that has killed more than 200 Palestinians, including four boys struck on a beach Wednesday by shells fired from a navy ship.

Israel said it would hold its fire Thursday from 10 a.m. (0700 GMT, 3 a.m. EDT) under a U.N.-brokered plan to allow Palestinians to restock food, water and other necessities. But it vowed to retaliate "firmly and decisively" if Hamas or other militant groups launch attacks on Israel during that time.

Robert Serry, the U.N. special coordinator for the Middle East peace process, had asked Israel to agree to a "unilateral humanitarian pause" so that the supplies can be delivered to Gaza, said U.N. deputy spokesman Farhan Haq. Serry will "urge the parties in Gaza to respect that pause," Haq said.

There was no word on whether there would be a similar lull from Palestinian militants.

Israel previously had halted its fire for six hours Tuesday after Egypt put forward a cease-fire proposal that unraveled. Hamas official Sami Abu Zuhri said Wednesday his group had formally rejected the plan, bemoaning what he called little support from the Arab world.

But Palestinian President Mahmoud Abbas met Wednesday in Cairo with a senior official from Hamas to try to salvage the Egyptian proposal.

In Washington, President Barack Obama said the U.S. supports Egypt's continued efforts to restore the 2012 cease-fire and will use all of its diplomatic resources and relationships to secure a deal to end the violence.

Israel's military said its forces bombed at least 150 targets in Gaza on Wednesday. It did not provide more specifics, but the Gaza Interior Ministry's website said 30 houses, including those of senior Hamas leaders Mahmoud Zahar, Jamila Shanti, Fathi Hamas and Ismail Ashkar, were targeted.

Zahar was a key figure in Hamas' violent takeover of Gaza in 2007, while the other three were members of the Palestinian parliament elected in 2006. Many Hamas leaders have gone into hiding since Israel began its bombardment July 8 in response to rocket attacks from Gaza.

Gaza health official Ashraf al-Kidra said the Palestinian death toll rose to 222, with 1,670 wounded. Only one Israeli has so far died in the conflict — a civilian distributing food to soldiers in southern Israel on Tuesday evening — largely because of the effectiveness of Israel's Iron Dome air defense system in downing incoming rockets.

The four boys, who were cousins aged 9 to 11, were killed on the beach beside a coastal road west of Gaza City, al-Kidra said. Seven others — adults and children — were wounded in the strike, which Palestinian human rights activist Khalil Abu Shamalla and Palestinian health officials said came from an Israeli naval vessel.

Hussam Abadallah, a waiter at the beachside al-Deera hotel, said the strike happened about 4 p.m.

A witness who identified himself only as Abu Ahmed said the boys were scavenging for scrap metal when a first shell hit a nearby shipping container used in the past by Hamas security forces. He said the boys fled but a second rocket "hit all of them."

Abadallah said he saw "white smoke coming from a small room, like a shack, belonging to one of the fishermen not far from the fishing port."

He said he then saw the boys running.

"We started shouting at them, 'Run, run here,' then a shell from the sea landed behind them," Abadallah said.

Some journalists dining at the hotel jumped from the terrace and helped five children bleeding from shrapnel get to safety in the hotel, he added.

"I will never forget these horrible images," he said.

Cellphone video circulated on Facebook showed the small, bloodied bodies in the sand. One dead boy was face down, with his legs at sharp angle.

The Israeli army said in a statement it was "carefully investigating" the matter. It said the target of the naval attack was "Hamas terrorist operatives" and that civilian casualties were "a tragic outcome."

It said the army "has no intention of harming civilians dragged by Hamas into the reality of urban combat."

The boys' uncle, Abdel Kareem Baker, 41, raged at Israel after the attack.

"It's a cold-blooded massacre," he said. "It's a shame who come they didn't identify them as kids with all of the advanced technology they claim they're using."

Israel's security Cabinet approved a call-up of 8,000 additional reservists, according to an Israeli official, also speaking on condition of anonymity because he was not permitted to discuss the matter publicly.

The army said 45,000 reservists have already been summoned — a sign that Israel was ramping up its threat to carry out a ground invasion, although experts have said such an action was highly unlikely.

Abbas met with deputy Hamas chief Moussa Abu Marzouk to discuss the Egyptian initiative. An official with Abbas' Fatah faction told The Associated Press that Abbas and Egypt were trying to get Hamas on board.

Egypt's ambitious cease-fire plan seeks to restore greater authority for Abbas in Gaza and settle rifts between his Palestinian Authority and Hamas, which took control of the seaside territory in 2007, according to a Palestinian official in Cairo. The official spoke on condition of anonymity because he wasn't authorized to release information about the closed-door talks.

Under the proposal, a cease-fire would be followed by talks to resolve the rift between Hamas and Abbas over Gaza, including giving control of the border to Abbas, he said. That would presumably allow a greater opening of the borders, one of Hamas' main demands, along with the easing of border closures and the release of former Hamas prisoners who had been freed by Israel in a 2011 prisoner exchange but were rearrested by Israel last month in the West Bank.

The official, who was in Cairo, said Hamas' main objection was the power-sharing arrangement.

The militant group views a significant easing of the Israeli blockade of Gaza as key to its survival, but does not believe Egypt's current rulers — who deposed a Hamas-friendly government in Cairo last year — can be fair brokers.

Al-Kidra, the Gaza health official, said an airstrike in the Gaza neighborhood of Khan Younis killed four members of the Al-Astal family, including a 6-year-old boy, his 4-year-old sister, and a 70-year-old woman.

In a separate airstrike, a woman and a young girl were killed, al-Kidra said.

Israel told tens of thousands of residents of the northern town of Beit Lahiya and the Zeitoun and Shijaiyah neighborhoods of Gaza City, all near the border with Israel, to evacuate their homes by Wednesday morning. The Israeli military said in automated phone calls, text messages and air-dropped leaflets that large numbers of rockets were launched from these areas and that it planned to bomb these locations.

"Whoever disregards these instructions and fails to evacuate immediately, endangers their own lives, as well as those of their families," the message said.

As a result, hundreds of residents of Zeitoun and Shijaiyah were seen walking in the streets, carrying small bags with belongings.

An Israel shell hit near the building, damaging the second floor, but causing no injuries, he said. Ashi added that his patients have nowhere to go.

Four foreign volunteers — from Britain, the U.S., France and Sweden — have set up camp at the rehabilitation center to deter the military from targeting it.

British volunteer Rina Andolini, 32, said the patients range in age from 12 to over 70 and none can walk or move without assistance. She said there are also 17 Palestinian staff members.

The patients are living in constant fear, intensified by the Israeli tank shelling from across the border, she said.

When asked about the situation at the rehabilitation center, the office of the Israeli military spokesman said its residents "have been asked repeatedly to leave."

"There is a rocket-launching site in the area," the military said, adding that Gaza militants use the center to hide "behind civilians."