Activist Malala in Nigeria: 'Bring Back Our Girls' 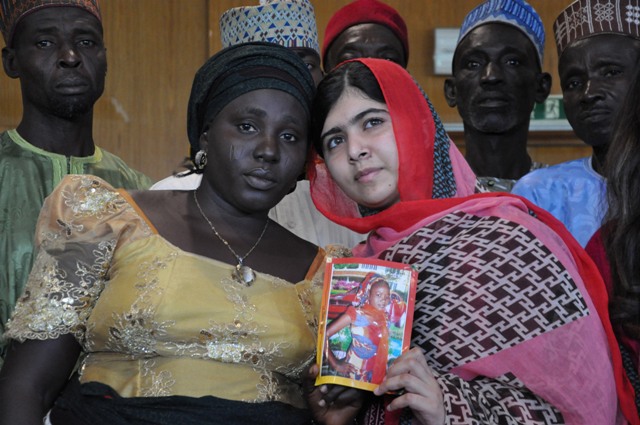 Pakistani activist Malala Yousafzai who survived being shot by the Taliban because she advocated education for girls, holds a picture of kidnapped schoolgirl Sarah Samuel with her mother Rebecca Samuel, during a visit to Abuja, Nigeria, Sunday July 13, 2014. Malala Yousafzai traveled to Abuja in Nigeria to meet the relatives of schoolgirls who were kidnapped by Boko Haram three months ago. (AP Photo/Olamikan Gbemiga)

ABUJA, Nigeria (AP) — Nigeria's president promised Pakistani education activist Malala Yousafzai that he would meet with the parents of some of the 219 schoolgirls held by Islamic extremists for three months, she said Monday.

Malala is celebrating her 17th birthday in Nigeria in an effort to work for the release of the girls from Boko Haram.

"My birthday wish this year is 'Bring Back Our Girls' now and alive," she said, using the social media slogan that has been picked up around the world to demand freedom for the girls kidnapped from a school in the remote northeast Nigerian town of Chibok before dawn on April 15.

Boko Haram attacks continued over the weekend with witnesses blaming them for the bombing of a major bridge on a northeast Nigerian highway that further limits access to its base camps in the Sambisa Forest, where some of the kidnapped girls are believed to be held captive.

Gunmen destroyed most of the bridge on the road between Maiduguri and Biu on Saturday night, making it impossible for vehicles to cross, the spokesman for the Nigerian Vigilante Group, Abbas Gava, told The Associated Press.

Malala, who escaped a Taliban assassination attempt in 2012, met with Nigeria's President Goodluck Jonathan Monday and told reporters afterward that "he promised me that the girls will be returned as soon as possible."

She described an emotional meeting Sunday with some of the parents of the girls.

"I could see tears in their eyes. They were hopeless. But they seem to have this hope in their hearts ... and they were asking that: Is it possible that they could meet the president."

She is hopeful that the meeting, and the release of the girls, will happen "really soon," she said.

Jonathan has not met with any of the parents, though some regularly make the dangerous drive from Chibok to join activists who have held rallies daily in Abuja since April 28.

When the Nigerian activists who started the worldwide movement to #BringBackOurGirls tried to march peacefully to the presidential villa in May, they were blocked by soldiers and police. Jonathan canceled a planned trip to Chibok that same month.

Nigeria's leader has drawn international condemnation for his government's failure to quickly rescue the students, and the girls' parents have begged him to negotiate with Boko Haram.

Boko Haram leader Abubakar Shekau put out a new video Sunday in which he repeated demands that the government release detained insurgents in exchange for the girls' freedom.

"Nigerians are saying 'Bring Back Our Girls,' and we are telling Jonathan to bring back our arrested warriors, our army," he says in the video.

Jonathan so far has refused.

In the three months since the mass abduction, Boko Haram has increased the number and deadliness of its attacks with a two-pronged approach — bombing cities and towns and a scorched-earth strategy in villages, gunning down villagers, looting livestock and burning down huts.

In the new video, Shekau crows over recent victories including two explosions at a fuel depot in Lagos that the government tried to cover up. It would be the first reported bombing by Boko Haram in Lagos — Nigeria's commercial capital, an Atlantic port and probably the continent's most populous city with some 20 million people. It raises fears that the insurgency is spreading further from its stronghold at the opposite end of the country.

At least four people died in the June 25 blasts, including an alleged female suicide bomber, according to Western diplomats who spoke on condition of anonymity because of the sensitivity of the issue.

Nigeria's government, which often plays down insurgent attacks, said there was one explosion caused by a gas cylinder. But the diplomats said there is clear evidence of a car bomb exploding on the crowded road outside the depot, backed up with tankers, and of a person at the entrance gate believed to be a woman wearing a suicide bomb vest.

Hours before, another bomb went off at the biggest shopping mall in Nigeria's capital, Abuja, killing at least 21 people.

"We were the ones that detonated the bomb in Abuja, that corrupt city," Shekau says in the video, which the AP obtained through similar channels used for previous messages.

On Monday, Malala also appealed to the Nigerian government to dedicate more money to education, and to drastically reduce the hundreds of thousands of children who are out of school in the country, not just in the northeast area that is under a state of emergency and where Boko Haram has targeted schools, killing hundreds of students.

The group's nickname means "Western education is sinful." Boko Haram also wants to do away with the constitution and enforce an Islamic state in Nigeria, whose 170 million people are almost equally divided between Christians in the south and Muslims in the north.

"We express our solidarity with you and we are with you, we are standing up with you in your campaign of 'Bring Back Our Girls,' bring back our daughters because I consider these girls as my sisters," Malala told the parents.