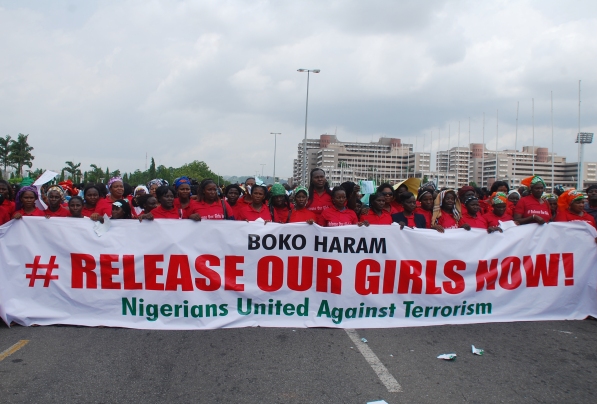 In this Monday, May 26, 2014, photo, the Nigerians United Against Terrorism group attends a demonstration calling on the government to rescue the kidnapped girls of the government secondary school in Chibok, in Abuja, Nigeria. Nigeria's defense chief said Monday that the military has located nearly 300 school girls abducted by Islamic extremists but cannot use force to free them. (AP Photo/Gbenga Olamikan)

MAIDUGURI, Nigeria (AP) — Extremists have abducted 91 more people, including toddlers as young as 3, in weekend attacks on villages in Nigeria, witnesses said Tuesday, providing fresh evidence of the military's failure to curb an Islamic uprising and the government's inability to provide security.

The kidnappings come less than three months after more than 200 schoolgirls were taken in a mass abduction that embarrassed Nigeria's government and military because of their slow response. Those girls are still being held captive.

The most recent victims included 60 girls and women, some of whom were married, and 31 boys, witnesses said.

A local official confirmed the abductions, but security forces denied them.

There was no way to safely and independently confirm the report from Kummabza, 150 kilometers (95 miles) from Maiduguri, capital of Borno state and headquarters of a military state of emergency that has failed to curtail near-daily attacks by Boko Haram fighters.

Vigilante leader Aji Khalil said Tuesday the abductions took place Saturday in an attack that killed four villagers. Khalil lives in Maiduguri but gets reports daily from other vigilante groups that have had some success in repelling Boko Haram with primitive weapons.

A senior councilor from the village's Damboa local government told The Associated Press that abductions had occurred but spoke on condition of anonymity because he was not authorized to give information to reporters. He said the reports came from elderly survivors of the attack who had walked some 25 kilometers (15 miles) to the relative safety of other villages.

An intelligence officer with Nigeria's Department of State Security also said there had been a mass abduction, but he said it occurred in Kummabza and three nearby villages between June 13 and 15, and that no one knows the actual number abducted. He also spoke on the condition of anonymity because he was not authorized to talk to reporters.

There was no way to reconcile the confusion, which also surrounded the first mass abduction in mid-April.

Several prominent Nigerians questioned whether those abductions had taken place, including first lady Patience Jonathan, who claimed the reports were fabricated to discredit her husband's administration.

Last week, a presidential committee investigating the April kidnappings stressed that they did happen and clarified the number of students who have been kidnapped. It said there were 395 students at the school — 119 who escaped during the siege of the school and another 57 who escaped in the first couple of days of their abduction, leaving 219 unaccounted for.

U.S. Rep. Chris Smith met earlier this month with one of the girls who escaped.

"Almost two months later, clearly she was still traumatized — you could hear it in her quivering voice and see it in her eyes. Yet she spoke mostly of her deep concern for her friends and classmates still in captivity and pleaded for their immediate rescue," he said in a statement issued Tuesday.

But Smith, a Republican from New Jersey, also quoted testimony to the House Foreign Relations Committee last week by another former U.S. ambassador, Robin Renee Sanders, who warned that "Nigeria is in the beginning of a long war. ... There is no easy fix."

John Campbell, a former U.S. ambassador to Nigeria who is an analyst with the Council of Foreign Relations, predicted that kidnappings would continue because, for Boko Haram, the strategy has been "remarkably successful: It focuses attention on the shortcomings of the Nigerian government." 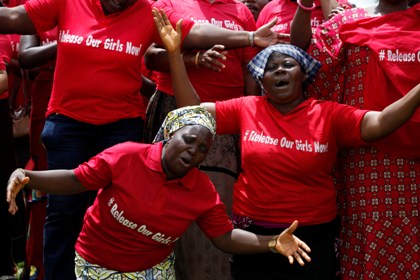 PHOTO: In this file photo taken on Tuesday, May 27, 2014, Women attend a prayer meeting calling on the government to rescue the kidnapped girls of the government secondary school in Chibok, in Abuja, Nigeria. Extremists have abducted 91 more people, including toddlers as young as 3, in weekend attacks on villages in Nigeria, witnesses said Tuesday, June 24, 2014, providing fresh evidence of the military’s failure to curb an Islamic uprising and the government’s inability to provide security. The victims included 60 girls and women, some of whom were married, and 31 boys, witnesses said. A local official confirmed the abductions, but security forces denied them. Nigeria’s government and military have been internationally embarrassed by their slow response to the abductions of more than 200 schoolgirls who were kidnapped April 15 and remain captive. (AP Photo/Sunday Alamba,File)

The latest abductions were the subject of speculation at a daily rally Tuesday in the capital of Abuja, an ongoing protest to keep attention on the prolonged trauma of the girls from the village of Chibok. Various speakers worried about the fate of the new victims.

The rally to "Bring Back Our Girls" is organized by a group of women from all tribes, religions and ages — an unusual display of unity in a country divided about equally between the mainly Muslim north and predominantly Christian south.

Boko Haram — the nickname means "Western education is sinful" — wants to enforce Islamic law throughout the country of 170 million.

The new kidnappings also show that international efforts to coordinate security along Nigeria's border with Cameroon have stalled, said Jacob Zenn, author of a book about Boko Haram. Sightings of groups of girls assumed to be from Chibok have come from neighboring Chad, Niger and Cameroon, he said.

A strategy to rescue the girls is at an impasse. Nigeria's military has said it knows where they are but fears their abductors would kill them if military action is taken.

Boko Haram has been demanding the release of detained members, but President Goodluck Jonathan has said he will not consider a swap.

Zenn said the longer the situation drags on, "Boko Haram is more likely to decide to use the girls for forced marriages instead of as bargaining chips."

This year, the Boko Haram insurgents have embarked on a two-pronged strategy — bombing in cities and a scorched-earth policy in rural areas where they are devastating villages.

On Monday, an explosion at a medical college in the northern city of Kano killed at least eight people and wounded 12, police said. It was the third bomb blast in four months in Kano, Nigeria's second-largest city.

The group evolved five years ago from an Islamic sect that preached against the corruption that keeps most Nigerians impoverished despite their country's oil wealth. Those efforts expanded into a violent movement that initially targeted government and security officials, Christians and Muslim critics but now attacks indiscriminately.