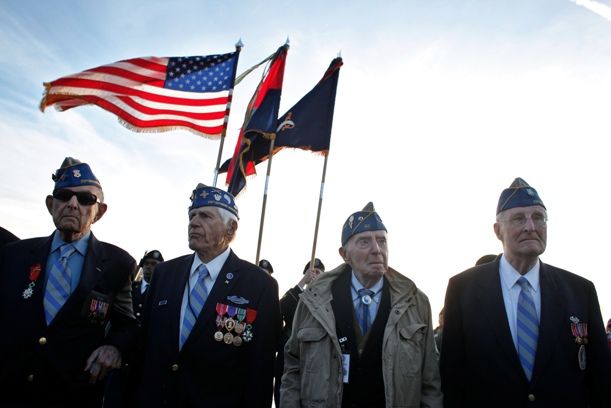 From left, World War II veterans of the U.S. 29th Infantry Division, Hal Baumgarten, 90 from Pennsylvania, Steve Melnikoff, 94, from Maryland, Don McCarthy, 90 from Rhode Island, and Morley Piper, 90, from Massachusetts, attend a D-Day commemoration, on Omaha Beach, western France , Friday June 6, 2014. Veterans and Normandy residents are paying tribute to the thousands who gave their lives in the D-Day invasion of Nazi-occupied France 70 years ago. World leaders and dignitaries including President Barack Obama and Queen Elizabeth II will gather to honor the more than 150,000 American, British, Canadian and other Allied D-Day troops who risked and gave their lives to defeat Adolf Hitler's Third Reich. (AP Photo/Thibault Camus)

Not many of the 150,000 Allied soldiers who slogged onto storm-torn beaches or parachuted into Normandy remain alive to pass on the legacy of that “longest day.” Some survivors stood, somber-faced and proud, alongside President Barack Obama, French President Francois Hollande and other world leaders as they paid tribute Friday to history's biggest amphibious invasion.

The veterans' hands, which once wrested France from Nazi occupation, saluted wizened faces. Some rose to their feet with difficulty. Thousands of onlookers applauded.

“Thank you for having been here in the summer of '44. Thank you for still being here on June 6, 2014,” Hollande told veterans and dignitaries on Sword Beach, one of five code-named beaches taken by the Allies 70 years ago. France's gratitude, he said, “will never be extinguished.”

Earlier, he paid special tribute to U.S. soldiers buried at the Normandy American Cemetery. “Vive l'Amerique! Vive la France! And long live the memory of those who fell here for our liberty.”

Taking the stand on Omaha Beach, a site he called “democracy's beachhead,” Obama said: “America's claim — our commitment to liberty, to equality, to freedom, to the inherent dignity of every human being — that claim is written in blood on these beaches, and it will endure for eternity.”

In all, 19 world leaders, more than 1,000 veterans and many others gathered to honor the troops and civilians who fell in mighty battles that helped bring Europe peace and unity.

Hundreds of Normandy residents and other onlookers applauded, then formed a human chain on the beach.

The glorious sun that rose as they arrived shone through the day on a land where paratroopers' corpses once hung from trees and medics dragged wounded soldiers from blood-swirled waves.

But the peace and stability that its wartime history brought continues to be challenged, as bloodshed in Ukraine poses new threats to European security and East-West relations. 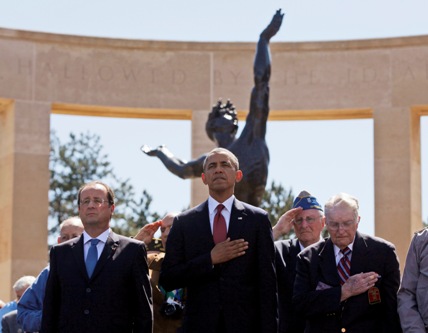 Hollande sought to use Friday's gathering to reconcile Russia with the West and Ukraine, and invited Ukraine's president-elect as well as Russian President Vladimir Putin. Putin met with Petro Poroshenko and Obama on the sidelines of the event.

“It is because France itself experienced the barbarity (of war) that it feels a duty to preserve peace everywhere, at the frontiers of Europe as in Africa,” Hollande said.

He was hosting the world leaders at a chateau in Benouville used as a hospital during the war, and in Ouistreham, a small port that was the site of a strategic battle on D-Day.

The leaders and veterans watched an elaborate interpretive dance on the beach that traced the horrors of World War II and Europe's painful road to healing afterward. Wartime film clips and evocative music accompanied the performance, which ended with fighter planes releasing red, white and blue smoke and gas flares shooting multicolored flames above the waves.

The D-Day invasion was a turning point in World War II, cracking Hitler's western front as Soviet troops made advances in the east. At least 4,400 Allied troops were killed the first day, and many thousands more in the ensuing three-month Battle of Normandy, before the Allies could march to Paris to liberate the French capital from Nazi occupation.

German Chancellor Angela Merkel and a few German veterans also took part in Friday's ceremony, as a gesture of the European unity that the Allied victory brought. Ceremonies large and small were taking place across Normandy and around the world.

A ceremony with Prince Charles at the Cathedral of Bayeux, just south of the beaches, left British veteran Richard England deeply shaken.

“It brought it all back, I'm afraid — all the boys I lost, my brother-in-law who was killed almost at the end, and the lovely chaps that fought with me who were older than me and are no longer with us,” said England, of the 8th Durham Infantry Battalion. “They weren't here, unfortunately.”

Several thousand veterans, family members and others gathered at the Normandy American Cemetery and Memorial, with its 9,387 white marble tombstones on a bluff overlooking Omaha Beach, the emotional centerpiece of American pilgrimages to honor the men killed in Normandy.

For the ceremony, small U.S. and French flags were placed in the ground at each grave.

In addition to the fallen troops, Allied bombardments killed an estimated 20,000 French civilians, and Hollande paid tribute to them Friday in Caen, which like many cities of Normandy was largely destroyed in the bombings.

France has only tentatively come to grips with the invasion's toll on civilians. The Allied bombings — especially the deadly onslaught in Normandy during the invasion launched on D-Day — were used as a propaganda tool by the Vichy government, which collaborated with the Nazis. Historians now believe that nearly as many French civilians died in Allied air raids as Britons during the German Blitz.

Jeffrey McIllwain, professor at the San Diego State University school of public affairs, will lay a wreath on behalf of educators who have lost students to wars in Iraq and Afghanistan — himself included.

He wants to keep the memory of D-Day alive as the number of survivors dwindles, and brought 12 students to Normandy for a course on the lessons of D-Day.

“I make them promise to bring their grandchildren,” he said, “to serve as a bridge to the next generation.”

Echoing that message, children accompanied world leaders as they walked down a red carpet to enormous viewing stands for the main international ceremony Friday.

Veteran Jack Schlegel, 91, of Albany, New York, came to Normandy for the 40th, 50th and 60th anniversaries of D-Day, and says he's honored to be here for the 70th.

“The president of the VFW (Veterans of Foreign Wars) told me he wants to see me at the 75th but I don't know,” said Schlegel, who was a paratrooper of the 82nd Airborne division. “My head's still here but I'm not sure about my body.”

Julie Pace in Colleville-sur-Mer, and Angela Charlton in Paris, contributed to this report.