Obama: US To Boost Military Presence In Europe 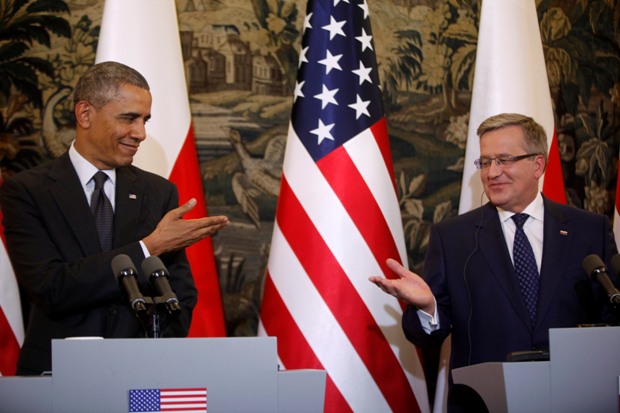 WARSAW, Poland (AP) — The United States is preparing to boost its military presence in Europe and at a cost of up to $1 billion, President Barack Obama said Tuesday, as tensions in the region simmer over Russia's aggressive actions in Ukraine.

Standing with Polish President Bronislaw Komorowski, Obama said the U.S. plans to send more military equipment and rotate additional American troops into the region. He called on lawmakers in Washington to provide the funding to sustain the effort.

Obama's announcement marks a significant departure from a two-decade trend toward a smaller U.S. military presence in Europe amid a shift by the Obama administration to a more visible and active naval and air power presence in the Asia-Pacific region. Just three years ago the Pentagon downgraded the top U.S. Army Europe commander from a four-star to a three-star general.

“Today, I'm announcing a new initiative to bolster the support of our NATO allies here in Europe,” Obama said at Warsaw's Belweder Palace. “Under this effort, and with the support of Congress, the United States will preposition more equipment in Europe.”

If approved, the funding will be used to increase military exercises and training missions on the continent, as well as rotations of air and ground forces, the White House said. Officials said Obama was also seeking to ramp up U.S. Navy participation in NATO deployments in the Black and Baltic Seas, plus working to boost the military capacity of non-NATO countries that in Russia's neighborhood, including Ukraine, Georgia and Moldova.

Obama's announcement came at the start of a three-country swing through Europe steeped in both historical significance and regional anxiety over the crisis in Ukraine.

A day before his first face-to-face encounter with Ukraine's newly elected president, Petro Poroshenko, Obama said he wants the U.S. and Ukraine to have good relations with Russia. But in a warning to Moscow, Obama said the U.S. has contingency plans to protect every member of NATO, and has been steadily developing those plans in recent years.

“Our contingency plans are not just pieces of paper on a shelf,” Obama said, adding that the U.S. must and does have the ability to put those plans into effect if needed.

At the same time, he called on other NATO members to step up by increasing their own role in the alliance's collective defense, even as he acknowledged that the U.S. has greater capabilities to bear that burden than its smaller allies.

“Everyone has the capacity to do their fair share, to do a proportional amount to make sure we have the resources, the planning, the integration, the training in order to be effective,” Obama said.

To that end, Komorowski announced that Poland intends to increase its own defense budget, up to 2 percent of the nation's gross domestic product. “It means it's a very tangible, very clear engagement,” Komorowski said through a translator.

The cautionary notes from Obama and Komorowski came a few days before a potential encounter between Obama and Russian President Vladimir Putin, who also planned to be in France for the 70th anniversary of the D-Day invasion that eventually led to Allied victory in World War II. Obama and Putin haven't met in person since the crisis began and have no meetings together scheduled, but White House officials haven't ruled out that they could cross paths.

Calling his relationship with Putin “businesslike,” Obama said it's possible for the U.S. to rebuild trust with Putin, but that doing so would take time and require Putin to use his influence to calm unrest in eastern Ukraine.

But he echoed previous warnings from the U.S. and other Western nations that “further provocation will be met with further costs.” The U.S. and Europe have already levied sanctions against Russian officials, but are holding off on further sanctions amid Putin's vow to respect the results of Ukraine's recent presidential election.

“The United States has reacted swiftly after Russia's illegal military actions in Ukraine,” Rasmussen said as he met with NATO defense ministers in Brussels. “And I appreciate that other allies have followed so that we can announce that all 28 allies are now contributing to reassurance measures.”

Obama's visit to Warsaw coincides with the 25th anniversary of Poland emerging from communism. Obama also planned to meet with Group of 7 leaders in Brussels before heading to France to mark the D-Day anniversary.

After arriving Tuesday morning in Warsaw, Obama and Komorowski mounted a display of military solidarity as they greeted each other in front of F-16 fighter jets in an airplane hangar. Obama also touted close U.S.-Polish ties before meeting with Prime Minister Donald Tusk.