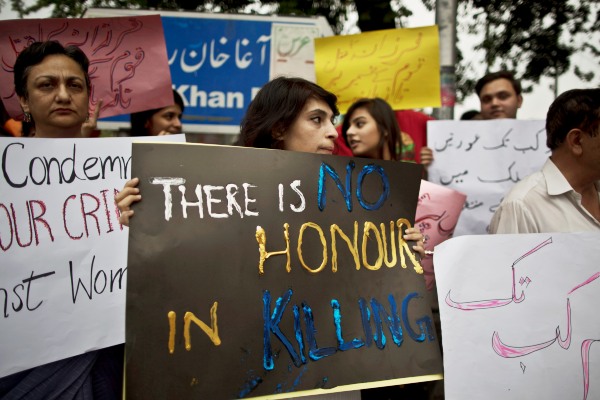 Members of Pakistan's civil society hold banners during a protest to condemn the killing of pregnant woman Farzana Parveen, who was stoned to death in Islamabad, Pakistan, Thursday, May 29, 2014. A senior police official in Pakistan said Mohammed Iqbal, husband of the woman stoned to death by her family earlier this week, was arrested for killing his first wife, though the case against him was withdrawn. Iqbal’s second wife was bludgeoned to death Tuesday in the eastern city of Lahore by family members. Iqbal and his wife's lawyer said the family was angry because they wanted her to marry someone else. (AP Photo/Muhammed Muheisen)

ISLAMABAD (AP) — Pakistani police said Friday that they have arrested four more people in connection with the killing of a pregnant woman who was beaten and stoned to death by her family for marrying without their permission.

The police arrested the four men late Thursday from their village in the Nankana district, said Nayab Haider Rizvi, the police spokesman in Lahore.

Police have already arrested the woman's father and say he has confessed to the killing. They are looking for two of her brothers.

The 25 year old was on her way to court with her husband on Tuesday when they were attacked by a group of her relatives who objected to her marriage. During the assault she was hit on the head with bricks from a nearby construction site and died.

The shocking case has focused attention on violence against women in Pakistan as well as the country's legal system.

Hundreds of women in conservative, Muslim-majority Pakistan are murdered each year in so-called “honor killings” by their husbands or male relatives over alleged sexual transgressions seen as bringing shame to the family. Activists say those who commit such crimes are often acquitted or given light sentences.

In a strange twist, authorities said Thursday that the woman's husband, Mohammad Iqbal, was accused of killing his first wife in 2009. But authorities and the man's relatives said the case was dropped after he was forgiven by the woman's family.

Under Pakistani law, those charged with a slaying can see their criminal case dropped if family members of the deceased forgive them or accept so-called “blood money.”

On Friday Iqbal threatened to commit suicide if the killers of his second wife are not brought to justice.

“I have said to reporters that if I don't get justice for the murder of my unborn child and wife, I will do self-immolation at the very same place where my wife was killed and will go from this world,” he told AP Television News.

Prime Minister Nawaz Sharif has condemned the fatal stoning and demanded authorities take action to find all the culprits.