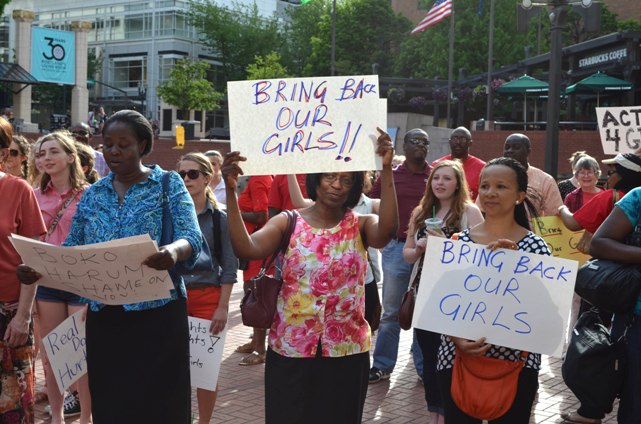 PHOTO: The Nigerian community of Oregon and S.W. Washington led a rally in Portland to support efforts to return around 200 kidnapped girls to their homes n Northern Nigeria. Activists also demanded access to education for girls and boys and an end to forced sex trafficking.

The girls and young women were kidnapped on April 15 from a school in the northeast Nigerian town of Chibok by an Islamic extremist group known as Boko Haram. The group's leader has threatened to sell most of the estimated 276 schoolgirls still being held into slavery unless the Nigerian government releases detained militants. Reports say some girls were taken across borders into Chad and Cameroon.

Chuck Prichard, a spokesman at the U.S. military's Africa Command in Germany, said Thursday that the 80 Air Force personnel were moved to Chad from a location inside the United States. Prichard did not say precisely where the 80 were previously stationed.

President Barack Obama told Congress in a letter Wednesday about the deployment. Obama said the service members will help with intelligence, surveillance and reconnaissance aircraft for missions over northern Nigeria and the nearby region.

A senior U.S. official said the drone is a Predator and will be in addition to the unarmed Global Hawks already being used. The new flights will be based out of Chad and allow the military to expand its search to that country. Initially the flights were largely over Nigeria.

Lt. Col. Myles Caggins said Wednesday that newly deployed forces will help expand drone searches of the region. About 40 of the troops make up the launch and recovering teams for the drone being deployed there and the other 40 make up the security force for the team.