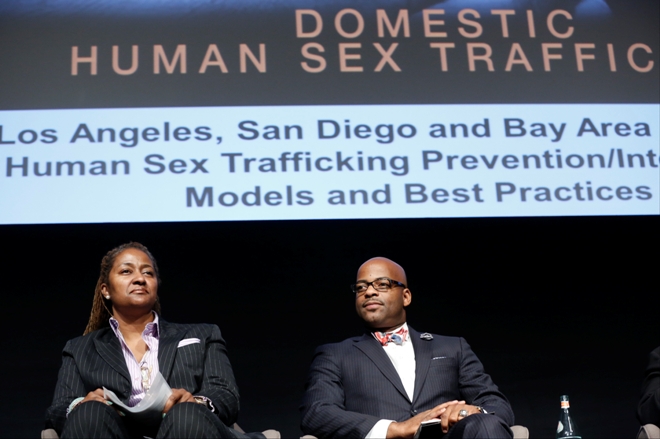 PHOTO: California state Senator Holly Mitchell (D-Los Angeles), left, and Assemblyman Isadore Hall, D-Compton, join prosecutors, lawmakers and police to plot a plan to eradicate human sex trafficking in California and across the nation during the Domestic Human Trafficking symposium in Los Angeles, Friday, April, 25, 2014. According to a 2005 International Labour Organisation paper, human trafficking — or sexual servitude and forced labor — brings in about $32 billion annually, making it the second most profitable criminal enterprise after illegal arms trafficking. The majority of that money, or nearly $28 billion, comes from forced commercial sexual exploitation. The vast majority of those trafficked are women and children, from all milieus of society. (AP Photo/Damian Dovarganes)

The report by the International Labor Organization found that global profits generated by the involuntary toil of an estimated 21 million workers have more than tripled since 2005, when the agency calculated the profits at $44 billion.

The director-general, Guy Ryder, said the report highlights the need "to eradicate this fundamentally evil but hugely profitable practice as soon as possible." He said many governments, employers and labor unions all needed to do more to stamp out abusive employment practices, including outright slavery.

Nearly two-thirds of the estimated profits, $99 billion, come from sexual exploitation, including prostitution and pornography, the report said. It found that women were most commonly the victims of forced employment in sex-related trades and domestic chores, while men and boys were more commonly exploited in agricultural, mining and construction work.

The report said the world's most developed countries, including the entire European Union, accounted for nearly a third of the illegal profits, $46.9 billion, while the rest of the Asia Pacific region generated $51.8 billion. Other regions had much lower totals.

It found that exploited workers generated much more money per head for their employers in the richest countries. Estimated profits in developed countries reached $34,800 per worker, while Africa registered the lowest per-capita profit rate of $3,900.

Worldwide, it found sexually exploited workers produced by far the highest profits for their employers: $21,800 per worker, versus just $2,500 on average for each farm laborer, and $2,200 for each domestic worker.

Ryder said governments needed to improve welfare support "to prevent households from sliding into the poverty that pushes people into forced labor." he said. "We need to improve levels of education and literacy so that household decision-makers can understand their own vulnerability to forced labor and know their rights as workers."