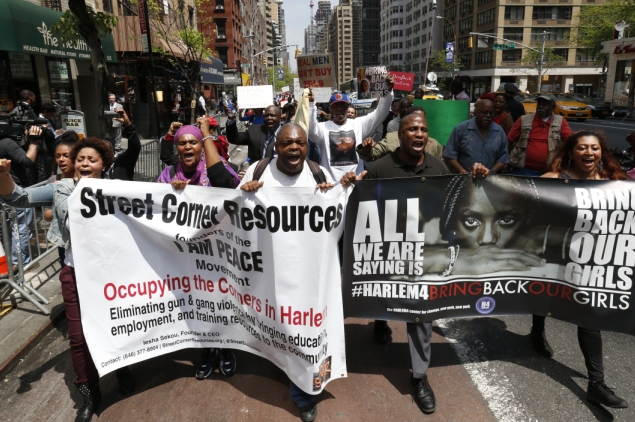 Demonstrators arrive in front of the Nigerian consulate after marching from Harlem during a rally, Saturday, May 10, 2014, in New York. Dozens gathered to join the international effort to rescue the 276 schoolgirls being held captive by Islamic extremists in northeastern Nigeria. As the worldwide effort got underway the weakness of the Nigerian military was exposed in a report issued by Amnesty International. On Sunday at a church service in Chibok, Nigeria, one of the teenagers who escaped said the kidnapping was "too terrifying for words," and she is now scared to go back to school. Sarah Lawan, a 19-year-old science student, spoke Sunday as Nigerians prayed for the safety of the 276 students still held captive. (AP Photo/Julio Cortez)

LAGOS, Nigeria (AP) — The president of Nigeria for weeks refused international help to search for more than 300 girls abducted from a school by Islamic extremists, one in a series of missteps that have led to growing international outrage against the government.

See events planned in Portland Wednesday May 14 and in Seattle Thursday May 15.

The United Kingdom, Nigeria's former colonizer, first said it was ready to help in a news release the day after the mass abduction on April 15, and made a formal offer of assistance on April 18, according to the British Foreign Office. And the U.S. has said its embassy and staff agencies offered help and were in touch with Nigeria "from day one" of the crisis, according to Secretary of State John Kerry.

Yet it was only on Tuesday and Wednesday, almost a month later, that President Goodluck Jonathan accepted help from the United States, Britain, France and China.

The delay underlines what has been a major problem in the attempt to find the girls: an apparent lack of urgency on the part of the government and military, for reasons that include a reluctance to bring in outsiders as well as possible infiltration by the extremists.

Jonathan bristled last week when he said U.S. President Barack Obama, in a telephone conversation about aid, had brought up alleged human rights abuses by Nigerian security forces. Jonathan also acknowledged that his government might be penetrated by insurgents from Boko Haram, the extremist group that kidnapped the girls. Last year, he said he suspected Boko Haram terrorists might be in the executive, legislative and judiciary arms of government along with the police and armed forces.

The waiting has left parents in agony, especially since they fear some of their daughters have been forced into marriage with their abductors for a nominal bride price of $12. Boko Haram leader Abubakar Shekau called the girls slaves in a video this week and vowed to sell them.

"For a good 11 days, our daughters were sitting in one place," said Enoch Mark, the anguished father of two girls abducted from the Chibok Government Girls Secondary School. "They camped them near Chibok, not more than 30 kilometers, and no help in hand. For a good 11 days."

The military has denied that it ignored warnings of the impending attacks. Maj. Gen. Chris Olukolade, a Defense Ministry spokesman, told The Associated Press the major challenge has been that some of the information given turned out to be misleading.

And Reuben Abati, one of Jonathan's presidential advisers, denied that Nigeria had turned down offers of help.

"That information cannot be correct," he said. "What John Kerry said is that this is the first time Nigeria is seeking assistance on the issue of the abducted girls."

In fact, Kerry has said Nigeria did not welcome U.S. help earlier because it wanted to pursue its own strategy. U.S. Sen. Chris Coons said Friday that it took "far too long" for Jonathan to accept U.S. offers of aid, and he is holding a hearing next week to examine what happened. A senior State Department official also said Friday that the U.S. offered help "back in April, more or less right away."

"We didn't go public about it because the consensus was that doing so would make the Nigerians less likely to accept our help," said the official, who spoke on condition of anonymity because the issue concerns internal discussions between governments.

Nigeria is a country of 170 million in West Africa that receives hundreds of thousands of dollars in aid from the U.S. every year to address a rising insurgency in the north and growing tensions between Christians and Muslims. The northeast, where the girls were kidnapped, is remote and sparsely populated, far from the southern oil fields that help to power Africa's biggest economy.

The abductions came hours after a massive explosion in the Nigerian capital of Abuja killed at least 75 people, just a 15-minute drive away from Jonathan's residence and office. Chibok government official Bana Lawal told the AP that at about 11 p.m. on April 15, he received a warning via cell phone that about 200 heavily armed militants were on their way to the town.

Lawal alerted the 15 soldiers guarding Chibok, who sent an SOS to the nearest barracks about 30 miles away, an hour's drive on a dirt road. But help never came. The military says its reinforcements ran into an ambush.

The soldiers in Chibok fought valiantly but were outmanned and outgunned by the extremists. They then made their way to the Chibok girls school, where they captured dozens of girls. Police say 53 escaped on their own and 276 remain captive.

The following day, Jonathan was photographed dancing at a political party rally in northern Kano city, and newspapers asked what their leader was doing partying when the country was in shock over the kidnappings. The Defense Ministry also announced that all but eight of the kidnapped girls had been freed, quoting the school principal. When the principal objected and demanded the military produce the rescued girls, it retracted its statement.

Frantic, some Chibok fathers made their way into the dangerous Sambisa Forest themselves, where the girls were last seen. But they turned back when villagers in the forest warned that Boko Haram would kill both them and their daughters.

The parents said the forest dwellers did not see any soldiers looking for the girls. And a state senator said that every time he gave the military information from people who had caught sight of the girls, the insurgents moved camp.

The military denied any collusion with the extremists and said it had been pursuing every lead. On May 1, it handed over responsibility for all information about the girls to Borno state officials.

For two weeks, Jonathan did not discuss the abducted girls in public. In his Easter Day message, he said only that his thoughts were with the families of those killed by insurgents and the dozens wounded by the Abuja bombing.

Last week, angry Nigerian women, including at least two mothers of abducted girls, took to the streets in Abuja to protest the government's failure to rescue the girls. Jonathan did not meet with them. Instead, he cancelled the weekly executive council meeting to offer condolences to his vice president, whose brother had died in a car crash.

His wife, Patience Jonathan, that night called a meeting to "investigate" what happened at Chibok, and said the kidnappings were engineered to hurt the name of her husband and his government. She accused the leader of the protests of being a Boko Haram member, detained her and released her after several hours.

Finally, at a Labor Day rally, Jonathan made a public pronouncement that "the cruel abduction of some innocent girls, our future mothers and leaders, in a very horrific and despicable situation in Borno state, is quite regrettable." He pledged, "We must find our girls."

On May 2, he set up a "largely fact-finding" committee to put together a strategy for rescuing the girls. Last Sunday, he raised eyebrows by saying on TV that he was "happy" the missing girls were "unharmed," but then admitting that the government had no new information from the abductors.

Jonathan also hinted Sunday at why, apart from national pride, initial offers of help may have been ignored. Even before the kidnappings, he complained, he had asked Obama in two telephone calls for help with intelligence on the extremists but received questions about alleged military abuses. Jonathan said he responded that the U.S. leader should "send someone to see what we are doing" on the ground, and "don't just say there is some matter of alleged abuses."

The Nigerian military is accused of widespread killings that go beyond members of Boko Haram. The Associated Press documented last year how thousands of people are dying in military detention, through the mortuary records of a Maiduguri hospital. And Amnesty International reported in October that hundreds of detainees were killed, tortured and starved, or even asphyxiated in overcrowded cells.

On May 4, Boko Haram abducted at least 11 more girls, aged 12 to 15, from two villages in the northeast. One of them managed to escape. And the Chibok girls are still missing, in a conservative society where girls who are raped can be stigmatized.

"It is very painful. I know my daughter, very obedient and very religious ... she wanted to be a doctor," Mark said. "I was eager to see my daughter with such a hope. Now....I don't know what I can explain to the world."

Associated Press writers Lekan Oyekanmi and Bashir Adigun in Abuja, Nigeria, contributed to this report along with Lara Jakes and Darlene Superville in Washington and Gregory Katz in London.