British and US Experts To Help Find Kidnapped Nigerian Girls 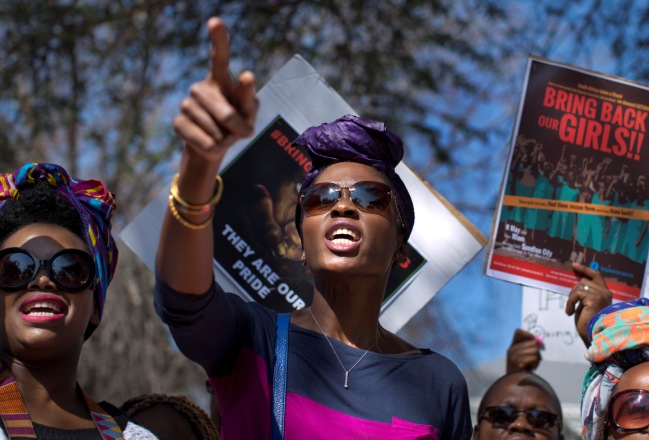 South Africans protest in solidarity against the abduction three weeks ago of hundreds of schoolgirls in Nigeria by the Muslim extremist group Boko Haram and what protesters said was the failure of the Nigerian government and international community to rescue them, during a march to the Nigerian Consulate in Johannesburg, South Africa Thursday, May 8, 2014. The kidnapping has ignited a viral social media campaign that has brought renewed attention to Boko Haram's campaign of violence, and protests around the world. (AP Photo/Ben Curtis)

BAUCHI, Nigeria (AP) — British experts arrived in the Nigerian capital on Friday to help find at least 276 girls being held by Islamic militants in northeastern Nigeria as an international effort began taking hold.

The experts are expected to work closely with U.S. officials and agents in the search for the missing girls, the British government said as Boko Haram militants continued to stage attacks in northeastern Nigeria. China and France have also promised help, and the deputy prime minister of Spain, Soraya Saenz de Santamaria, told reporters in Madrid on Friday that her government had decided to make available a specialist police team to assist, if Nigeria approves.

Britain said its aim was not only to help with the current crisis but to defeat Boko Haram. The group's name can be translated as Western education is sinful. Islamic scholars across the world have condemned the group saying education is a human right.

“The team will be considering not just the recent incidents but also longer-term counter-terrorism solutions to prevent such attacks in the future and defeat Boko Haram,” the Foreign & Commonwealth Office said in a statement Friday.

A local government official confirmed that the Islamic extremists bombed a bridge linking the town of Gamboru to the Borno state capital, Maiduguri, the headquarters of the Nigerian military offensive. Gamboru was attacked on Monday by Boko Haram, leaving many dead. Estimates of the death toll from that attack ranged from 100 to as many as 300. Local security officials said on Friday that Boko Haram militants bombed the bridge as they retreated following the attack on Gamboru's main market, where at least 50 bodies have since been discovered from the debris of burned shops.

Communications with the remote town are difficult and it was not immediately possible to reconcile conflicting accounts of when the bridge was bombed. One account said Monday while another said Thursday.

Local traders in Gamboru said Friday that their businesses were suffering, with trailers and heavy trucks now stranded on either side of the damaged bridge.

“We are in trouble,” said Gamboru resident Mamman Abu.

The bombing of the bridge also prevents army convoys reaching Gamboru while leaving the way open for the insurgents to escape across a strategic bridge into neighboring Cameroon — a bridge leading into mountains where the militants are known to have hideouts in caves.

The mass kidnapping of the schoolgirls has focused the world's attention on Boko Haram, and on the many civilian victims of the extremists.

President Goodluck Jonathan said at an economic forum on Thursday: “I believe that the kidnap of these girls will be the beginning of the end of terror in Nigeria.”

But his government stands accused of being slow to mount operations to rescue the girls, who were kidnapped on April 15, charges the government vehemently denies. The military said in a strong statement late Thursday that it opposed what it said were the attempts of some civic groups to “drag the military into politics.” 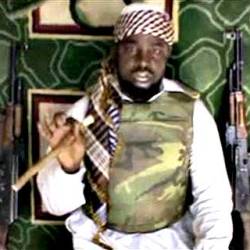 This file image made available Wednesday, Jan. 10, 2012, taken from video posted by Boko Haram sympathizers, shows the leader of the radical Islamist sect Imam Abubakar Shekau. Boko Haram has claimed responsibility for the April 15, 2014, mass abduction of nearly 300 teenage schoolgirls in northeast Nigeria. Even before the kidnapping, the U.S. government was offering up to a $7 million reward for information leading to the arrest of Shekau, whom the U.S. has labeled a specially designated global terrorist. (AP Photo/File)

Boko Haram has staged many attacks in northeastern Nigeria over the years, a campaign of bombings and massacres that has intensified in recent times despite a strong military presence there. Since May 2013 there has been a state of emergency in three northeastern Nigerian states wracked by Boko Haram violence.

Boko Haram has killed more than 1,500 people this year. The militants, who want to impose Islamic Shariah law on Nigeria, abducted more than 300 girls from a boarding school in the northeast town of Chibok. Fifty-three escaped but 276 remain captive. In a video seen by The Associated Press, Boko Haram's leader threatens to sell the girls into slavery.

The government of Borno state, where Chibok is located, on Thursday identified the girls who escaped, potentially subjecting the girls to stigma in this conservative society.

The government said in a statement received Friday that the girls it identified by name include those who fled the day they were kidnapped and those who escaped from Boko Haram camps days later. It did not explain the decision to name the girls.

Chibok residents staged a street protest Friday to press Borno's government to do more to find the missing girls.

Top religious scholars working under the world's largest bloc of Islamic countries last week said they strongly condemn the kidnapping of the schoolgirls and called for their immediate release.

The group's leader has used Islamic teachings as justification for threatening to sell the girls into slavery.

The Islamic Fiqh Academy, which is based in Saudi Arabia and dedicated to the advanced study of Islam, said that this “crime and other crimes committed by the likes of these extremist organizations contradicts all humanitarian principles and moral values and violates the provisions of the Quran and Sunnah,” or teachings of the Prophet Muhammad.

The academy is part of the Organization of Islamic Cooperation, which is comprised of some 57 Muslim majority member-nations.

Also on Thursday, the OIC's Independent Permanent Human Rights Commission said Boko Haram is misguided to claim that the abduction of the girls and the threat to sell them off as slaves is in conformity with the injunctions of Islam. The rights body described the abduction of the schoolgirls as a “barbaric act”.

“Right to education is a fundamental human right, and is in consonance with the basic tenets of Islam,” the rights body said.

Muslims around the world have spoken out against the kidnappings.