Gunmen Kill Somali Lawmaker at his Home in Mogadishu 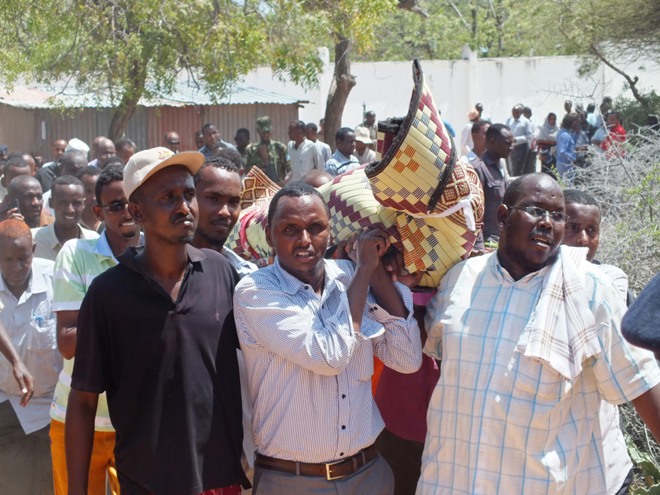 Mourners carry the body of Somali lawmaker Abdiaziz Isaq Mursal for burial in the Somali capital, Mogadishu, Tuesday April 22, 2014. Two gunmen belonging to an Islamic extremist group shot and killed the Somali legislator Monday as he stepped out of his home in the capital, the second fatal attack on a member of parliament in as many days, police said. (AP Photo/Farah Abdi Warsameh)

MOGADISHU, Somalia (AP) — Two gunmen belonging to an Islamic extremist group shot and killed a Somali legislator on Tuesday as he stepped out of his home in the capital, the second fatal attack on a member of parliament in as many days, police said.

Al-Shabab claimed responsibility in a radio broadcast for the attack on Abdiaziz Isaq Mursal. He was ambushed in the Madina district of Mogadishu, said senior police officer Ali Hassan.

On Monday legislator Isaq Mohamed Rino was killed in a car bombing that also wounded a lawmaker with whom he was traveling. Al-Shabab, which has continued to stage attacks in Mogadishu despite being ousted from the seaside capital in 2011, also claimed responsibility for that killing.

The targeting of members of parliament marks a turning point. The parliament is emerging as a pillar of democracy in the Horn of Africa nation.

Al-Shabab militants have previously carried out attacks against United Nations staff, government officials, African Union peacekeepers and last year on an upscale mall in Nairobi, the capital of neighboring Kenya which has sent troops into Somalia to battle al-Shabab.

Somali Prime Minister Abdiweli Sheikh Ahmed condemned the Tuesday attack and expressed shock at the "horrific and deplorable killings" of the two lawmakers.

"The use of terror will not derail us from the progress made in securing Somalia, it only serves to unite and strengthen our resolve to defeat all forms of terrorism and violence," Ahmed said in a statement. 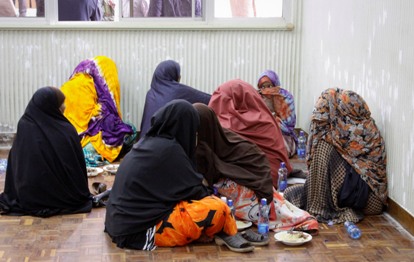 In this Wednesday, April 9, 2014 file photo, detained Somali women sit inside a makeshift cell before being fingerprinted and screened at the Kasarani sports stadium, Nairobi, Kenya. Kenya deported 91 more Somali nationals to Mogadishu on Thursday, April 17, 2014, the second wave of forced deportations that UNHCR warned could be endangering Somalis in need of protection from militants. But it is because of the steady drumbeat of terror attacks blamed on al-Shabab and its sympathizers that Kenya is now carrying out a massive security operation that threatens to open the country’s ethnic fault lines. Police say they are not targeting Somalis but instead are hunting terrorism suspects and illegal aliens. But rights groups say Somalis are bearing the brunt of police actions, including monetary shakedowns and physical and sexual abuses. Most Kenyans applaud the operation. (AP Photo/Khalil Senosi, File)