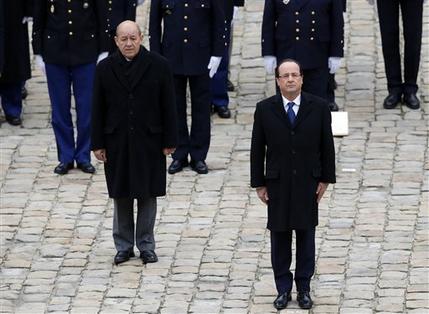 France will send 1,000 troops to Central African Republic under an expected U.N.-backed mission to keep growing chaos at bay, the defense minister said Tuesday - boosting the French military presence in Africa for the second time this year.

Jean-Yves Le Drian made the announcement a day after a top U.N. official warned of mass atrocities and possible civil war in CAR, one of the world's poorest countries, which has been in turmoil since rebel groups joined forces in March and overthrew the president. The rebels have been accused by rights groups of committing scores of atrocities including killings, rapes and conscription of child soldiers. France's top diplomat said last week the country was "on the verge of genocide."

"It's in collapse and we cannot have a country fall apart like that. There is the violence, massacres and humanitarian chaos that follow a collapse," Le Drian told Europe 1 radio. "It will be a short mission to allow calm and stability to return."

In Mali, France has about 2,800 troops taking part in an operation that began after rebels and al-Qaida-linked militants moved to take over the capital last winter.

Le Drian dismissed any comparisons between the Mali and CAR missions.

"In Mali there was an attack of jihadists, terrorists who wanted to transform Mali into a terrorist state. This is a collapse of a country with a potential for religious clashes," he said. "France has international responsibilities, is a permanent member of the Security Council, has history with Central African Republic, and the United Nations is asking us to do it."

France already has some 420 soldiers in Central African Republic - mostly to protect the airport in the capital Bangui. The country has asked France to increase that force and French diplomats have announced plans to circulate a draft Security Council resolution that will call for additional support for the 3,000-strong force led by the African Union now in the country.

A French defense official, who was not authorized to speak publicly about the mission, said the U.N. mandate would authorize French troops to end the massacres and restore order throughout the country.

France hopes that a resolution will be passed before the start of a summit in Paris next week focusing on security issues in Africa, French diplomats have said.

The expanded French deployment would happen after that. France would accompany an African force of troops from neighboring countries, and the French mission would be expected to last about six months, Le Drian said.

"It's total disorder. You have seven surgeons for a population of 5 million, an infant mortality rate of 25 percent in some areas and 1.5 million people who have nothing, not even food, and armed gangs, bandits, etc," he told France 2 television Thursday.

At the United Nations on Monday, French ambassador Gerard Araud said an increased French deployment would be "a bridging force" until an African force is fully operational - when France would take a back-up role.

France, a former colonial powerhouse in West Africa, has a greater military presence in the region than any other Western country - with thousands of troops in places including Senegal, Chad, Ivory Coast and Gabon.

In a briefing Monday to the Security Council, U.N. Deputy Secretary-General Jan Eliasson said the situation in CAR was deteriorating so fast that a U.N. peacekeeping force may soon be the only option.

He said the country is becoming "a breeding ground for extremists and armed groups" and never-before-seen sectarian violence between Muslims and Christians.