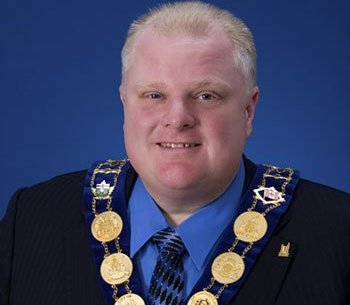 Toronto's City Council voted Friday to strip embattled Mayor Rob Ford of his ability to govern in an emergency and to appoint and dismiss committee chairs -- unprecedented moves aimed at reining in the controversial politician.

Despite admitting last week that he had smoked crack cocaine in a “drunken stupor” about a year ago, Ford has defiantly said he will not leave his job and vowed Friday to challenge the actions in court.

“Obviously, I can't support this,” Ford told council members, warning that the legal fight will cost taxpayers “an arm and a leg.”

But, he added: “I perfectly understand where they're coming from. ... I would have supported what they're doing. I want to move on. I'm not mad at anybody.”

The City Council meeting reflected the tragicomedic state of municipal affairs in Toronto, where police have investigated the mayor for smoking crack cocaine and other indiscretions. Some council members compared the move to strip Ford of his duties to a coup d'etat.

Councillor John Filion said the actions were being taken “reluctantly” but they “sadly are both warranted and necessary.”

The mayor's brother, Councilor Doug Ford, chastised fellow council members, saying they didn't have the “moral or legal authority” to strip an elected official of his responsibilities.

Councillor Anthony Perruzza said he understood the need to bring stability to the city but called Friday's action a “dangerous precedent.”

“If you win an election for mayor, you are the mayor,” he said. “That is the people's will. ... I don't want to use the word coup d'etat. That would be over the top.”

The council chambers erupted with laughter.

The first of two motions, approved by a 39-3 vote, took away Ford's ability to appoint and dismiss committee chairs, giving him less control over policy. In the past, the influential chairs followed the mayor's orders for fear of losing their posts.

The second motion, stripping Ford's power during an emergency, was approved 41-2 and is seen as largely symbolic since emergency response decisions are made collectively by the council. Filion said the city was fortunate Ford had not been impaired during a crisis.

“Council delegated those powers and council has the ability to take those powers away,” City Solicitor Anna Kinastowski said at one point in the meeting.

Moments before the final vote, Ford said: “I would've supported what they're doing” if another mayor did what he did, “but since it's me, I have to support myself.”

'Today I acted on complete impulse'

While fighting for his job Thursday, Ford added to his growing list of missteps.

Early in the day, a scrum of reporters approached Ford to ask him about new allegations of drunkenness, drug use and the verbal and physical abuse of aides.

In the course of answering, he denied a female staffer's allegation that he sought to perform oral sex with graphic language of his own, stunning reporters.

Later in the day, he backtracked.

With his wife at his side, he went back before reporters to say he had been under “tremendous, tremendous stress” and was getting unspecified support from “a team of health care professionals.” But he called the latest allegations “100% lies.”

“When you attack my integrity as a father and as a husband, I see red. Today I acted on complete impulse in my remarks,” Ford said. He took no questions from reporters, who shouted sharp inquiries at him as he entered the office.

“Mayor Ford, why should we believe you? Why would you subject your family to this?” one asked.

“What's the matter with you, Mr. Mayor?” another said.

The Toronto City Council voted 37-5 on Wednesday to ask Ford to take a leave of absence, and most members turned their backs on him when he addressed their Thursday meeting.

Doug Ford, a city council member, is urging his brother to take a leave of absence, a council source told CNN on condition of anonymity. The source did not want to be identified.

The meeting Friday could lead to more Monday, when the council says it expects to consider a motion to delegate duties not assigned by statute to the mayor. If approved, the motion would strip Ford of most of his duties.

Among other things, the motion calls for reallocating the operating budget of the office of the mayor to the city clerk, according the council's agenda published online.

Bu,t in a new twist, Canada's Sun News Network announced that the Ford brothers will begin hosting their own TV show on Monday. The show, “Ford Nation,” picks up where the two brothers left off on a talk radio show that ended its run last week, the network said on its website.

A headline on that site posed the question, “Canada's Ultimate Reality Show?” And it quoted Doug Ford saying, “Rob is like Howard Stern or Rush Limbaugh” and “You just never know what he is going to say.”

“Mayor Ford seems to be in a no-holds-barred mode,” the network said. “There is no filter. There is no careful treading.”

Critics of Sun News Network have described its conservatism as “Fox News North,” according to a story about its launch in 2011 by the Toronto Globe and Mail.

The mayor recently confessed to purchasing illegal drugs in the past two years, while he was in office. But he has steadfastly refused to step down, saying the voters of Canada's largest city should decide his fate in 2014.

The latest allegations surfaced Wednesday in more than 500 pages of court documents that police used to get a search warrant for Alexander Lisi, Ford's friend and occasional driver, whom police accuse of marijuana possession and trafficking.

Ford responded Thursday morning by threatening legal action against former staffers who claimed the mayor brought a woman appearing to be an escort to his office and drank alcohol while driving. The documents include police interviews with former staff members, information obtained from surveillance crews and cameras, and even an examination of the mayor's garbage.

Several staffers said they were asked to buy alcohol for the mayor of Canada's largest city. One incident described by a former staffer alleged that Ford, while driving, stopped the vehicle, guzzled some vodka, and drove on.

The allegations have not been substantiated by investigators, and Ford faces no criminal charges. He called the allegations “outright lies.”

On Thursday, Ford also said the so-called “escort” wasn't a prostitute, but a family friend. He added that such allegations “hurt my wife.”