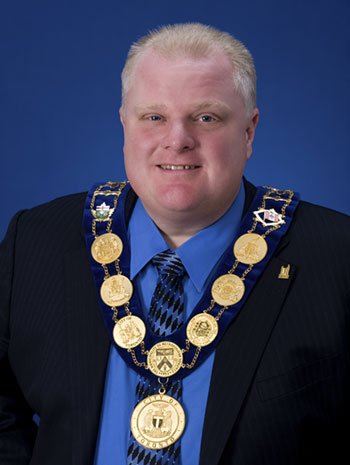 As the Toronto City Council prepared for a vote on whether to recommend that the city's embattled mayor resign, Rob Ford said he is not going anywhere.

“I'm definitely keeping this job,” Ford said during a City Council meeting Wednesday. “I am not leaving here.”

It was Ford's first appearance before the council since admitting to having smoked crack cocaine. He further admitted to the council that he has purchased illegal drugs within the past two years, a period during which he was in office.

Ford's insistence on staying in office remains unchanged. He stated once again that he has been a good mayor and that voters will decide during next year's election whether to keep him or not.

The motion that the City Council will consider, if passed, will urge the mayor to take a leave of absence. The council does not have the power to force the mayor from his post.

At times appearing exasperated during the questioning, Ford apologized profusely.

Ford said he is being subjected to a “public flogging,” and that the experience has been the most humiliating thing in his life, maybe the worst week in his life next to his father's death.

Despite the admission of drug use and of heavy drinking, Ford flatly denied that he is addicted to alcohol or drugs. He said he took drugs and got drunk “out of sheer stupidity” in a few isolated incidents.

No criminal charges have been filed against Ford, who said he is not cooperating with police on the advice of his lawyer. As mayor, he is a strong supporter of the police, but his attorney “told me not to talk to the police.”

The City Council meeting was tense at times. At one point, Ford's brother, Councilor Doug Ford, accused the mayor's opponents of hypocrisy.

He challenged other councilors to stand up if they had ever smoked marijuana, saying he knew that they had.

“Don't come across that you're holier than thou, because you're not,” Doug Ford said.

If Rob Ford was nervous about the grilling, he didn't show it beforehand.

The day before the council meeting, he was selling and autographing bobblehead dolls of himself for charity.

Last week, after months of dodging allegations, Ford told reporters that he smoked crack cocaine about a year ago -- probably, he said, during a “drunken stupor.”