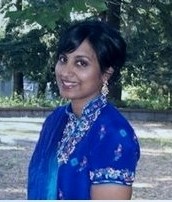 A Muslim Portlander, born on the Fourth of July, Ahmed-Shafi's career and community activism typified a love of country and a love of community even when the two at times seemed to be at odds with each other.

Ahmed-Shafi was Public Involvement Best Practices Coordinator at the City of Portland Office of Neighborhood Involvement, and leaves behind a huge community of friends, colleagues and associates.

Ahmed-Shafi served on the board of directors and was active with the Center for Intercultural Organizing for a number of years. Before being named as Best Practices Coordinator, Ahmed-Shafi started out with Southeast Uplift as a neighborhood organizer.  She had just earned a graduate degree in Organizational Development from the Leadership Institute of Seattle, Graduate College of Saybrook University, in June.

As a volunteer for KBOO Community Radio, Ahmed-Shafi anchored the KBOO Evening News for one night each week for several years. She was also a founding member of the Asian Pacific American Compass news and public affairs collective, conducting interviews on issues impacting the APA community.

The APA Compass episode marking the U.S. assassination of Osama Bin Laden in 2011, which featured Ahmad-Shafi and Muna Abshir Muhamud together with host Sarika Mehta talking about stereotyping of the Muslim community, was particularly popular.

"ONI staff are in communication with Afifa's family and friends and will share info when a memorial service in Portland is planned," said Brian Hoop, ONI's Community and Neighborhood Involvement Center manager. "Till then please keep her family in your thoughts."

"Today I find my self having the incomprehensible task of conveying that our beloved friend and colleague, Afifa Ahmed-Shafi, suddenly and unexpectedly passed away last night," Ahmed-Shafi's boss, ONI director Amalia Alarcon de Morris, said in an email circulated Monday. "While there is not much information that is certain right now, doctors indicate that she may have had an undiagnosed brain tumor that caused her death.

"Afifa's funeral will be held on Wednesday in the tri-cities area in Washington.  Her family welcomes all who want to and are able to make the trip.  As soon as we get details we will send out a follow-up email for those who want to go.

"Afifa was a bright light in our community.  Brilliant, kind, warm, with a wonderful sense of humor.  Her passion for, and commitment to, social justice guided her life and her work.  She taught us every day and made us better.  Afifa was one of a kind and we will forever miss her.  We are devastated by her loss."